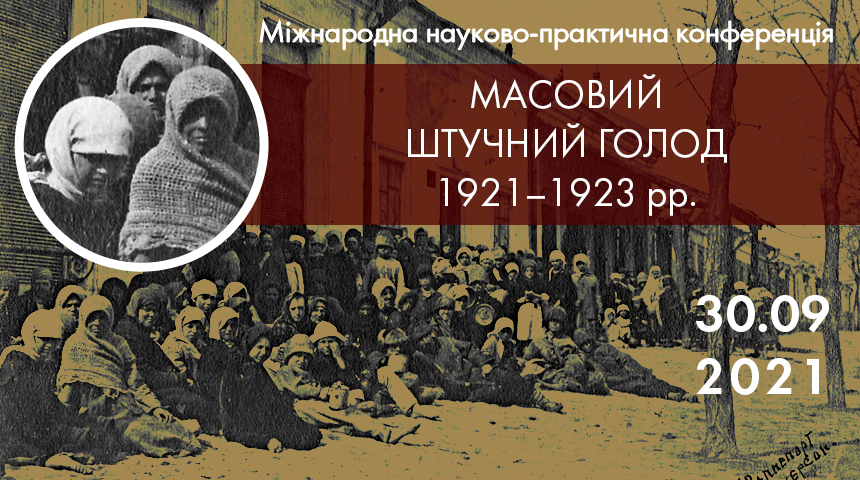 This year the Ukrainian community commemorates the 100th anniversary of the mass man-made famine of 1921-1923.

The International Scientific and Practical Conference “Mass Man-made Famine of 1921-1923”, which took place on September 30, 2021, was dedicated to this sad date. The conference was organized by the Holodomor Research Institute of the National Museum of the Holodomor-Genocide. The event was co-organized by the Ministry of Culture and Information Policy of Ukraine, the National Museum of the Holodomor-Genocide, the State Archives of the Security Service of Ukraine, the Taras Shevchenko Kyiv National University, the Ukrainian Genocide Famine Foundation (Chicago, USA), the Ukrainian World Congress and other scientific institutions.

Leading researchers from Ukraine, the USA, Canada, and Poland took part in the online event – a total of 18 doctors and 26 candidates of science.

Olesia Stasiuk, Director General of the National Museum of the Holodomor Genocide, expressed gratitude to the participants for their contributions to the study and for spreading the truth about crimes against the Ukrainian nation. “Only in unity can we shed light on the truth and win the fight for the opportunity to tell the truth about the crimes committed against the Ukrainian nation,” she said, adding that Soviet terminology and myths can still exist in scientific texts on the famine of 1921-1923. , in particular, the one of drought and crop failure. ” We can go around in circles for a long time if we write and research the history of these crimes, using Soviet terms and myths,” she emphasized and recalled that in May 1921, Volodymyr Lenin wrote: “The harvest in the south is excellent, so the question of life and death for us is to collect 200-300 million poods of bread from Ukraine.”

During the conference, participants discussed a range of topics. In particular:

Preconditions and course of the mass man-made famine of 1921–1923 in Ukraine.

Preconditions, course, consequences of the mass man-made famine of 1921–1923 in the Crimea.

Socio-economic, socio-political, demographic, moral, and psychological consequences of the mass artificial famine of 1921–1923 in Ukraine.

Resistance of Ukrainians to the repressive actions of the communist totalitarian regime.

Remembrance of mass man-made famine of 1921–1923 in Ukraine: scholar research and instrumentalization in politics.

Vasyl Marochko, a leading researcher at the Institute of History of Ukraine of the National Academy of Sciences of Ukraine, Doctor of Historical Sciences, Professor, reminded that the territory of the mass man-made famine of 1921-1923 was not limited to five provinces, as it is usually written in Soviet historiography. At least 7 of the 9 provinces went on hunger strike. It was also a mass famine by other criteria: it covered both the village and the city, as well as all socio-professional groups (farmers, workers, intellectuals).

“Having seized power in Russia, Lenin and his associates hoped to receive Ukrainian bread for free to stay in power,” said Volodymyr Serhiychuk, a professor at Taras Shevchenko Kyiv National University, a Doctor of Historical Sciences. – In the conditions of then-hungry Russia, it was essential for them. However, the UPR government, as we know, refused to sell food without prepayment, and this angered Petrograd and provoked aggression against the young Ukrainian state. “

An electronic version of the materials of the International Scientific and Practical Conference “Mass Man-made Famine of 1921-1923” was also published. You can download it at the following link:

A collection of conference materials