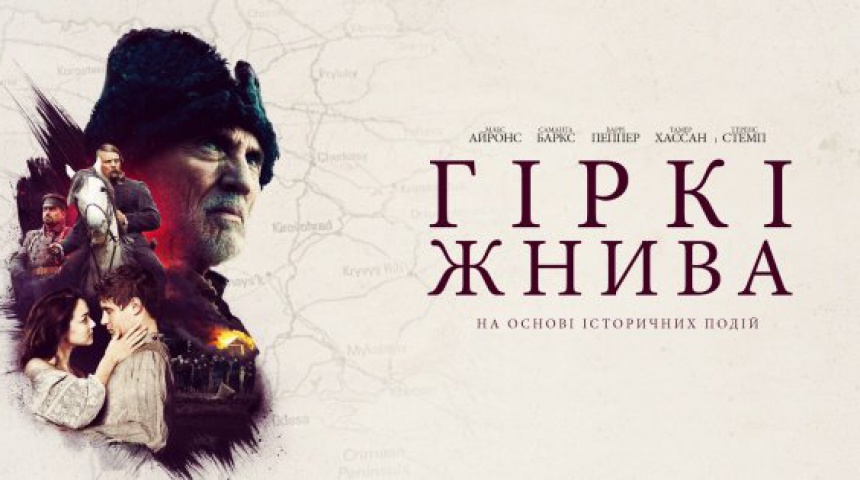 Based on one of the most overlooked tragedies of the 20th century, Bitter Harvest  is a powerful story of love, honor, rebellion and survival as seen through the eyes of two young lovers caught in the ravages of Joseph Stalin’s genocidal policies against Ukraine in the 1930s. As Stalin advances the ambitions of communists in the Kremlin, a young artist named Yuri ( Max Irons ) battles to survive famine, imprisonment and torture to save his childhood sweetheart Natalka ( SamanthaBarks ) from the “Holodomor,” the death‑by‑starvation program that ultimately killed millions of Ukrainians. Against this tragic backdrop, Yuri escapes from a Soviet prison and joins the anti‑Bolshevik resistance movement as he battles to reunite with Natalka and continue the fight for a free Ukraine.

First‑time screenwriter Richard Bachynsky‑Hoover had carved out a comfortable life for himself, working as an actor in various TV and feature film roles. But the Canadian’s career shifted gears dramatically after he visited his ancestral homeland in Ukraine. Inspired by his travels, Bachynsky‑Hoover became obsessed with telling the story of Stalin’s “Holodomor,” a forced starvation policy that decimated Ukraine’s population in the early 1930s. He spent several years studying Polish, Russian and Ukrainian history books before writing the first draft of Bitter Harvest.

In 2011, Bachynsky‑Hoover approached Toronto‑based financier Ian Ihnatowycz with an early version of the script. “I often see interesting proposals,” says Ihnatowycz, well known in Canada for his numerous philanthropic activities. “Richard sent me his screenplay and it really captured my interest. I’d never read a screenplay before so I tried to imagine how it would play on the big screen.”

Ihnatowycz, whose own family fled Ukraine in the late 1940s, did some digging. “I discovered there had been a few documentaries and some interesting Ukrainian‑language films portraying the Holodomor, but there hadn’t really been any English‑language features,” he says. “I became intrigued by the opportunity and understood the importance of telling the story of this terrible famine genocide to a much broader global audience. I wanted to portray it in a way that touched human sensibilities so that audiences could experience the emotion of what happened in Ukraine.

“Richard had approached a few people for financing in the film industry unsuccessfully,” Ihnatowycz continues. “I came to the conclusion that the film was too important to not get done. So I decided to serve as the film’s sole financier, funding the film in its entirety. Recognizing the need to develop the screenplay further and get a team of professionals involved, we got in touch with George Mendeluk.”

Like Hoover and Ihnatowycz, Mendeluk grew up in Ontario with Ukrainian parents who emigrated from Europe in the 1940s. Hoover and Mendeluk had something else in common: Hoover performed a small role in the 1999 movie Men of Means, which Mendeluk directed. “Years later, when he approached me with his script about the Holodomor, I was happy to become involved in the project.”

The historical aspects of the story resonated personally for Mendeluk. His Ukrainian mother survived the Stalinist starvation policy in the early 1930s before meeting her husband in Germany and fleeing with young George to Canada. Inspired by their experiences, Mendeluk, in collaboration with Hoover, re‑wrote Bitter Harvest, enhancing the narrative around a fictionalized romance between a young artist and his wife. “The story had a three‑act structure,” he says. “The main theme I developed further was the journey of a peasant boy, the metamorphosis of an artist who becomes a warrior.”

In the summer of 2013, Mendeluk approached production veteran Chad Barager to join the project as a producer. “He wanted a guy used to making quality films on a small budget,” says Barager, who was initially reluctant to tackle a shoot in Ukraine. “I had never been and I didn’t know much about it except that it was part of the former Soviet Union and the Chernobyl nuclear disaster took place there. But I was attracted to the story. As it turned out I fell in love with the country and eventually met my wife, a Ukrainian, in Kyiv.”