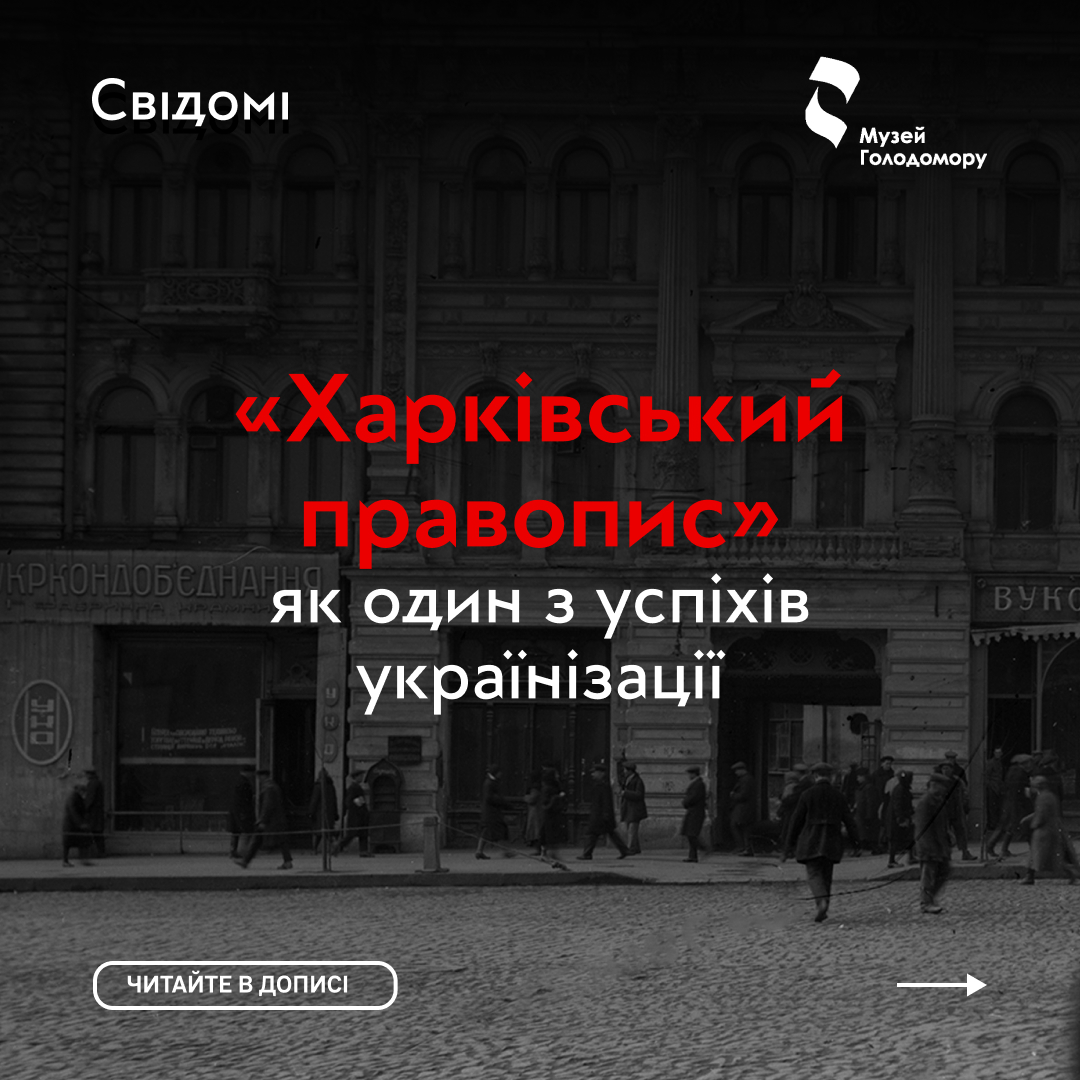 On September 4, 1928, the Council of People’s Commissars of the USSR approved a new Ukrainian spelling. “Svidomi_ua,” in cooperation with the Holodomor Museum, tells how the first academic all-Ukrainian spelling was created, which united the Galician and Dnieper written traditions, and about its ban.

The spelling is called “Kharkiv” because it was adopted by voting at the All-Ukrainian Spelling Conference, which took place in 1927 in Kharkiv. It is also called the “spelling of 1928” because the People’s Commissar for Education Mykola Skrypnyk approved it on September 6, 1928. Therefore, the spelling can be called “Skrypnyk’s spelling,” “Skrypnykivsky,” or “Skrypnykivka.” The main ideologue of spelling was linguist Hryhoriy Holoskevych, who, in 1929, published the Spelling Dictionary. That is why the document is sometimes called “Holoskevich’s spelling.”

Who created the spelling and how?

In 1927, Ukrainian linguists from different parts of Ukraine, then scattered in foreign countries, gathered in Kharkiv. It was necessary to develop common rules for the two main written traditions—Galician (Western Ukrainian) and Dnieper (Greater Ukrainian).

“The conference brought together about 75 Ukrainian scientists, writers, teachers, and other Ukrainian cultural figures from all over the USSR, as well as from abroad. Ukrainian Society named after Shevchenko in Lviv was delegated by two representatives, Academic Studynsky and professor Sventsytsky. The director of the Ukrainian Pedagogical Institute in Prague, a well-known linguist prof. Simovych, – Mykola Skrypnyk wrote in June 1927. — In any case, we must recognize that the conference had a real and full quorum. It was a kind of philological cathedral. “

On March 31, 1929, the Kharkiv Spelling was approved by the Ukrainian Academy of Sciences, and on May 29 of the same year, the Shevchenko Scientific Society in Lviv.

In 1929, the spelling was printed and distributed in schools, editorial offices, and publishing houses.

The life of the first Ukrainian orthography in Soviet Ukraine was short. In 1933, during the struggle against “Ukrainian bourgeois nationalism,” it was announced that the 1928 orthography was aimed at the alleged artificial separation of the Ukrainian language from Russian.

In 1933 the spelling commission headed by Andrii Khvylia changed the spelling. Its “nationalist” norms were revised and brought as close as possible to the Russian language (this process was continued in the spellings of 1945 and 1969). Most experts involved in creating the “Kharkiv spelling” were repressed and destroyed, or led to suicide. Hryhoriy Holoskevych was one of the first to fall into disfavour. He was arrested in August 1929 on charges of involvement in the Union for the Liberation of Ukraine (Holoskevych shortened his life in exile). Andrii Khvylia, the creator of the 1933 orthography, did not escape repression.

In fact, for the first time in Ukraine, including outside the UkrSSR, a list of rules appeared, combining different traditions. Spelling regulated the literary language, which for many years of prohibition was influenced by Polish, Russian and other languages; eliminated differences that arose under the influence of different dialects; standardized the spelling of foreign words and proper names. The spelling was as close as possible to the living vernacular.

“Spelling is important only when it allows every writer to easily express their thoughts in writing, without spending too much effort on the study of artificial grammatical rules, which means that the language spelling corresponds to its properties,” wrote Mykola Skrypnyk.

In the early 90s, there were proposals to restore some rules of “Kharkiv spelling.” At that time, only the “repressed” letter “Ґ,” which in 1933 was called “nationalist,” was returned to use.

More norms of the “Kharkiv orthography” were restored in the latest edition of the Ukrainian orthography in  2019.