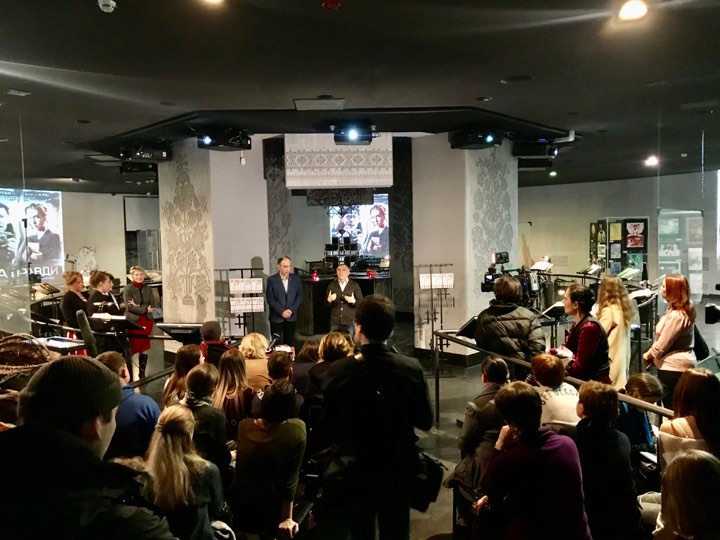 A New Book “Gareth Jones. The Price of Truth” Was Presented in the Holodomor Museum

On November 15, in the National Museum of the Holodomor-Genocide, a new book Gareth Jones. The Price of Truth was presented. The edition includes selected articles and a chronicle of the life of a British journalist who told the world the truth about the Holodomor.

The book was presented by Viktor Brekhunenko, director of the Holodomor Research Institute, Ihor Zhenchenko, director of the “Zhnets” Publishing House; Maryna Zhenchenko, publisher, associate professor of the Department of Publishing and Editing at the Institute of Journalism of the Taras Shevchenko National University of Kyiv; Yaroslava Prykhoda, Associate Professor of Publishing and Editing, Institute of Journalism, Taras Shevchenko National University of Kyiv, Polina Tolmachova, Marketing Director of “FILM.UA Group”, Alisa Kaliuzhna, promotional producer of the film “Mr. Jones”.

“We can study a lot of theoretical stories, but we must read Gareth Jones. The Price of Truth to feel the texts that show how to behave in very difficult situations,” Yaroslava Prykhoda said.

“In the fall of 1932, Gareth Jones warned of possible millions of victims due to the untwisting of the Holodomor flywheel. After visiting the villages of the Kharkiv region in March 1933, he wrote more than 20 articles about the horrors he saw. He specifically informed British politicians about the catastrophe in Ukraine with a demand to act. On March 29, 1933, he gave an interview to the New York Evening Journal and distributed a press release in Berlin, reprinted by many newspapers. “I went through many villages and twelve collective farms. Everywhere I heard crying: “We have no bread. We are dying, “Gareth Jones wrote, despite the Kremlin’s attempts to conceal the Holodomor,” Viktor Brekhunenko said.

“We don’t know much, but it was a time when not everyone had the courage to say that. Knowledge of the political situation, the ability to talk about this situation. He has an extremely good style, we need to study it, it is concise, and his texts are extraordinary,” Yaroslava Prykhoda emphasized.

“Gareth Jones’s articles had such a resonance that the Kremlin officially addressed a special note to London, and also tried to slander the journalist by controlled foreign correspondents. But Gareth Jones did not give up and responded to both Walter Durant and his fellow craftsmen who refused to trust his information about the Holodomor. Only German diplomat Otto Schiller, Cardinal Theodor Innitzer and journalists from the Lviv newspaper Dilo openly defended Jones. In the summer of 1935, Gareth Jones was killed during his stay in Inner Mongolia,” Viktor Brekhunenko said.

The book was published in two languages, Ukrainian and English, before the release of the historical thriller “Mr Jones”, which tells the story of journalist Gareth Jones and shows the most tragic events in Ukraine — the Soviet Holodomor genocide against the Ukrainian nation in 1932–1933.

The book is based on a bachelor’s project by Valentyna Pasichna and Olena Tyshchuk, students of the Institute of Journalism of Taras Shevchenko National University of Kyiv.

The historical thriller “Mr Jones” will be released in Ukraine on November 28, 2019.