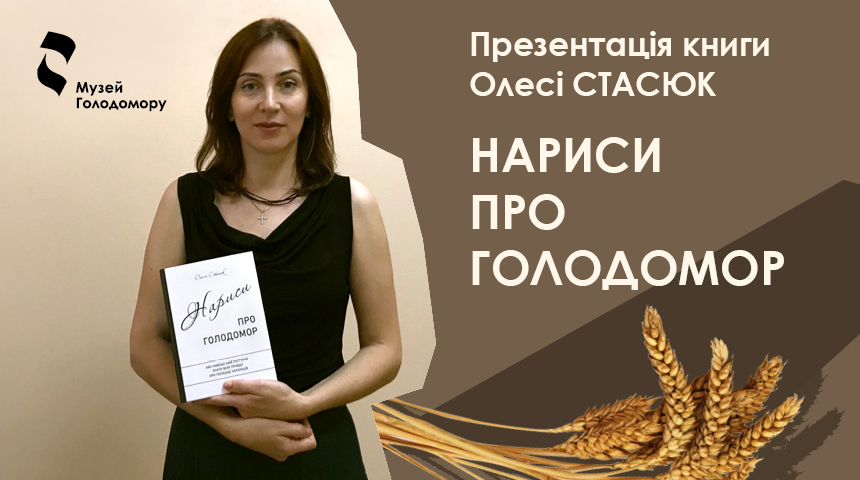 A New Olesia Stasiuk’s Book about the Holodomor Was Published

Why should Ukrainians today know about the Holodomor? Why should the countries of the world recognize the Holodomor as genocide? What made these events possible in the twentieth century? How exactly do they affect us now?

In the book Essays about the Holodomor, or Why We Need to Know the Whole Truth About the Genocide of Ukrainians, Olesia Stasiuk, Ph.D., researcher of the Holodomor genocide of 1932–1933 and director of the Holodomor Museum, answers questions and outlines ways to overcome the post-genocide syndrome on different levels — from individual perception to public policy.

As of today, the edition is available for sale.You can order it on the website: https://markobook.com/knigarnya/narysy/

We publish an excerpt from the book:

“The ‘experiment of Russification’ in its highest dimension, Sovietization, was necessary to create a new ‘Soviet nation’, for the existence of which the national unity of Ukrainians, their way of life, customs and thoughts about themselves as Ukrainians were a matter of survival and future, or as R. Lemkin noted, ‘posed a serious threat to the very essence of Sovietism.’

Therefore, the Stalinist regime launched a full-scale campaign of aggression aimed at destroying the foundation of Ukraine, and it is not only about the intelligentsia, Church or language separately, but also about the force that fed all this energy — the Ukrainian farmers.

When the Soviet authorities developed their criminal plan, the Ukrainian countryside stood firm. They did not dare to strike a direct blow and used a manouvre in order to psychophysically, socio-economically and morally weaken the Ukrainians.

In this regard, we should agree with D. Irwin-Erickson, who noted that the genocide was the killing of people in order to destroy the Ukrainian way of life.

Of course, the Holodomor genocide of 1932–1933 is just one episode in a much longer and more complex history of coercion, oppression and violence against Ukrainians by the communist regime. However, since it is the subject, I would like to begin by understanding the nature of this crime. For me, the Holodomor genocide of Ukrainians is a special intention and an organized (and planned according to this intention) set of actions by the communist authorities aimed at destroying the basic principles of Ukrainians as an ethnic group, people and nation, through ‘collectivization of life’ and organizinf the famine, which caused an irreparable deformation of the moral and psychological climate and the usual (traditional) way of life, suspending the processes of formation of civil society and following the European model of economic and political development in Ukraine for many years.”