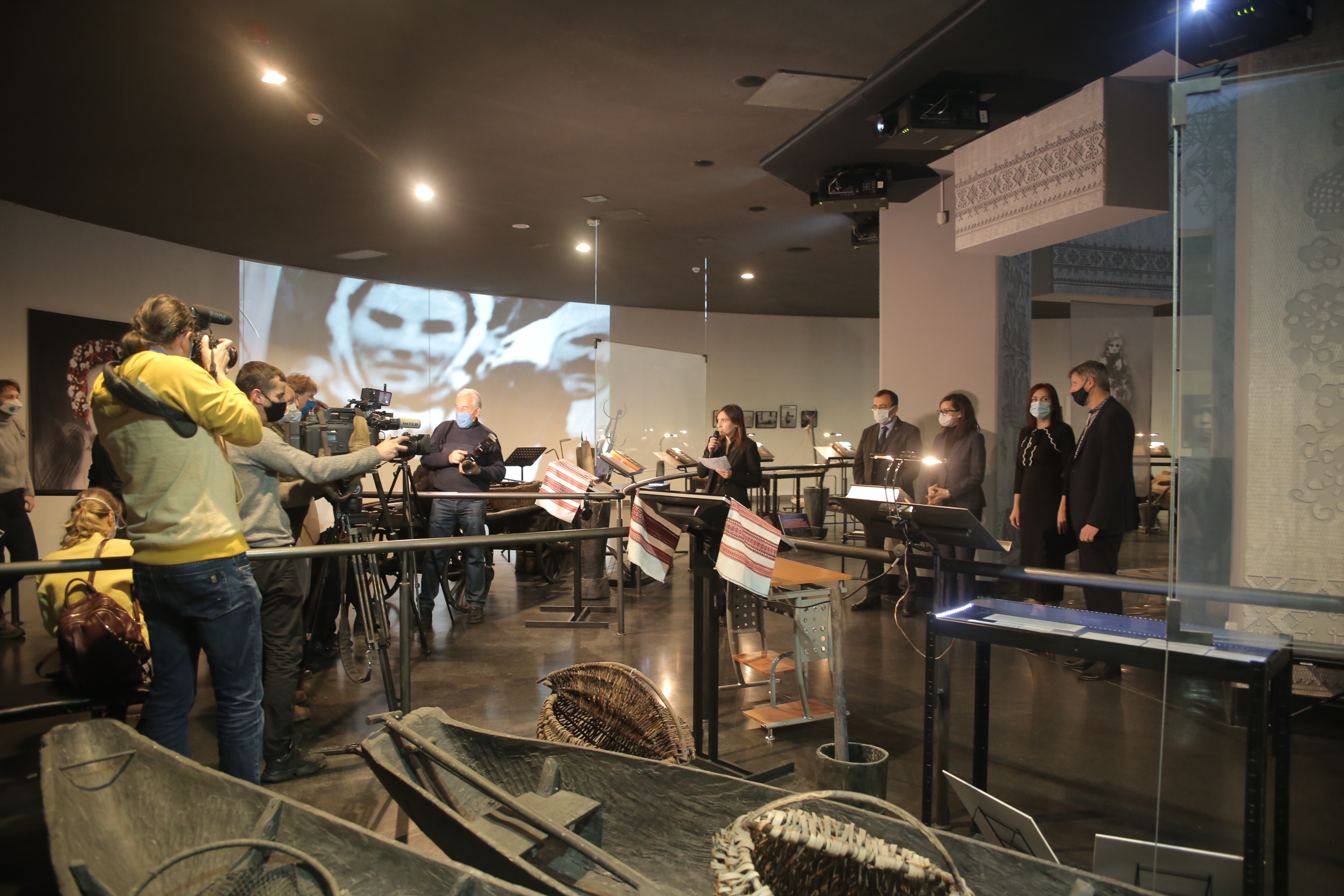 About the Holodomor in the Language of Art: Worldwide Known Exhibition “Mariia” by Lesia Marushchak is now in Kyiv

On November 20, 2020, Lesia Marushchak’s project “Maria” was presented at the Holodomor Museum in Kyiv. The exhibition will run from November 20, 2020 to March 31, 2021 with the support of the World Congress of Ukrainians.

This is the world’s most famous exhibition on the Holodomor genocide, which was presented in 9 countries and will now be exhibited in Ukraine for the first time. “MARIA” is a mobile memorial space that perpetuates the memory of the victims of the Holodomor of 1932–1933 and contributes to the dialogue on social justice and human rights. The center of the exhibition is an image of a girl named Maria, who survived despite the decision of dictator Stalin, unlike millions of victims of the Soviet genocide in Ukraine.

Olesia Stasiuk, Director General of the National Museum of the Holodomor Genocide said, “The Museum team has been working for more than a year to open the Lesia Marushchak’s “Maria” exhibition in our space. To ensure that no one human death in 1932–33 was in vain, we preserve the memory of those killed by the famine and, together with the rest of the world, honor the victims of the Holodomor every fourth Saturday in November. This year we will light candles in our windows on November 28. And on the eve of this date we open the exhibition “Maria” in the Museum.”

Serhii Kasianchuk, Director of the UWC Office in Ukraine, said “I would like to thank Lesia Marushchak for taking the Holodomor topic into her life. She felt pain and tragedy in her soul, in her heart, and transformed them into the installation. When art goes from the heart, it enters the heart.”

Larysa Galadza, Ambassador Extraordinary and Plenipotentiary of Canada to Ukraine, said, “It is a great honor for me to be here on the eve of the Holodomor Memorial Day to open the exhibition of Canadian artist Lesia Marushchak ‘Maria’. Art is an eloquent means of communication, a powerful healer, and in this case a painful and piercing witness. Lesia’s works traveled the world, and now they have come home. This exhibition is also a testament to the fact that we will never forget these horrors. The memory of the artificial famine was organized by the regime of the communist government in order to destroy the Ukrainians could not be erased. Millions of people around the world, and especially the strong Canadian diaspora, told the truth about the genocide.”

Vasyl Bodnar, Deputy Minister for Foreign Affairs of Ukraine, said “It is very important that this exhibition came to Ukraine, home. We need everyone to know what Ukrainians experienced at the time was an act of genocide. As long as memory lives on and as long as we demand that this memory be recognized by others, we will exist as an independent state with a place in the world.”

Yana Hrynko, curator of the exhibition, said, “It is amazing how Lesia Marushchak’s works attract attention. The works presented at the exhibition are the result of research on memories of the Holodomor that the artist heard in the Ukrainian community in Canada, testimonies given by Ukrainians during the US Holodomor Commission of 1932–33, photographs and memoirs of Alexander Wienerberger. The artistic techniques used by the author turned photographs of the Holodomor into art objects. The story of the girl Maria has become a space for reflection on the scale and depth of the damage caused by the totalitarian communist regime.”

The artist Lesia Marushchak took part in the presentation via video.

LESIA MARUSCHAK, the author of the exhibition “Maria”, was born in Canada, in Alvena. She grew up in the Ukrainian community of Canada, where she learned about the Holodomor from the stories of Ukrainians who survived the genocide. The Ukrainian diaspora in Canada is a large and strong community, which is the basis of strong ties and partnerships between Ukraine and Canada, including in the dissemination of knowledge about the Holodomor genocide.

Her works are based on historical studies of memory and identity and with the help of sensuality and visuality awaken deep emotional feelings. Institutions that have her works include the Metropolitan Museum of Art, the European House of Photography in Paris, the Boston Athenaeum, Stanford University, Columbia University, and the Library of Congress.

In September 2020, The Guardian published a photo of the project “Maria” in an article about the best pictures from the Landskrona festival. The book “Maria” based on the exhibition was shortlisted for the Book Prize at Rencontres d’Arles in France (2019) and received the award for best design at the International Book Arsenal Festival in Kyiv (2019).

The Holodomor Museum is the only museum in the world that tells about the genocide of Ukrainians. We teach to resist hatred and human rights violations, we warn society against the recurrence of the crime of genocide by accumulating and disseminating knowledge about the Holodomor.

To get more information about our projects and support them informationally, write to [email protected] or call +380674397507 (Olga Syrotiuk, communications manager of the museum).