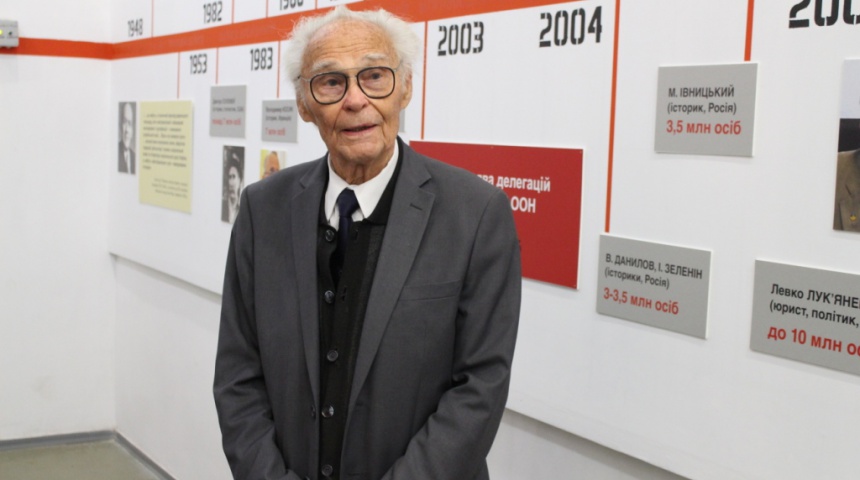 About the Holodomor with Tears in the Eyes

On September 26, 2019, an unusual visitor from Toronto, Canada, visited the Holodomor Museum. Mykola Latyshko is a member of the Union of Writers of Ukraine. He remembers very well the events of 1932–1933 in Ukraine and shared his memories with us.

Mykola Latyshko was born on December 19, 1927 in the village of Ivanivka, Holoprystanskyy district, Kherson region. Mr. Latyshko’s father was a teacher. When he saw that at the beginning of 1932, there were 400 children attending the school, and at the end of the year, there were 30, he went to the head of the village council to arrange hot breakfasts for the students. However, the conversation was not successful. The head of the village council, having heard from Mykola Latyshko that children are starving and have no strength to go to school, he shouted: “There is no famine in the Soviet Union! It is the guilt of national bourgeoisie.” And when his father went to the GPU and said that the head of the village council did not want to feed the children , who were the future members of the party, after 3 days the nourishment was organized immediately.

Mykola Latyshko also told how he and other villagers went to Torgzin to exchange things for food. People brought embroideries and household gold, and little Mykola brought the skins of ground squirrels. He and his sister used to hunt for rodents, ate the meat, and handed skins over.

With tears in his eyes, the guest told how he was forced to eat his friend – a little dog. “I used to go home after school, and ran immediately to the kennel, to my friend. And once there was no one there. Where’s the dog?” I asked. And the grandmother says, “Sit down and eat, your dog is in the bowl… ”

In 1933, there was no longer anyone to sow the fields, so families were brought from Russia and lodged in empty houses whose owners were either starved or evicted.

In 1935, Mykola Latyshko and his family moved to Sumy region to their relatives. He asked, “How did you survive the Holodomor?” His aunt replied, “We were going to Russia, buying 5 loaves there, and returning through the Bryansk forests. Then they allowed only 1 loaf to be carried through, and then completely closed the border. ”

In the autobiographical novel “Just Because,” Mykola Latyshko described the life of his family Latyshko and Nadtochii (his grandfather’s family) –  dekulakization ans exile, Holodomor, harassment and persecution.