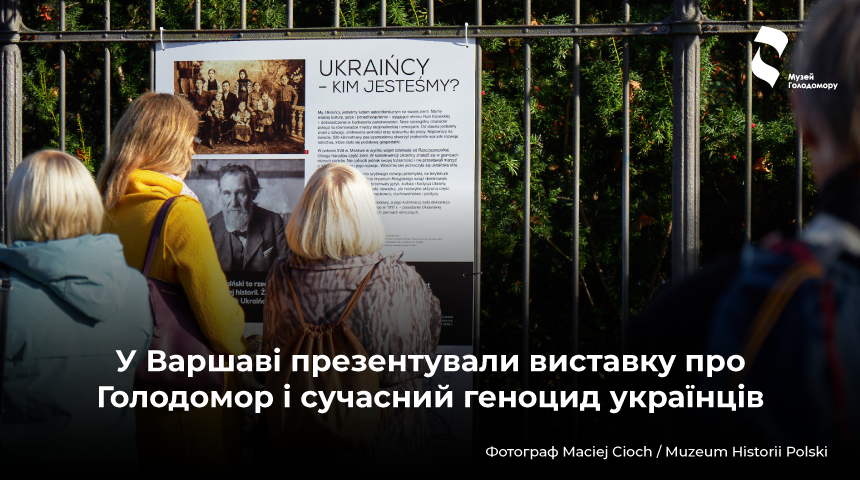 An exhibition about the Holodomor and the current genocide of Ukrainians was presented in Warsaw.

On November 3, the exhibition project “Holodomor and repeated genocide” was presented on the territory of the “Łazienki Królewskie” palace and park complex in Warsaw. The exposition on the history of the Holodomor of 1932-1933 and the genocidal policy of Moscow in the current war against Ukraine was the result of the cooperation of the Holodomor Museum and Polish partners: the Polish History Museum, the “Royal Baths” Museum and the Polish Institute in Kyiv.

The topic of the genocide of Ukrainians, organized and carried out by the communist totalitarian regime in the 20th century, is comprehensively revealed on 18 posters. It is also about why today Moscow repeats its crimes in the occupied Ukrainian territories. Throughout its existence, the USSR, in every possible way, hid and denied the Holodomor as a genocide of Ukrainians. The criminal regime was not condemned for the Holodomor, and this impunity gave birth to new crimes in the occupied territories. After all, Russia, like it was in 1932-1933, kills Ukrainians only because they are Ukrainians.

Each of the posters reveals important aspects of the Holodomor as a genocide of the Ukrainian nation in accordance with the UN Convention on the Prevention and Punishment of the Crime of Genocide. Particular attention is paid to the coverage of the current genocide of Ukrainians, as well as the repression of the communist totalitarian regime against ethnic Poles who lived in the UkrSSR in the 1930s.

On behalf of the Holodomor Museum, Maryna Pryn, the chief custodian of the funds, spoke at the presentation: “Irpin, Bucha, Borodianka, Mariupol… These are Ukrainian cities that witnessed a new genocide committed by the same enemy as 90 years ago. Moscow did not give up its efforts to destroy the independent Ukrainian state and its identity. They continue to kill and rob every day. Ukrainian grain is being stolen and exported again. This exhibition is an opportunity to tell society that unpunished crime always returns with new brutality.”

The Ambassador of Ukraine to the Republic of Poland, Vasyl Zvarych, also noted that Russia’s crimes should be punished: “We all remember that during the Soviet Union, this topic used to be a taboo and for everyone who spoke about this tragedy, about this genocide of the Ukrainian people, punishment awaited. And therefore, only in the early 1990s, millions of Ukrainians began to learn this history, this truth about the events of that time, and other countries of the world also started learning it for themselves. And now, we must especially draw the world’s attention to this tragedy, to this genocide, because, in fact, history is repeating itself: the methods that communist Russia used then, it is still using now, depriving the Ukrainian people of the most important means of livelihood, especially before the arrival of the winter period, when the entire energy infrastructure is destroyed, when they want to deprive people of heat, light, water and means of livelihood. It is also a sign of genocide, which Russia must eventually answer for before an international tribunal.”

Visitors will be able to familiarize themselves with the exhibition until the end of November in the open-air Gallery of the “Łazienki Królewskie” museum on the side of Uyazdovsky Alley.

It will be recalled that Poland at the state level recognized the Holodomor as an act of genocide in 2006.