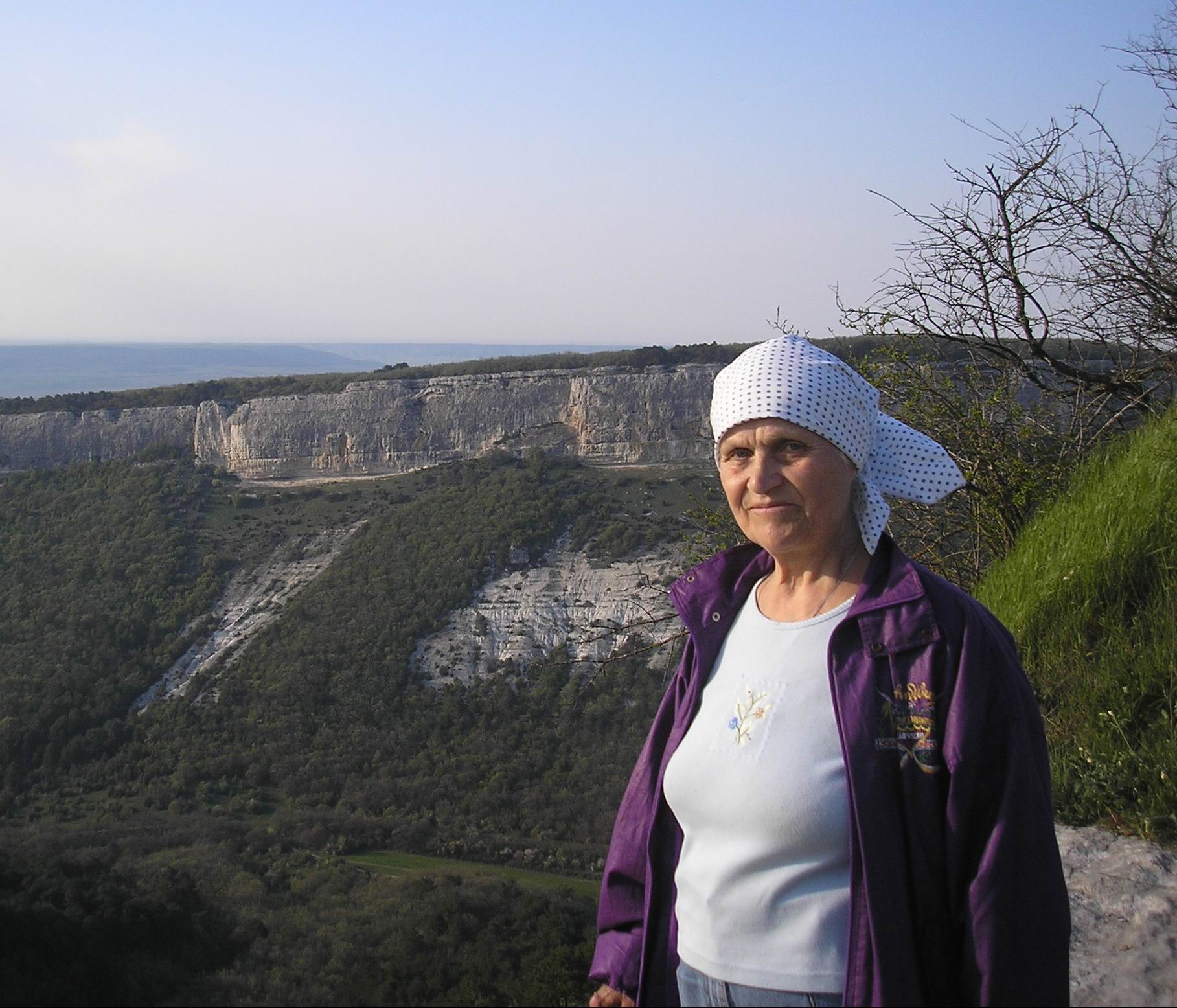 Ukrainian poet and public figure Antonina Lytvyn collected family stories about the events of the Holodomor genocide and mass artificial famines of 1921–1923 and 1946–1947. We publish fragments of the collected memories.

“Somehow we survived this, but in 1929 there was a complete collectivization, dekulakization. My grandparents had to flee the village so as not to be deported to Siberia. Everything that was so hard earned was taken away. Even clothes, household utensils, tubs, pots, shovels … And my grandfather and grandmother with two daughters (my mother and sister Anna) ended up in Nikopol. They became proletarians, went to the factory to work. They were also udarniks, because they used to work diligently and honestly. But 1933 came. They gave 100 g of bread a day on the ration stamps and three times some balanda in the dining room. My mother confessed to me shortly before her death about such a ‘sin’ of hers … She received her 100 g of bread and went to the canteen for a chat. And there sits her father and, looking beseechingly at her, asks: ‘Klavochka, if you’ve got bread, please give a piece of it for me…’. She wondered, ‘Did you, father, get your rations?’ ‘Yes, but I ate it… and I still want to, at least a little…’ The mother answered: ‘And I want too, father…’ And she passed by him. Soon my grandfather swelled up and died. My mother had been punishing herself as long as she lived for not sharing that crumbs. It is clear that she would not save her father from death with that piece. But what that disaster led to, it’s scary to imagine. That my kind, heartbroken, sensitive and generous mother did not share a piece of bread with her father! ”

“Vasyl’s father Stepan Lytvyn escaped from the collective farm serfdom and worked at the nearest railway station Pomichna (Kirovohrad Region, Dobrovelychkivskyi District). And they lived in the village of Pushchanyi Brid. His mother Lytven (Parkhomenko) Maria Onyskivna (1910–1975) was in the village with her mother-in-law and first-born Ivan, she worked on a collective farm. They did not receive anything. They decided to escape, went to work, too, at the train station. A week passed while she was getting a job. Then she rushed home, and her my mother-in-law was swollen, her son was barely alive… But there was already some income and an opportunity to escape from hunger.

And grandfather Onysko himself did not escape, and not all children were saved. He was at war (World War I), was in captivity, saw many deaths, and died of starvation at home, because his farm was dekulakized, leaving nothing but the garden. And out of nine children only the eldest got married, and all of them are hungry. The first to die was Nina (17 years old), who was taken to the cemetery by horse. They buried her, and here the “dekulakizers” came and took the horse away. The carts were hauled home by themselves. Onysko couldn’t stand it, he died, he couldn’t even be taken to the cemetery, he was buried near the house. Then another son, Sydir, passed away. Others somehow managed to survive. “

“I remember 1947 myself. Cannibalism did not happen again. But hungry, swollen children also writhed in agony …

It happened that my grandfather could not walk, and my father was taken for a ‘state inspection’. Everyone who was in the occupied territories was taken to forced labor or to penal companies. It did not matter that the father was a partisan, that he saved the cattle of the whole area from being taken to Germany. He served four years of hard labor, from which several fellow villagers did not return. Moscow was rebuilt, although it did not suffer as much as Kyiv.

Our mother worked on a collective farm, she had three children, and a grandparent. The mother would go to work, the grandmother would bake a pastry for her, ands since there was not enough flour, she would give half a liter of milk, because the cow went under the yoke and gave very little milk, she sends her to work, saying: ‘It the children die, you will have another. And there will be no second mother…’

My mother cries and goes to work. Our grandmother gives us some dough, and that’s how we ate. Even now I cry, as I recallr: my mother comes home from work in the evening, barely puts her feet up, and calls us to a corner and hands out the cake that her grandmother gave her. It is broken a bit… She watches us pass, and swallows saliva… Sometimes she brought some old cake from a familiar grandmother. At that time, uncle Yakiv returned from German captivity, he was also sent to the Japanese war. And there is nothing at home. Uncle Jacob asks his mother, ‘Klava, let me share the cake with the children.’ He takes that cake, carefully breaks it into pieces with a knife, gives it to us. And he licks what is left on his palm.

And another case: they gave my mother some aid from the collective farm, a few kilograms of oats. We pounded it in a mortar and made jelly. We were so full! And my brother ate many thorns from hunger and did not spit them out. He had such cramps! I’m still scared to remember how he cried and shouted, ‘My stomach hurts! Oh, it hurts a lot.’

And my husband said the following about 1947: spring, people are sowing peas. He and his younger brother Mykola hid in the bushes. As soon as the seeder has passed, disappeared into the distance, they jumped out of the bushes and, like chickens, were raking the rows, looking for peas and immediately swallowing them. And although they were small (six and four years old), they knew that they had to hide, because their parents would go in prison. As soon as the seeder appeared in the distance, they quickly climbed into the bushes so as not to be recognized.

Another memory. In the kolkhoz barn, women ground corn with hand millstones. Vasyl is carefully looking: as soon as the grain jumps out, he puts it in his mouth. One of the women saw, looked around to see if anyone was there, hastily picked up a handful of corn and poured it into the hem of her shirt. The boy smiled, hugged his fortune and ran home: his younger brother and older sister were at home. He carried them and swallowed them one by one. He came home, but the hem was empty: he didn’t remember how he ate everything. He went into the house, and his sister was chatting: “Vasyl, I left you some potatoes …” She took some frozen small potatoes from the garden, boiled them in the iron pan and honestly divided them into all three. ‘I don’t want to…’ he replied, hiding his eyes. Word for word, the sister asked about everything and embarrassed Vasyl. He remembered his guilt for a long time: he ate and did not share…

Or like this: there are ears of corn left here and there in the field. Vasyl and his brother Mykola came to see. The grain remained above the road. Children, like birds, started to pick them. This is where the ‘patroller’, as people called this position, the caretaker of the collective farm, came. The children ran away, their little hearts jumped out of their chests. And not to their house, because this was how they know whose there children were and sent their parents to prison. They were almost caught up! But there was a pit nearby. They jumped there without hesitation. Depth was one and a half to two meters. Vasil told, ‘We lie in that crack and cry our eyes out,” and there is a red furious face over us — whose are you?! Curse words, threats, and he can’t get us, the pit is narrow. And he left… And we shouted for a long time. And when we got out of there somehow, we didn’t rush home, because maybe he’s watching, one can’t let your parents down, we went through the gardens, all the way to the pasture, where a group of children was at the other end of the village, so they didn’t recognize us. “

Another image: in the dark of night they went to gather ears of wheat in a mown field. The field was already plowed, but from the other end there was still stubble. So, there was a probability of finding a grain. The whole family came: mother, older brother Ivan, sister Olia, Vasyl and little Mykola. My father has not yet returned from work from the station. We were listening carefully and collected the grain. Everyone has a bag on their shoulders. It was then that we heard the horse croak. Rider! Quietly, like shadows, we rushed away. We ran home, our father had already returned from work. Where have you beenn? We told about everything. ‘And where is Kolia?’. He was absent… “Well, you go wherever you want—you dared to lose a child!” the father said. And we went to the field again, looking, quietly calling. We were lucky: Ivan caught his foot on the baby. He slept peacefully, putting the bag under his head. Ivan took him in his arms, so sleepy and brought him home. And when we looked into his bag, we saw two empty ears of grain. ”