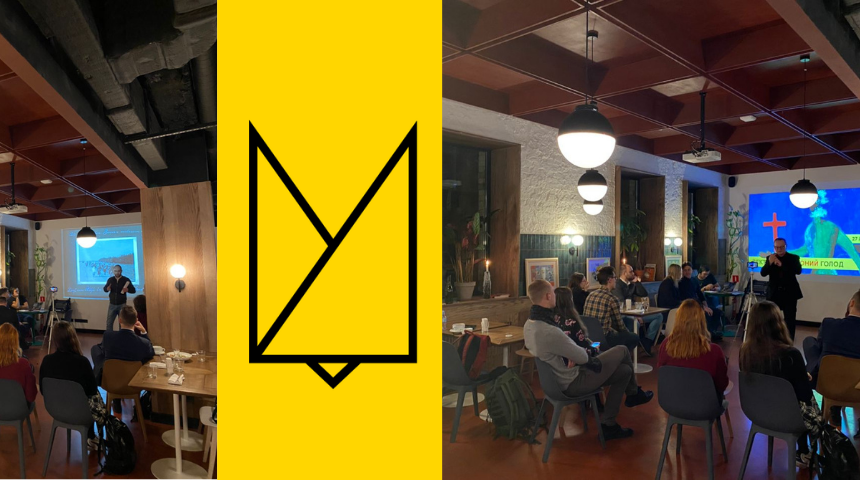 In November, the Ukrainian Students for Freedom NGO held an educational event dedicated to the history of the Holodomor on Holodomor Remembrance Day. Attendees learned about the life of Kyiv in the 1930s, the historical heritage and how the past affects the thinking and worldview of generations. We are always open to initiatives and research, cooperation and joint projects.

Dmytro Bilyi, leading researcher at the Holodomor Research Institute, Doctor of History, Professor, spoke about the Holodomor, its preconditions, mechanisms and consequences.
Ivan Petrenko, PhD in History, employee of the Holodomor Museum, presented the mobile application “Track Holodomor History” and shared the results of research on the history of the Holodomor in Kyiv.
The speakers were also:
Yegor Shapovalov—”Economics of the Holodomor”;
Marianna Makarchuk—”The Legacy of the Holodomor: How Society Remembers”.
The event was held offline and online.

We publish abstracts of reports of our experts:
Dmytro Bilyi, leading researcher at the Holodomor Research Institute, Doctor of History, “Despite the defeat of the national liberation struggle in the early 1920s, strong national and cultural development continued under occupation. Ukrainians were able to achieve broad autonomy, to resist the Russification policy of the Moscow authorities. In the late 1920s, the Moscow leadership, which embodied Stalin’s dictatorial regime, realized that the national movement in the USSR was about to gain enough strength to break out of Kremlin control. Then the undeclared war against the Ukrainian nation, the most brutal in the history of Ukraine, began.
Stalin, who was afraid of Ukraine and the Ukrainians, set himself the task of destroying the Ukrainian nation and turning Ukrainians into obedient slaves of the Soviet system. The peak of the war against the Ukrainians was the Holodomor of 1932–1933. It was combined with a whole set of repressive measures—the destruction of the best representatives of the Ukrainian intelligentsia, the Ukrainian church, Ukrainian culture and the social base of the Ukrainian nation—the Ukrainian farmers. In fact, all this corresponds with the UN International Convention on Genocide. Everything that happened in 1932–1933 was genocide. The Ukrainian nation has suffered enormous losses. The consequences of the genocide, when millions of Ukrainians were killed, will resonate in Ukraine’s development for a long time to come. However, the fact that Ukraine is now a free and independent state, and the USSR no longer exists, testifies to our victory in this war. We must honor those who died during the Holodomor, but we have no right to consider ourselves victims and incur a complex of eternal defeat. And this will be the best condition for such events to never happen again. We have won and we will win!”

Ivan Petrenko, PhD in History, employee of the Holodomor Museum, a member of the team that created the mobile application “Track Holodomor History”, “Unfortunately, until recently the problem of survival of Kyiv and large industrial centers of the USSR during the Holodomor was hardly studied. To some extent, this theme was a kind of terra incognita. The long work of the Holodomor Museum team on the creation of the mobile application ‘Track Holodomor History’, the study of memories and archival documents gave us the opportunity to immerse ourselves in the life of Kiev during the genocide of 1932–1933. From the facts and materials presented in the application, it becomes clear that Stalin’s terror by famine was aimed not only at killing self-sufficient and hard-working Ukrainian farmers, but also had a larger goal—the destruction of the Ukrainian nation as such.”