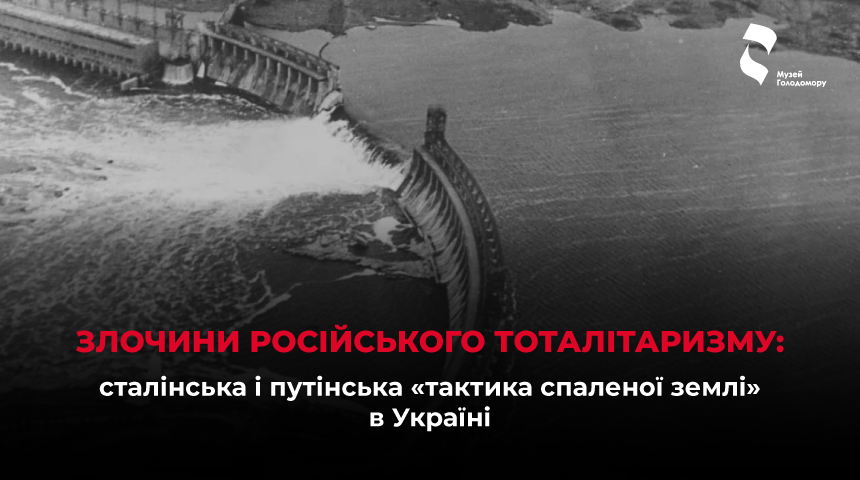 The Russian dictator Vladimir Putin is playing out the war in Ukraine according to Stalin’s rules and may blow up the Kakhovka HPP, as Stalin blew up the Dnipro HPP, which was the most powerful hydroelectric plant in the USSR, 82 years ago. In a recent televised address, Volodymyr Zelensky said that Russian forces had planted explosives inside the enormous Nova Kakhovka dam, which holds back the giant reservoir, and were planning to blow it up. Russia accused Kyiv of missile strikes on the dam and planned to destroy it. Ukrainian officials called this a sign that Moscow could undermine it and blame Kyiv for that. Volodymyr Zelensky called on the West to warn Russia against blowing up the Kakhovska dam, which could cause flooding of a large area of southern Ukraine.

The Stalinist crime was committed on August 18, 1941, at 8:00 p.m. to stop the advance of German troops — to make it impossible for them to cross the Dnipro and to paralyze the work of the largest hydroelectric power plant before the invaders entered Zaporizhzhia. On August 13, the engineering department of the Southern Front received a cypher message from Joseph Stalin and Borys Shaposhnikov, the Chief of the Red Army General Staff: “In case of extreme necessity, allow destruction.” Three days before the event, the engineer colonel of the Red Army, Borys Epov, who led this operation, arrived in the city. Under instructions from above, he ordered an NKVD engineer battalion to plant approximately 20 tons of explosives on the dam and blow it up and the railroad bridge across the river. Oleksiy Petrovsky, the head of the military engineering department of the headquarters of the Southern Front, carried out this criminal order.

The specific cynicism of the incident consisted of the spontaneity of its implementation and ignoring the need to inform residents about it. Moreover, even the party leadership of the city and even its military units, which arrived under pressure from the front, were not informed of Stalin’s intentions. “We were in Zaporizhzhia, when suddenly the ground shook under our feet, the air shuddered from an explosion of enormous force,” the commander of the Southern Front, Ivan Tiuleniev, remembered.

Due to the massive wave that formed after the explosion and the flood, which lasted for 2-3 days, many Red Army soldiers who were crossing to the left bank of the Dnipro at that time, as well as residents of the Dnipro villages and towns that were flooded in a few hours, died. As the residents of Zaporizhzhia, who lived along the Mokra Moskovka river, which flows into the Dnipro from the left bank, recall that after the explosion, the water did not flow into the Dnipro channel, but in the other direction. We will never know the exact number of victims because, at that time, no one counted the number of victims. According to contemporaries, from three to 100 thousand people died as a result of the destruction of the dam. Data on several thousand victims are considered more likely.

Fragmentary memories of the tragedy are preserved. A woman who lived not far from Dniprovsky Plavni recalled that the residents of this area “heard terrible screams and wails. Then everyone got boats, and almost everyone had boats there, and started rescuing the soldiers who were clinging to the tops of the trees. Many people were saved.” In this area (15 km from the dam down the Dnipro) the force of the water was almost not felt anymore because of the huge number of different lakes and small rivers, and islets that existed in this low-lying part before the constructing the Kakhovsky reservoir, took over the flood, which was formed due to undermining the dam. As it usually happened during the melting of snow in the spring.

It is a certain irony of fate that this explosion did not hinder the German troops and did not cause them any significant losses. In fact, it was not the Germans but the Soviet crossings demolished. The German military observed the consequences of the explosion through binoculars. However, the dam destruction made it difficult for the Wehrmacht to advance further in the Zaporizhzhia region.

For some time, they concealed information about the circumstances of the dam’s destruction. Even they spread false rumours about sabotage and the Wehrmacht’s responsibility for what had happened. However, later it became known who were the real executors of the DniproHPP explosion. Borys Epov and Oleksiy Petrovskyi were arrested by the counter-intelligence as saboteurs. However, after the military leadership intervention, they were released because Stalin had given the order to blow up the dam personally.

The undermining of the DniproHPP was not just the liquidation of an industrial facility but also the destruction of the major electricity supplier to the regional centre. However, after the power plant was blown up, the dam was rebuilt by the Germans less than two months later, and the power plant was operational a year later. In 1943, when the German troops were retreating, they blew up the power plant again, but only its technical part. The dam was not destroyed. Later, at the Nuremberg trials, the Soviet side tried to insidiously shift the blame for undermining the dam to the Germans, but no convincing evidence was provided.

The destruction of the DniproHPP in the summer of 1941 is one of the most tragic incidents of the “scorched earth” policy, carried out during the retreat of the Red Army to the East. The number of tragedy victims is impressive, as well as the scale of the campaign to destroy everything of value in cities and villages without the slightest need to worry about the fate of the civilian population, which was left without food supplies (fields with crops were also burned) and with destroyed infrastructure before the approach of the cold season.

The National Museum of the Holodomor-genocide