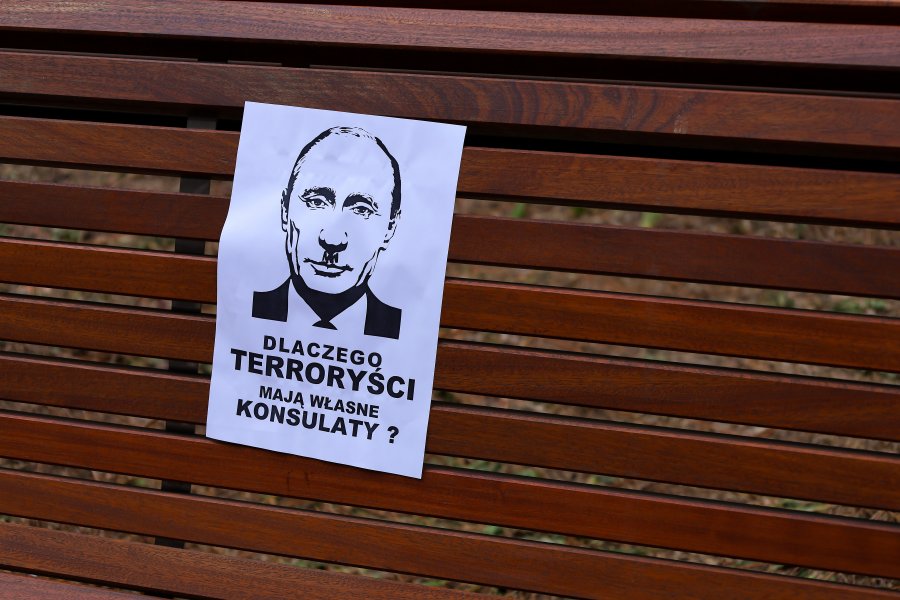 “Denazification” as a justification for genocide

Since February 2014, Russia has been waging unprovoked criminal war against Ukraine, which undermines the international legal order and the system of nuclear non-proliferation and violates the obligations of the Russian side under multilateral and Russian-Ukrainian treaties. Even then, statements from the Kremlin that either “fascists” or “Nazis” had seized power in Kyiv were heard. By its nature, this undeclared war is aggressive, revanchist and genocidal towards the Ukrainian nation. It became especially evident during the stage of large-scale armed aggression that the aggressor state launched on February 24, 2022. However, the Putin regime probably hatched genocidal intentions against Ukrainians long before 2014. From the very beginning of the war, the Kremlin sought either to destroy Ukrainian statehood or, at least, to fragment Ukraine: to divide it into several administrative and territorial entities without true sovereignty, which should lead to the destruction of the Ukrainian political nation and create conditions for at least partial assimilation of the Ukrainian ethnic nation, and at the same time promoted ideologues such as “the three-united Russian people” and “Russians and Ukrainians are one nation”, which denied the sovereign rights and subjectivity of the Ukrainian people in general, both in the sphere of state-building and culture.

On February 24, 2022, the President of the Russian Federation, Vladimir Putin, announced the beginning of the so-called “special military operation” (in fact, a new large-scale stage of the war). He called his goals “denazification” and “demilitarization” of Ukraine, declaring that “neo-Nazis” and “anti-people junta” took power in our country. In the following months, representatives of the Russian ruling clique and clerks in the state apparatus and propaganda servants from the media forces, which most of the Russian mass media have turned into, repeated the thesis about the need for the “denazification” of Ukraine in different ways.
The striking absurdity of the claims about the “Ukrainian Nazi regime” is evident to any impartial observer: over the past two decades, despite difficulties, Ukraine has been moving towards the gradual establishment of liberal democracy, while the Russian ruling regime has gone from unconsolidated authoritarianism to consolidated, and is now turning into a neo-totalitarian one before our eyes.

Propaganda of the absurd ideology about the “denazification” of Ukraine has already led the Russians to diplomatic scandals. Our state is in one of the last places in Europe in terms of the number of anti-Semitic incidents and the level of anti-Semitism. And the fact that the Ukrainian people democratically elected a compatriot of Jewish origin as president fatally destroys the plausibility of the myth imposed by the Russians about the seizure of power in Ukraine by the Nazis. In this context, it is interesting to recall that 2019 was time when our country was the only one in the world, apart from Israel, where both the president and the prime minister were ethnically Jewish. Under these circumstances, the Minister of Foreign Affairs of the Russian Federation, Sergei Lavrov, tried to justify Russian aggression and the genocide of the Ukrainian people, as well as “fix” such an uncomfortable Ukrainian reality with ideological manipulations, because of which he got into a high-profile diplomatic scandal, which led to a more precise definition by Israel of its position in the Russian- the Ukrainian war. In the spring of 2022, when asked by an Italian TV journalist how Ukraine could be accused of “Nazification” if its president, Volodymyr Zelensky, is a Jew, Lavrov said that Adolf Hitler also had “Jewish blood” and – moreover – “the biggest anti-Semites, usually Jews.” Such blasphemous statements provoked a barrage of righteous criticism from Israeli officials and the Jewish public of the world. In particular, the American Jewish Committee emphasized: “We have repeatedly spoken about the need for denazification – in Moscow, not in Kyiv.” Putin had to apologize for Lavrov’s unkind words to stop the further deterioration of Russian-Israeli relations.

The Russian neo-totalitarian regime is essentially fascist (Nazism can be considered an extreme form of fascism). Although it relies heavily on the symbolic legacy and practice of communist totalitarianism, and also tries to hide in a quasi-democratic shell. Representatives of the world’s intellectual elite have already proven the fascist essence of the modern government system many times, often relying on the criteria of the philosopher Umberto Eco or Laurence Britt.Briefly note that classifying modern Russia as a fascist or para-fascist state type allows the cult of the leader, despotism of power, almost one-party regime, militarism, imperialism, mobilization of the masses to fight enemies (often invented); a constant search for the latter, aggressive nationalism and great power, xenophobic attitude to many peoples, anti-liberalism, megalomania, etc. It is not a coincidence that the term “racism” spread in the Ukrainian information space regarding the essence of the Russian regime and the direction of its ideology. It combines the two words “Russian” and “fascism”. Many people can not recognise the essence of the Russian regime due to the use of the terms “fascists”, “Nazis”, and “neo-Nazis” by Russian politicians and propaganda to brand their opponents and enemies both inside Russia and in the external arena. In the absolute majority of cases, this declarative anti-fascism is a double simulacrum: first, the latest Russian fascists used it, and secondly, branded ones, as a rule, have no relation to real fascism. In this regard, the Russian and American political scientist Mikhail Epshtein, observing the beginning of Russia’s attack on Ukraine, proposed the term “schizofascism” in 2014.According to his definition, “schizofascism is fascismhat is hiding under the mask of fighting against fascism”. Actually, fascism, the scientist believes, is a holistic worldview that combines the theory of ethnic or racial superiority, imperialism, nationalism, xenophobia, great power, anti-capitalism, anti-democracy, anti-liberalism. Schizofascism is a split worldview, a kind of caricature of fascism, but a serious, dangerous, aggressive caricature.According to M. Epstein, schizofascism manifests itself in hysterical hatred of freedom, democracy, everything foreign, and people of a different identity, and the search for enemies and traitors among one’s people. But this chauvinist worldview is in a schizophrenic split with the desire to use the same benefits that the “enemy” provides: real estate abroad, the privilege of educating children in “Gayrope” and “Pindostan”, keeping accounts in their banks, etc.

For Ukrainians and most of the civilized world, the fallacy of Russia’s calls to “denazify” Ukraine was clear from the very beginning. It is interesting that in the spring of 2022, as sociological polls of Russians showed, this slogan was also incomprehensible to the majority of the Russian public, even though it had been pumped up with false ideologues about rampant “Nazism” in Ukraine for years. Russian propaganda tried to find a replacement for the term “denazification”, but it did not succeed, and continues to use it. In its turn caused indignation and demarche of civilized countries and organizations in July. Then the US, EU, Great Britain and 44 other countries condemned Russia “for once again abusing its seat on the UN Security Council to spread disinformation.” “We reject Russia’s ongoing attempts to distort history for its political purposes and promote extremely harmful false narratives and misinformation about neighbouring countries, including labelling others as ‘neo-fascists’ and ‘neo-Nazis’ without any basis.” The issues of the growth of global neo-Nazism and anti-Semitism deserve meaningful and constructive discussion. We regret that this was not the intention of Russia today, and it has held such meetings on the same topic many times,” said a joint statement made on July 12 following the results of an informal Arria meeting convened by the Permanent Mission of Russia to the UN.

Meanwhile, Russia continues its aggressive war against Ukraine, including the genocide of the Ukrainian nation. Article II of the Convention on the Prevention and Punishment of the Crime of Genocide defines genocide as an attempt to commit acts “with the intent to destroy, in whole or in part, a national, ethnic, racial or religious group,” and Article III condemns calls for “direct and public incitement to genocide”.The President of Russia and Commander-in-Chief, Putin, made it clear in his repeated statements that, in his opinion, Ukraine has no right to exist as an independent state, and Ukrainians are allegedly not a full-fledged nation with state and cultural sovereignty. Particularly, in July 2013, he published a letter promoting the thesis that Russians and Ukrainians are supposed “one nation.” The Russian military had to study this document as well. They discussed the intentions to destroy the Ukrainian nation in whole or in part even more openly in Russian propagandists’ texts or statements made in the state of Russian mass media. According to lawyers, Russian officials use “inhuman language” to describe Ukrainians and portray Ukraine as a “Nazi state” and “an existential threat to Russia.”

Russia carries out a systematic and consistent policy aimed at mass destruction of the population of Ukraine, violation of its sovereignty and territorial integrity, liquidation of the national statehood of Ukraine, and destruction of the Ukrainian people as separate national integrity. Its consequence was, first of all, mass atrocities committed by the Russian army in the temporarily occupied territories of Ukraine (symbolized by the events in Bucha, Irpin and Mariupol); systematic cases of deliberate killing of the civilian population and creation of conditions that cause exceptional suffering to the Ukrainian people; forced mass deportations of Ukrainian children to the territory of the Russian Federation and transferring them to be raised in a foreign environment to destroy their self-identification as Ukrainians; mass deportations of the Ukrainian civilian population to Russia; systematic actions of the aggressor state to create conditions calculated for the gradual destruction of the Ukrainian people through the undermining of economic potential and security.

Russia will not be able to cover these large-scale crimes against the Ukrainian nation with the “fig leaves” of false ideologues about the “need to de-Nazify” Ukraine. On the contrary, their use during the consideration of lawsuits against Russia in international courts and at the future tribunal for its crime of aggression against Ukraine may become additional evidence of the aggressor state’s violation of Article III of the Genocide Convention.