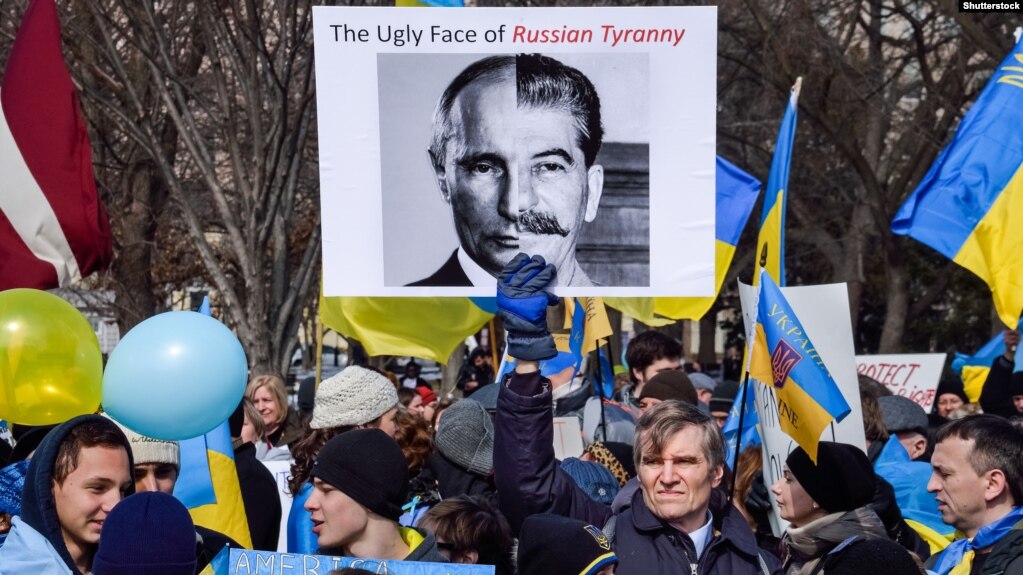 Today’s Putin’s Russia is a vivid illustration of the fact that unpunished evil tends to recur. During the seventy years of its existence, the communist totalitarian regime has committed crimes unprecedented in its scale.

There is no doubt that the USSR was the main criminal in world history in terms of the number of victims. Among the crimes of the communist regime: the Holodomor of 1932-1933, the mass man-made famines of 1921-1923, 1946-1947, mass repression and deportation, a huge numerous concentration camps, and more.

In the twentieth century, Ukraine suffered from the communist totalitarian regime the most. Today, the Putin regime is trying to destroy us and Ukraine once again

Stalin’s hatred and atrocities against Ukraine, which have not been punished, are now radiating from the Russian Putin regime.

The Great Leader is the killer of millions

More than half (53%) of the citizens of the Russian Federation consider the organizer of the Holodomor-genocide Stalin, who starved millions of Ukrainians, to be a “great leader” (opinion poll, May 2021).

In September 2017, a monument to Stalin appeared in the center of Moscow on the Alley of Rulers, opened at the initiative of the Russian Military Historical Society.

During the first half of the twentieth century, the communist regime inflicted incredible human losses on the Ukrainian people. Occupation of Ukraine, “establishment” of the Bolshevik regime in 1918-1920; the red terror of the period of “military communism” took the lives of about 1 million Ukrainians. Another 3.5 million Ukrainians fell victim to the mass man-made famine of 1921-1923, committed by the Bolsheviks led by Lenin (according to comprehensive forensic examinations of criminal proceedings for the Holodomor-genocide of the Security Service of Ukraine in 2019-2021)

In 1932–1933, the communist totalitarian regime committed the crime of genocide in Ukraine, which aimed at destroying the Ukrainian nation as a whole, which, in turn, was to eliminate the potential for Ukraine to secede from the USSR.

The purpose of the Holodomor genocide was to eliminate the national liberation movement of Ukrainians and prevent the restoration of the Ukrainian state.

The preconditions for the genocide of Ukrainians began in the late 1920s. On the eve of the Holodomor genocide, the Bolsheviks launched a broad campaign of repression against the Ukrainian intelligentsia and the national Church.

A significant precondition for the genocide was the destruction of the traditional social structure of Ukrainian society, which occurred during collectivization through “dekulakization,” mass deportations, and expropriation of private means of production. During the Holodomor Genocide, the communist regime exterminated millions of Ukrainians in Ukraine and Ukrainian ethnic lands.

The extermination of the Ukrainian intelligentsia continued during the “Great Terror” and other repressive campaigns of the 1930s, which killed about 300,000 people (a total of 651,123 people fell victim to political repression in Ukraine in 1929-1939). In the autumn of 1939, repression extended to the western Ukrainian lands occupied by the Red Army during the implementation of the Molotov-Ribbentrop Pact.

During 1939-1941, tens of thousands of residents of these lands were deported to concentration camps and settlements in remote areas of the USSR, and thousands were imprisoned and shot.

In May 1944, the communist totalitarian regime deported Crimean Tatars (Crimeans) from the Crimea to Central Asia and Siberia. It is another genocide committed by the Kremlin on Ukrainian land (the forced resettlement of Crimean Tatars was recognized by the Verkhovna Rada of Ukraine as an act of genocide on November 12, 2015). In two weeks, more than 193,000 people were relocated from the Crimean peninsula, who were declared special settlers (evicted for life). Another 13.2 thousand fairs were additionally deported in 1945-1946. The sharp deterioration of living conditions at the new place of resettlement led to a significant reduction in the number of Crimean Tatar people.

After the end of the Second World War, instead of the post-war restoration, the communist regime organized another mass man-made famine in Ukraine in 1946-1947, which killed at least 1.5 million people.

Extermination of opponents of the regime

Ukrainians suffered heavy casualties during the national liberation struggle in the second half of the 1940s and early 1950s against the OUN and UPA occupation regimes. According to official data, during 1944–1952, the NKVD-MGB punitive detachments killed more than 153,000 people and expelled more than 203,000 outside Ukraine. In the same years, about 500,000 residents of Western Ukraine were repressed.

Thus, in the first half of the twentieth century alone, the Moscow communist totalitarian regime exterminated more than 17 million Ukrainians.

At the same time, the given figures are obviously incomplete. Seeking refuge from the Kremlin’s criminal policies, many Ukrainians were forced to leave their native lands during the Soviet era, many of whom died outside Ukraine, so information about their deaths was not properly recorded.

Putin is a follower of Stalin

As the successor to the Soviet Union, the Russian Federation has not only not repented of crimes committed by the Kremlin’s communist regime in Ukraine, but the Putin regime has fostered anti-Ukrainian and xenophobic sentiments, which intensified in 2014 after Russia’s aggression against Ukraine.

In his speeches, Putin allowed himself to deny Ukraine’s right to an independent state and Ukrainians the right to be called a separate nation. In February 2022, 90 years after the Holodomor-genocide of Ukrainians, Putin’s Russian regime demanded “denazification” and launched a large-scale invasion of Ukraine.

The Russian army is ruthlessly killing Ukrainian women and children, destroying schools and hospitals, civilian infrastructure. Regretfully, unpunished crimes on time provoke a repeat of them in the future!

The scale of this aggression is unprecedented – our country has not known such destruction and human losses since the end of World War II. The barbaric shelling of Mariupol, Kharkiv, Volnovakha, Bucha, Hostomel, Irpen, and dozens of other Ukrainian cities led to a real humanitarian catastrophe. For these crimes against humanity and war crimes, the International Tribunal is waiting for the Russian leadership and Putin personally.

The main reason that led to the current situation was the lack of adequate assessment of the communist regime and ideology, both in Russia and in the world as a whole. After the collapse of the Soviet Union, the civilized world did not oppress Russia in the 1990s and did not force it to undergo a process of cleansing from criminal ideology; it did not force the Russians to condemn all the crimes of the communist regime committed in 1917-1991, including in Ukraine. In turn, this led to a symbolic and now a political restoration of the totalitarian regime in Russia.

Russia’s unprovoked aggression against Ukraine, large-scale war crimes committed by the Russian occupiers, and crimes against humanity have already caused international isolation of the Putin regime. No one in the world has any doubt that Russia is a terrorist country, and its political regime has put itself on the same board as the Nazi Third Reich and the bloody Stalinist regime.

Putin’s propaganda and great-power mythology, which the Russian Federation is currently under, do not allow Russians to adequately comprehend their history, let alone critically evaluate all of the mistakes of the past and crimes of today committed by their state.

However, this time the world cannot repeat its mistake of the 1990s. The people of Russia must understand that without realizing their responsibility for the criminal actions of the authorities, they will never be able to return to the circle of civilized and democratic peoples.

The Putin regime will be destroyed for the future of the whole world.

National Museum of the Holodomor Genocide