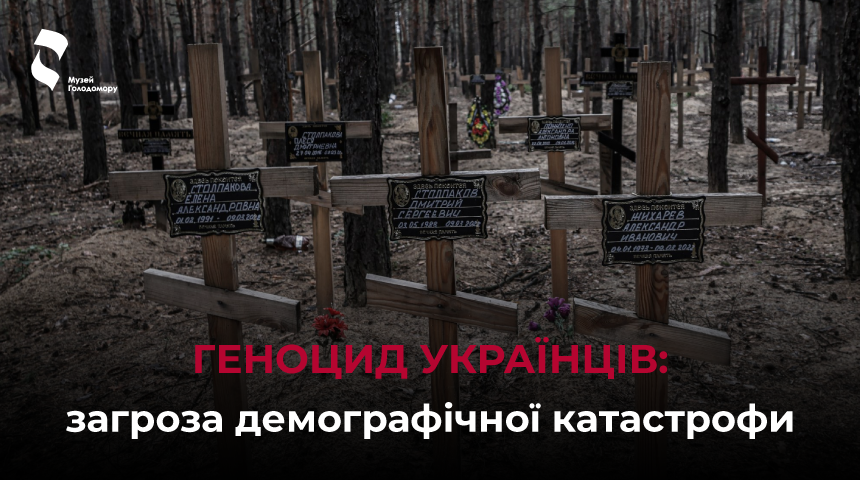 Russia’s full-scale invasion of Ukraine on February 24, 2022, is the largest war in Europe since World War II. The events of the last seven months leave no doubt about the genocidal nature of this war about Russia’s fanatical desire to destroy the Ukrainian nation as such – physically, spiritually, and mentally. The genocidal intentions of the Kremlin are now, as they were 90 years ago, an existential challenge for us and their implementation is a threat of yet another socio-demographic catastrophe deliberately created by Russia for Ukraine.

The crime of genocide of 1932-1933 took away millions of Ukrainian souls, profoundly disrupting the demographic development of Ukraine. At the turn of the 19th and 20th centuries, Ukraine possessed significant demographic potential within its ethnic boundaries – in terms of population, it was one of the largest countries in Europe at the time, and the rate of natural population growth was one of the highest. At the beginning of the XX century, the population of all Ukrainian lands was 35.8 million people. By the beginning of 1914, it had grown to 47.1 million. It was facilitated by a very high birth rate, especially in rural areas, where large families were the norm because children in a traditional Ukrainian family were considered household helpers and future support in old age.

In general, before the First World War, the first signs of the beginning of the demographic transition were typical for Ukraine – a decrease in the number of dead and a slow decline in the birth rate. The migration outflow slightly weakened the significant natural growth of the population. However, the traditions of high birth rates at the turn of the 19th and 20th centuries ensured stable population growth. This demographic development made it possible to restore the population and its structures in subsequent historical periods, in which population structures were significantly deformed due to demographic catastrophes and crises.

The First World War, the occupation of the independent UNR by the totalitarian communist regime, the “Red Terror”, and the mass man-made famine of 1921-1923 – all these factors led to significant direct and indirect losses of the population and distortion of its sex-age structure. The hostilities and terror took the lives of most adult men, which, combined with the policy of “pro-extermination”, led to mass starvation and, as a result, a significant drop in the birth rate. At the same time, the artificial famine caused greater population losses than the war, and the armed national liberation struggle – the coefficient of natural population decline in 1920-1922 was twice as large as in 1915-1919: -3.7‰ and -1.8 ‰, respectively (or -37 and -18 people per 10,000 population).

However, after such a blow and the first socio-demographic catastrophe of Ukraine in the 20th century, the demographic potential was not exhausted. And already during 1924-1928, the population of all Ukrainian lands grew annually by 0.9-1 million people.

The Holodomor genocide of 1932-1933 was a much deeper demographic catastrophe for Ukraine. The scale of this catastrophe is measured not only by millions of deaths, deportations and numerous repressions but also by the depth of the deformation of the population structures – age, social, ethnolinguistic, family, etc. The mass extinction of children and the catastrophic drop in the birth rate during and after the Holodomor left a deep dent in the demographic history of Ukraine, depriving our land of a whole generation of Ukrainians who, in turn, could be the parents of the next generation…

The totalitarian communist regime, forcibly established on the majority of Ukrainian lands in 1919-1921 and later spread to the entire territory of modern Ukraine, became a determining factor in Ukraine’s demographic vulnerability, as evidenced by the consequences of the demographic disasters and crises directly or indirectly caused by it in the 1910s-1950s.

Current crimes committed by the Russian regime in Ukraine have been recognized as genocide of the Ukrainian people by the Verkhovna Rada of Ukraine and the parliaments of other countries. Killed and wounded civilians and soldiers, kidnapping, torturing, and rape of people, looting, and millions of forced migrants and internally displaced persons (IDPs) are far from the complete list of the consequences of Russian crimes in Ukraine.

The demographic situation in the conditions of modern genocide is increasingly taking on the features of a demographic catastrophe. Direct civilian casualties are measured in the tens of thousands (according to unofficial data, 87,000 people died in Mariupol alone). The country is losing young adult men in the war (according to official reports, up to 10,000 as of mid-September 2022). According to UN estimates, about 7 million Ukrainian citizens, mostly, women and children, left Ukraine and are now abroad. Of these, about 2.7 million Ukrainians were relocated, including forcibly, to Russia. 6.9 million residents of Ukraine were forced to migrate within the borders of Ukraine.

A drop in the birth rate, the level of which was catastrophically low even before the invasion, is predicted during the war: in 2021, an anti-record of this indicator was recorded – 7.3‰! The total birth rate was 116 children per 100 women. The mortality rate is also record-breaking – 18.5‰. Accordingly, the natural reduction of the population of our country last year was the largest in the world – 11.2‰ or 112 people for every 10,000 inhabitants. These are the worst values ​​of these indicators not only since the restoration of independence but also in general for the entire period after the Second World War! And what will these indicators be in the year of the war?

The probability of the return of forced migrants from abroad directly depends on the time of the war end, the elimination of military threats from the Russian Federation and the post-war reconstruction of Ukraine. After all, the longer the duration of migrants’ stay abroad, the greater the probability that they will arrange their lives there, moreover, that relatives from Ukraine will move to them.

All this testifies to the existing and prospective deep deformations of the population structures, which were in crisis even before the full-scale invasion of the Russian Federation. The threat of a demographic catastrophe is now hanging over Ukraine – another one caused by the Kremlin’s criminal policy. In the 20th century, Ukraine experienced a number of such disasters and crises directly related to the aggression of totalitarian regimes. However, they took place at the first stages of the demographic transition, where a high demographic potential was preserved, and the traditional model of demographic behavior played a significant role. Currently, Ukraine does not have the potential to return to at least zero population growth at the expense of either natural movement or migration. The natural decline of the population and huge wave of forced migrants, among whom a high proportion of children and women of reproductive age, the significant involvement of young men in hostilities create significant “gaps” in the sex-age structure of the population and have an extremely negative impact on the processes of demographic reproduction.

Plans for the post-war reconstruction of Ukraine must contain clear narratives of preventing a catastrophic population decline, improving its natural and migratory movement, and eliminating disparities in population structures. For this, active measures of demographic and socio-economic policy will be necessary, which should be implemented in several main directions: increasing the birth rate, family policy, stimulating re-emigration, increasing life expectancy, solving the problems of active ageing, ensuring effective employment.