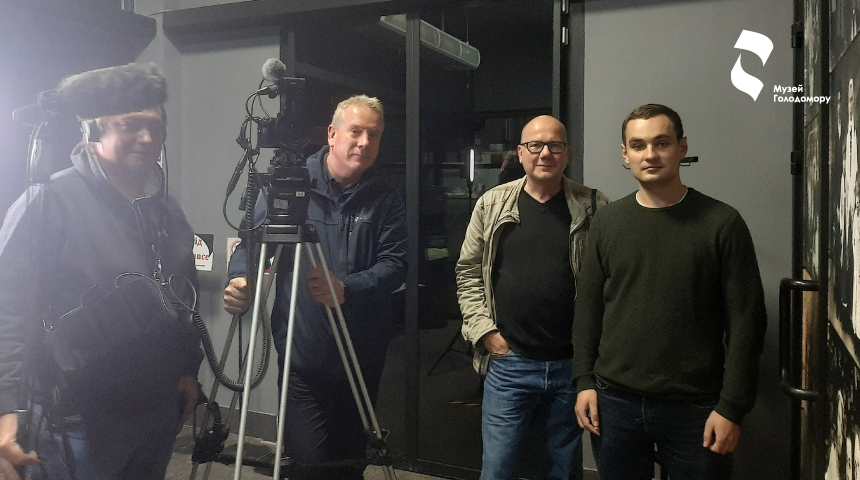 German journalist and director Dietrich Duppel visited the Holodomor Museum with a film crew. He is currently working on a documentary film about Ukraine. This is a joint project of the German state TV channel ARD and the Franco-German interstate cultural TV channel ARTE.

The film will tell the story of independent Ukraine from the pre-war period, i.e. until 2014. The film will also include deeper historical excursus, in particular, to the times of Rus’ and the Holodomor of 1932-1933.

Dietrich Duppel said that German society knew very little about the Holodomor. He himself knew nothing about this crime of the Stalinist regime against Ukrainians until a certain time. After all, they did not talk about him at school, and later – at universities.

Therefore, during the excursion, the guest was very interested in the parallels between Putin’s and Stalin’s regimes, the issues of Russia stealing Ukrainian grain and intimidating the world with hunger, as well as the history of spreading the truth about the Holodomor. Since the answers to these questions are very important for understanding the historical context of modern events.

The museum reminded of the role in establishing the truth about the Holodomor in Europe and Europeans. In particular, about the press conference of the British journalist Gareth Jones, which he gave in Berlin in 1933, and the Austrian engineer Alexander Wienerberger, who, risking his life, took and was able to export impressive pictures of the Holodomor period abroad.