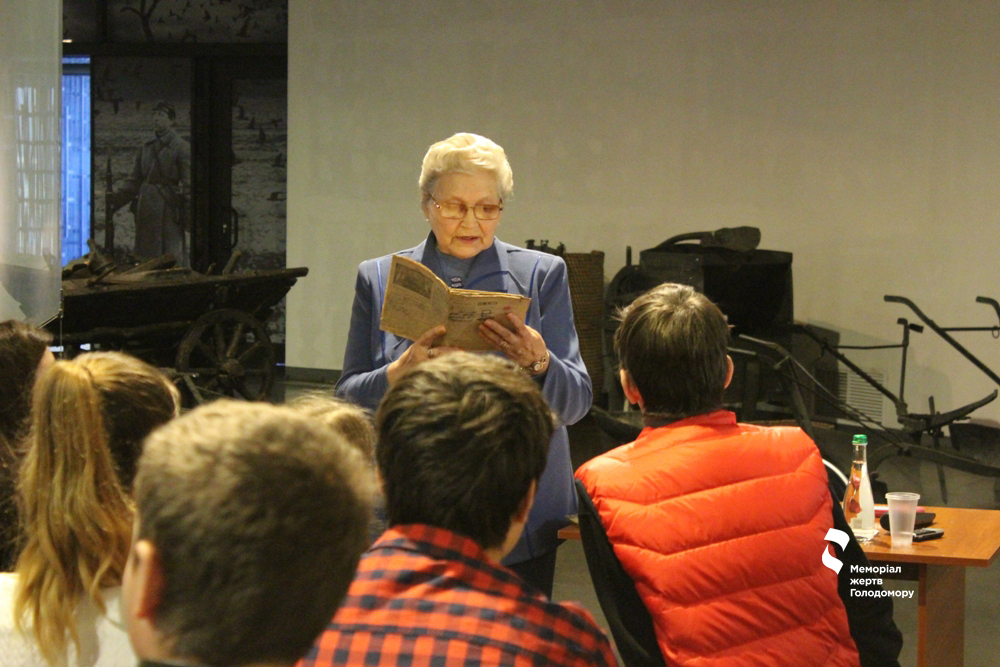 On October 17, 2018, a meeting with the witness of the massive artificial famine of 1946-1947 in Ukraine Nina Heiko was held in the Hall of Memory of the Holodomor victims Memorial.

Nina Heiko was born in 1935 in the Kharkiv region. She has lived on Donbass a long period of her life. She worked as a teacher of the Ukrainian language and literature during 47 years, and also headed the public organization «Prosvita». The woman has been forced to leave her home for the preserving her life after the occupation of parts of Donetsk and Luhansk regions by the Russian Federation in 2014. Since the occupation, Heiko has been persecuted for belonging to the Ukrainian nation.

She began her life story from 1933. She told the story of the acquaintance of her parents. Searching for salvation during the years of genocide, Semen Strykytsya from Sumy Region and Varvara Shevchenko from Kharkiv region met each other at a sovkhoz in the village Bogoduhiv. The young man worked as a carpenter, and the woman was a dishwasher. It was the way for surviving during the Holodomor.

In the period of the Second World War, Nina lost her father. In 1943, her family received a telegram about his disappearance. In adolescence, she has gone through many catastrophes. In 1946-1947, Ukraine was overwhelmed by a massive famine that was caused by the occupation government’s policy rather than war. It was the widespread fact that peasants came to Western Ukraine in order to exchange their belongings for the food. Nina’s mother assembled all valuable things and went to Western Ukraine.

Nina Heiko told about the food of that time: «Pears dried in ashes were used for preparing food. My grandmother washed them, cooked, rubbed and gave us this «dish». This dish caused abdominal pain, but there was nothing to eat. I really wanted bread!».

The respondent mentioned that her mother brought potatoes and grain from Western Ukraine. Once in the winter time, her mother was riding on the roof of the train because there was no money for the ticket. Ukrainians from Western Ukraine welcomed visitors, invited to rest on the house, and shared their meals. Only the courage and mercy of these people and her mother saved Nina and the whole family from starvation.

The guest told about the conditions at the school where she was studying at that time. There were 30 children in the class, by the spring of 1947 only 14 pupils among them survived. The woman remembered how survivors were deprived of breakfast in the spring of 1947: «A class teacher said to me: «Well, we consulted and decided that you didn’t receive the breakfast. You have a fat face and we decided that you will not die of starvation». Ukrainians hoped for improvement of the situation after the harvest in 1947.

Senior pupils of the First School of Kyiv and Klovsky Lyceum visited the meeting with the witness. Nina Heiko held a meeting in the form of a dialogue. She wanted to know what the Ukrainian children know about the Holodomor and the Famine of 1946-1947. Do they talk about it in their families?

At the end of the conversation with pupils, Nina Heiko met with the President of the NATO Parliamentary Assembly Rasa Juknevičienė. She had an official visit to the museum who at the same time. Women exchanged warm words of support and compassion. Rasa Juknevičienė remembered her relatives who suffered from the repression of the Soviet Union.