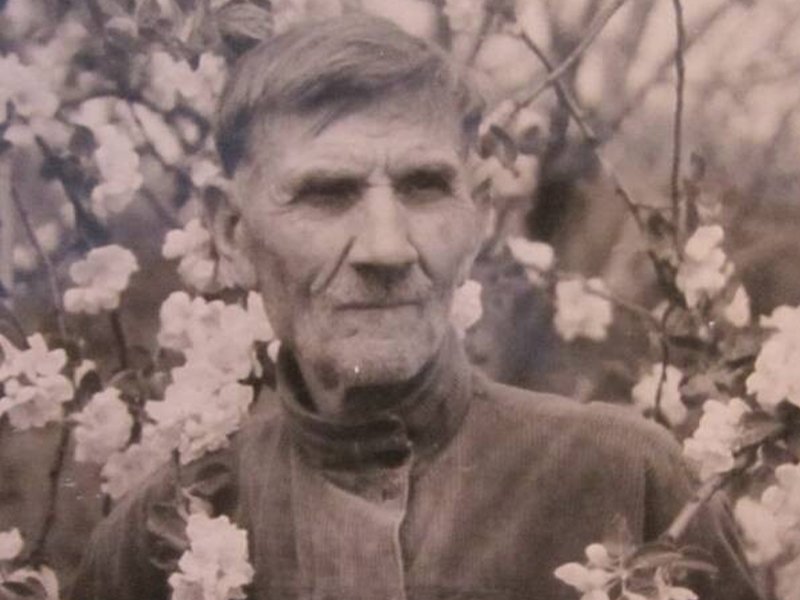 Donetsk region, the early 1930s. Semion Dugelny’s wife and daughter Liuba put their meagre family treasure on the cart, which they were allowed to take with them. The head of the family, Semion Dugelny, was sentenced to four years in the labour camps and exiled to the north of the USSR on the charge of being a kulak and unwilling to join the collective farm.

His family was criminally evicted from their own home in the village of Udachne. Their further fate is unknown. Most likely, deportation to the north of the USSR or resettlement to the worst lands of the region awaited the woman and child.

New owners are already standing near the house in the photo, usually, the villagers’ housing was given to those who actively helped the communist regime and participated in the dekulakization.

The author of the photos is an amateur photographer from Donbas, Marko Zalizniak, who managed to capture the most terrible events of the 1930s.

The Ukrainian Dugelny family was one of the hundreds of thousands who fell into the millstones of the genocidal policy of the Stalinist regime. Ukrainian peasant owners, whom the regime labelled “kulaks” and “underkulaks”, were hostile to communist transformations. The efforts of the Bolsheviks to destroy private property, to establish a monopoly on the production and distribution of material goods, and the policy of Russification encountered active resistance from Ukrainians. They stubbornly did not want to go into collective farm slavery.

A wave of uprisings and protests covered Soviet Ukraine at that time. There were numerous calls for the restoration of an independent Ukrainian state, and for an armed struggle against the colonial regime.

In order to break Ukrainian resistance, the Russian communist regime used terrible terror and repression, including the infamous policy of disarmament. Hundreds of thousands of Ukrainian private farms were destroyed. Their owners were exiled to remote regions of the USSR. Only during the period from 1928 to the end of 1931, did the number of peasant farms throughout the territory of Soviet Ukraine decrease by at least 350 thousand.

The one who photographed the genocide

In the early 1930s, Marko Zalizniak lived with his family in the Romanivka village, Donetsk region. During this time, he took a series of historical pictures — he recorded the terrible moments of the genocide of Ukrainians by the communist regime.

Marko Zalizniak learnt photography in 1905, at the age of 12. With the money collected for Christmas, he ordered his first camera from Anatoly Werner and K* in Kharkiv.

“And so I started taking photos and develepo them in the stable in a dark corner, with the door open, and got a black plate. My father, smiling, told me: “The box says ‘Photocardonet'(“net”-means “no”), so there are no cards,” Marko Zalizniak recalled. But later, a German family came to our village. And I saw their son developing a photo in the room, completely covering the windows with a blanket. I began to take photos as well, and my pictures began to turn out well.” From that time, photography became his life’s work, and the camera was always at hand.

During the First World War, Marko Zalizniak took photographs at the front. In 1916, his photo was printed on the magazine cover “Ogoniok”, which testified to considerable success.

From the end of the 1920s, Zalizniak cooperated with Dmytro Yavornytskyi. In 1931, the historian invited him to be a photographer in an archaeological expedition during the construction of the Dnipro HPP. Marko Zalizniak photographed the found artefacts and ethnographic materials. In one of his letters to Zalizniak, the scientist emphasized the importance of his case: “These are living pictures from the living life of the Ukrainian people, valuable material for the science of ethnography. Continue along the same path: photograph the characteristic types of people, their homes, clothes, household utensils, livestock – everything that is around a man and for a man.”

At any suitable opportunity, Marko Zalizniak tried to photograph his native land: weddings, gatherings of villagers, everyday life of local residents. He was invited to be the official photographer during the dekulakization in the local office of the NKVD, but Zalizniak refused.

He was not subjected to severe repression, but the memories of being arrested in 1934 for allegedly stealing a collective farm apiary remained. Zalizniak used to be a beekeeper at the time and refused to give honey to the collective farm to satisfy the personal needs of the chairman of the village council. A year later, the charges against him were dropped.

Marko Zalizniak lived for 89 years. He went through the Second World War and was wounded in the battles near Leningrad. He rarely parted with his camera and left more than 5,000 photos.

Marko Zalizniak’s photos are often used to illustrate the Holodomor events. The amateur photographer left not just a large amount of unique visual evidence but numerous records as well.

Here is what he wrote about how he managed to photograph the process of transporting the granary of the dekulakized farmer Panteleimon Yemets to the local collective farm: “During the dekulakization of the farmers of the Romanivsky khutor(village) in 1930, the leaders of the Udachne collective farm “Strana Sovietov” decided that it would be advisable to completely transport the barn to Udachne. However, when they left the village, they suffered a setback – the fence fell to pieces. Anticipating this, I followed, having loaded the camera beforehand. The fence was placed on six sleighs, pulled by six horses. People were lucky – no one was hurt, firewood was collected from the barn for heating.”

Panteleimon Yemets was arrested when grain was found in his possession during a search with the participation of activists and representatives of the NKVD. The farmer was sent to Siberia, where he died in one of the camps.