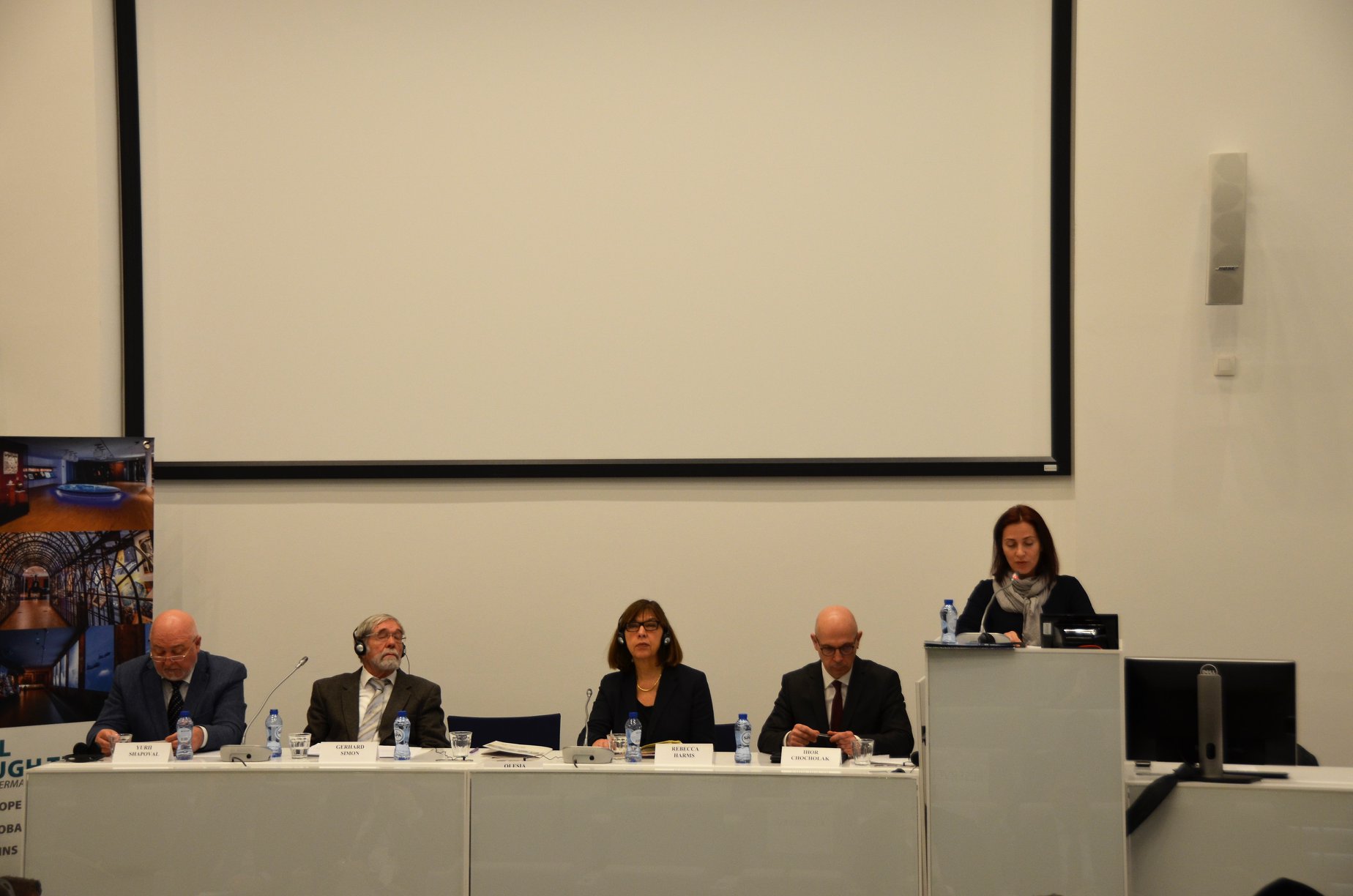 Holodomor Victims’ Memorial participated in an international conference in Brussels

On December 4, 2018, General Director of the National Museum Holodomor Victims’ Memorial Olesya Stasyuk took part in the international conference “Famine of 1932-1933 in Ukraine: tragic pages of European history” dedicated to the 85th anniversary of the Holodomor. The conference, organized by the Delegation of Ukraine in the European Union with the support of deputies of the European Parliament, was held at the House of European History in Brussels.

Opening the event, the head of the Delegation of Ukraine in the EU, Mykola Tochytskyi, emphasized that the Holodomor’s history, which for a long time was concealed by a totalitarian regime, was a part of the history of the Europe, so it was very symbolic that the event took place precisely in the House of European History. The Head of the Delegation expressed gratitude to representatives from more than 50 countries for attending the grief events of the 85th anniversary of the Holodomor-Genocide that had taken place in Kyiv.

The General Director of the of the Holodomor Victims’ Memorial made a speech: “Holodomor-genocide as a” new “narrative and a collective trauma of the Europe.” The speaker stressed that the European community and its institutions should be keen on learning the truth about the crime against Ukrainians in the 1930s, on understanding the Holodomor as a collective trauma of the Europe. And on turning this issue into one of the main issues on the political agenda, especially during negotiations with the Russian Federation, as the successor to the Soviet Union. “The issue of Holodomor is a question not only of Ukrainian identity, but also of European”, – summed up Olesia Stasyuk her statement.

Member of the European Parliament from Latvia, Sandra Kalniete, noted that the Holodomor is one of the most brutal crimes of the Stalinist regime, a crime of genocide. She stressed that the latest news (Russia’s attack on Ukrainian ships in the Azov Sea) is of particular importance for the future of the whole European Union: “Putin is testing to see how the EU and NATO respond to an act of open aggression. And obviously today we still live in a world where the authoritarian regime uses fake news to gain political influence. The silence that prevailed in the global media during the Holodomor is one of the brightest examples of misinformation in the 20th century “

Vice-President of the European Parliament, Zdzislaw Krasnodebski, emphasized that we must mourn victims of the Holodomor and continue to work on the disclosure of the truth about this crime. From the very beginning of its existence, the Soviet regime tried to destroy the Ukrainian identity. Also, the politician emphasized on the guilt of all who knew about the crime against Ukrainians, but did not react.

German EU Parlament member Rebecca Harms is convinced that the Holodomor is a part of European history, and it is extremely important to remember this genocide for the sake of our common future.

The Creative Director of the House of European History, Tha Vovk van Gaal, noted that holding conferences on the Holodomor is a direct indication that modern society is struggling to avoid repeating such crimes.

Professor Simon Gerhard highlighted the importance of disseminating information about the Holodomor in Europe and incorporating Holodomor’s history into an European historical context.

The Brussels conference was held as part of a broad campaign commemorating the 85th anniversary of the Holodomor and informing the world community about the Holodomor’s history.