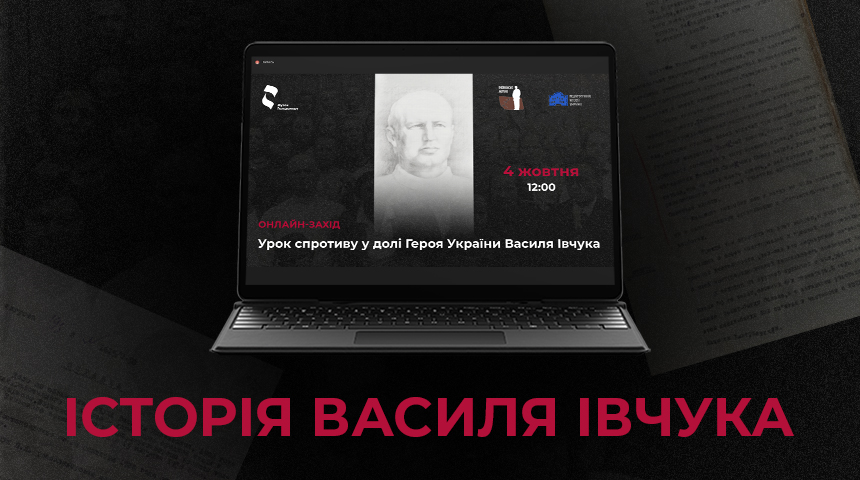 In that terrible darkness, some people saved their neighbours: the story of Vasyl Ivchuk

This year, in November, it will be 120 years since the birthday of Vasyl Ivchuk, a teacher from the Kyiv region, a benefactor, who is still fondly remembered in the village of Dudarkiv, Boryspil district. During the Holodomor-genocide, Vasyl Yakovych made significant efforts to save the students of the local school. In 1938, he fell into the grip of the “Great Terror”, was shot, and his name was lost among hundreds of thousands of innocents executed by the communist regime. Only many years later, the name of the repressed man was brought back from oblivion by the teachers and students of the Dudarkiv school because the village still remembered the feat of Vasyl Ivchuk.

On Tuesday, October 4, the biography of this extraordinary personality was discussed at the online event “Lesson of resistance in the fate of the Hero of Ukraine Vasyl Ivchuk”, organized by the National Historical and Memorial Reserve “Bykivnia Graves” in partnership with the National Museum of the Holodomor-Genocide and the Pedagogical Museum of Ukraine.

“Why is it important to research such stories? Because when it comes to the history of the Holodomor, it is most often mentioned that Ukrainians were victims who were condemned to starve to death, Yulia Kotsur, deputy general director of the National Museum of the Holodomor-Genocide, said. – However, in that terrible darkness there were people who saved their neighbours even under difficult and dangerous conditions. These aspects of history are very important to understanding what a strong and powerful nation we are. And even now, during the war years, we see that Ukrainians, in spite of everything, band together and help each other, even under occupation. And this mutual assistance of ours has deep roots… We are devastated by the Holodomor but unconquered – this is about us, about our identity, which manifested itself then and is manifesting itself now, during the war.”

As Yulia Kotsur said, Vasyl Ivchuk was born on November 21, 1902 in the village of Yablunivka in Zhytomyr Oblast. After graduating from the Higher Teacher Training Course, he taught history at the school. At a very young age, at the age of 29, he was appointed to the director position of an incomplete secondary school in the village of Dudarkiv. Students remember him not only as a talented teacher, whose lessons were always exciting, but also as an excellent organizer. When the village recovered from the difficult year of 1933, he created many free clubs at the school – a rarity for the village then.

In 1932–1933, the director’s organizational skills helped save schoolchildren from starvation. The school leased the land from the collective farm, where it grew vegetables, and the school also had an subsidiary farm – there were two cows and two horses. This made it possible to have food to provide the children with hot breakfasts. The director also agreed with the Darnytskyi meat processing plant to undergo “production practice”. There the children received a ladle of soup and a chance to survive. All this made it possible to save about 200 schoolchildren from starvation. Their names have been traced.

Active, efficient and authoritative people were always “on the pencil” in the regime. Vasyl Ivchuk was no exception. Moreover, in 1932, they tried to accuse him of counter-revolutionary activities, and due to the lack of evidence, he was released from custody.

As the students later recalled, on a sunny, fine day, May 17, 1938, the teacher was arrested for the second time. He was taken from the apartment on the territory of the educational institution; he last walked through the school yard, where children were playing. Nobody saw him anymore. The director’s family – his wife and two children – were forced to leave the village.

Only in independent Ukraine, when it was finally possible to talk about the Holodomor and name the repressed without fear, the teachers and students of the Dudarkiv school did incredible research work and restored the good name of their teacher and established the details of his death.

As Mykola Bryvko, a researcher at the “Bykivnia Graves” reserve, said it was possible to learn from the criminal case of the repressed that Vasyl Yakovych was accused of participating in a counter-revolutionary insurgent organization and anti-Soviet propaganda. Under the pressure of the investigators, on May 27, 1938, he slandered himself, stating that he allegedly “…is an active participant in a counter-revolutionary nationalist organization, which, with the help of Poland and Germany, set as its task the overthrow of the Soviet government by means of an armed uprising behind the Red Army at the time when Poland declared war on the Soviet Union.”

He was sentenced to shot. On October 2, 1938, the sentence was carried out in one of the Kyiv prisons, and the teacher’s body was taken to the Bykivnia forest. Vasyl Ivchuk was only 35 years old.

In 2007, by decree of the President of Ukraine, Vasyl Ivchuk was awarded the title of the Hero of Ukraine (posthumously). In addition, the 120th anniversary of his birth is included in the list of anniversaries and dates of 2022, approved by the Verkhovna Rada of Ukraine. The story of Vasyl Ivchuk was also included in the book “Humanity in an inhumane time,” and a memorial plaque to him was installed on the premises of the school in Dudarkiv.

It is important that the name of another extraordinary Ukrainian returned from oblivion. It is significant that we honor and remember.