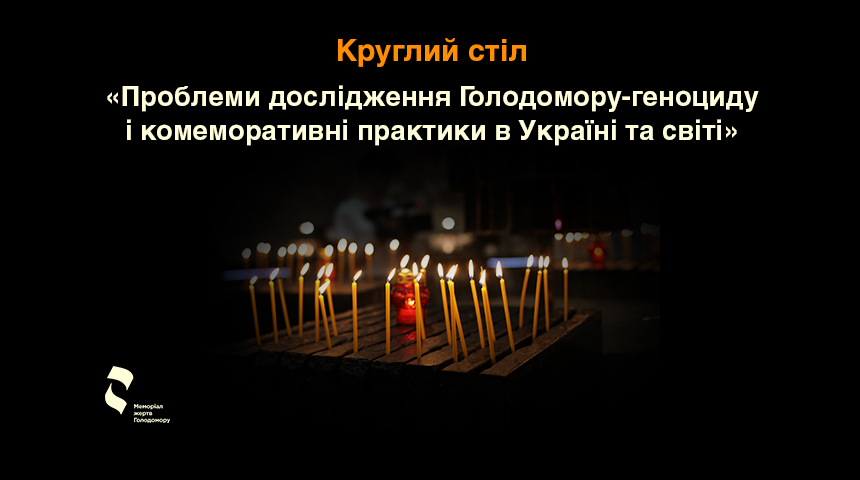 On November 21, 2018, the International Round Table “Problems of the Holodomor-Genocide Investigation and Commemorative Practices in Ukraine and the World” was held at the National Museum “Holodomor Victims Memorial”. It was participated by leading foreign and Ukrainian researchers, political scientists, lawyers and public figures.

This year the attention of the world and Ukrainian community is focused on the topic of commemorating the Ukrainians killed by starvation. At the same time, year by year, as we move away from these events, we are getting close to the discovering of their scale and substance. Along with the newly discovered facts, historical interpretations and extremely relevant findings of forensic experts and psychologists, there are still many controversial issues. In particular, recognition of the Holodomor of 1932-1933 as an act of genocide of the Ukrainian people by governments of different countries, honoring the memory of millions of innocent victims, analysis of the authenticity of Soviet official statistics, physical search and publication of archival materials are the areas for further work.

General Director of the National Museum “Holodomor Victims Memorial” Olesia Stasiuk greeted the participants of the round table. She noted that today, indeed, there are many workson the topic of the Holodomor-genocide. However, the museum continues the research, as well as attempts actively to convey the truth to all the citizens of Ukraine and foreigners.

After the words of congratulation, the moderator of the event, political scientist, Candidate of Historical Sciences Volodymyr Nakonechnyi gave the floor to the guests.

President of the Ukrainian Genocide Famine Foundation Mykola Kocherha spoke about the events organized by the Foundation in the United States. He noticed that Ukrainians, no matter where they live today, honor the memory of their brothers and sisters who starved. Holodomor of 1932-1933 was the genocide of Ukrainians. An informational war with those who still doubt about this is needed.

Historian and political scientist Roman Serbyn noted that the term “Holodomor” narrows the understanding of the genocide of Ukrainians to the murder of peasants only. Raphael Lemkin, the author of the UN Convention on the Crime of Genocide, denied such a narrow understanding of the genocide of Ukrainians. Lemkin considered the Ukrainian catastrophe of the thirties as a stage in the construction of the Russian empire. And this is how he interpreted these events in his essay “Soviet Genocide in Ukraine”.

Professor Vasyl Kostytskyi, President of the Ukrainian Lawyers Association, professor of Taras Shevchenko National University of Kyiv, said that today a hybrid war is lasting in Ukraine – the destruction of Ukrainian history, Ukrainian identity continues. It was legally established that 1932-1933 Holodomor was the genocide of the Ukrainian people, then why to discuss the number of deaths? The number of deceased does not affect the confirmation or denial of the genocide. It is necessary to continue the investigating of the mechanism of committing the crime by the Soviet totalitarian regime.

Next, the head of International Human Rights Protection Center, the associate professor of the Department of International and European Law of the Faculty of Law of the National University of Kyiv-Mohyla Academy Myroslava Antonovych agreed with Vasyl Kostytskyi and noted that the murder of even one person on a national basis is the genocide. Genocide is a series of similar actions against the nation. The main feature of the crime of genocide is the intention. And even if no document has yet been found that clearly indicates the intentions, there are many documents from the contents of which it is possible to deduce the intention of the murder

Valerii Udovychenko, who instituted a criminal investigation into the Holodomor-genocide in 1932-1933, described how the criminal case was initiated, how many different documents were collected, and which examinations were carried out.

Mykola Herasymenko, who led the investigation of a criminal case No. 475 in connection with the Holodomor genocide in 1932-1933, expressed deep conviction that it was necessary to initiate a new criminal investigation into the number of deceased persons. And in the future, not to discuss this question, but accept it as the fact.

Volodymyr Serhiichuk, Doctor of Historical Sciences, professor, acting head of the Department of History of World Ukrainian Studies at the Taras Shevchenko National University of Kyiv emphasized the importance of working out the primary documents on Holodomor that are stored in the regional archives. The historian noted that only through a thorough analysis of such documents can we give an accurate assessment of the losses of the Ukrainian nation from Holodomor.

Andrii Kis, Candidate of Medical Sciences, an expert of the highest qualification class, a doctor of the highest category, forensic medical expert, emphasized the importance of interdisciplinary research on the Holodomor. The speaker presented data showing the planning of Holodomor. Also, the documents displaying the experiments carried out by physicians and psychologists in Kharkiv at the height of the Holodomor, were shown.

Participants of the round table discussion shared professional conclusions on the topic of the Holodomor-genocide with their colleagues, discussed further directions of research and concrete steps for the development of various discussion issues.