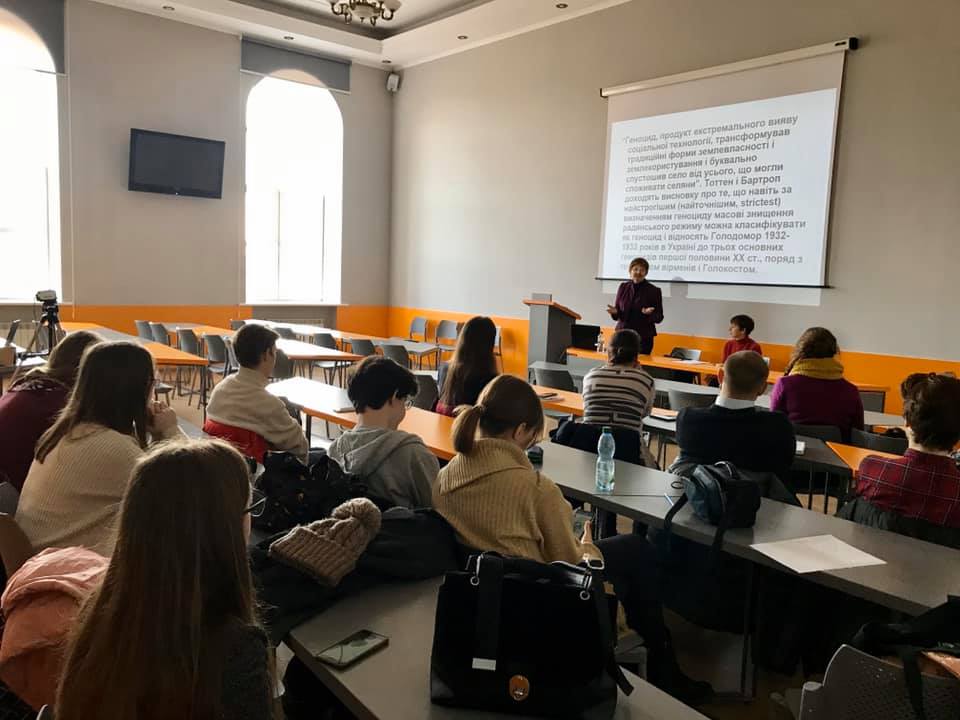 The Holodomor Museum together with the Historical Faculty of Taras Shevchenko National University of Kyiv organize Historical Winter School “Holodomor: To Know in order to Live”.

On Wednesday, December 4, 2019, the lecture “The Holodomor as the Crime of Genocide against Ukrainian Nation in accordance with the UN Convention on Prevention and Punishment of Crime of Genocide: Intent to Commit  Genocide, Victims and Perpetrators, Genocidal Actions” was delivered by Myroslava Antonovych, Doctor of Law, associate professor, internatonal lawyer, head of the Center for International Hunam Rights Defense at National University of Kyiv-Mohyla Academy, judge ad hoc of European Human Rights Court in 2010–2014, the author of more than 100 publications on international law.

The participants first considered the UN Convention on Genocide, analyzed the acts that were considered genocidal and crimes they belong to, settled on the legal issues that define genocide under the UN Convention, and how the definition of “genocide” was deepened as a result of tribunals, considered elements of the crime of genocide and their presence in the Holodomor. In the second part of the lecture, Ms. Antonovych stressed the issue of denial, recognition and responsibility for the crime.

Participants learned that under the UN Convention, genocide is an act intended to destroy, in whole or in part, any national, ethnic, racial or religious group as such. The Genocide Convention criminalizes not only genocide but also:

Myroslava Antonovych analyzed the Holodomor of 1932–33 for the presence of four elements of the crime of genocide, which fully confirms the qualification of the Holodomor as genocide.

Raphael Lemkin in his work “Soviet Genocide in Ukraine” focuses on such issues:

The lecturer added that the number of victims does not affect the qualification of genocide: even if only one or more people were killed, but with the intention of destroying the group, there was genocide.

We remind that during December 2–6, 2019, everyone can visit the lectures, focused on the study of the Holodomor genocide.