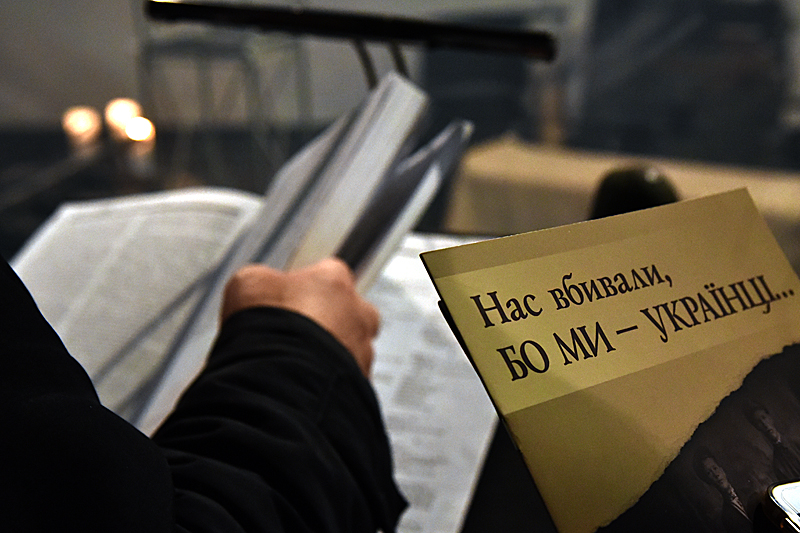 As part of the Holodomor Victims Day Remembrance Day, a banner exhibition “We Were Killed because We Are Ukrainians” was exhibited at the Center for State Security and Patriotic Education of the Security Service of Ukraine (SSU) during November 19–29.

SSU Chief of Staff Ihor Faradzhev thanked the staff of the Holodomor Museum for the exhibition, which was visited by more than 300 SSU staff and cadets.

The letter also mentioned the importance of cooperation between the Holodomor Museum and the Security Service of Ukraine. We remind that on May 22, 2009 the main investigative department of SBU initiated the criminal case No. 475 on the fact of committing of genocide in Ukraine in 1932–1933 on signs of the crime provided by h. 1 Art. 442 of the Criminal Code of Ukraine.

The investigation collected 330 volumes of the criminal case, questioned 1890 witnesses, conducted 25 judicial examinations, including medical, psychological, demographical and complex historical and legal. 5,000 archival documents were collected, including reports from accredited foreign diplomatic and consular institutions in the USSR in 1932–1935, 857 places of mass grave of victims of genocide were established.

Today the cooperation with the Security Service of Ukraine continues; in particular, the project “Books for 100 Universities and Libraries of Ukraine: Struggle for Consciousness” aimed at replenishing the funds of scientific libraries of universities and public libraries with modern scientific and popular science editions from the history of the XX century and especially about the genocide of the Ukrainian nation – the Holodomor of 1932–1933. Some of these books were published on the basis of declassified materials of the SSU.

Such cooperation is the best evidence of the commemoration of the victims of the genocide of the Ukrainian people and the historical warning that all those guilty of crimes against the peace and security of mankind will be punished regardless of the statute of limitations.