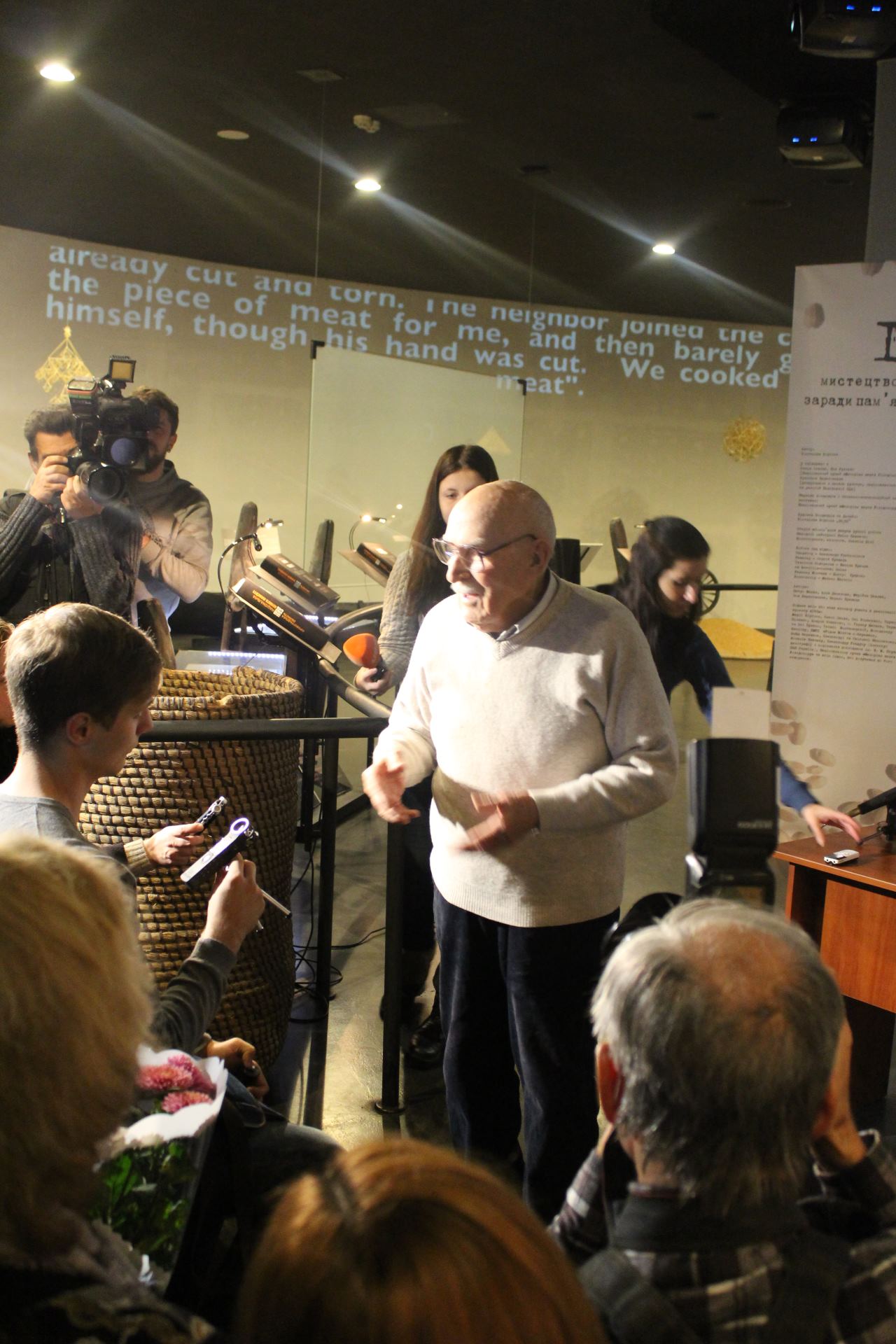 On November 18, 2016, Holodomor Victims’ Memorial held a meeting with Holodomor’s 90-year-old witness Mykola Onyshchenko. To listen to the memories of a man who survived the genocide of 1932-1933 and saw the destruction of his fellow villagers with his own eyes, came not only representatives of the press, students and students, but also ordinary Kyiv-citizens who want to preserve the memory.

Mykola survived the Holodomor in the village Rosa, on the outskirts of Berdyansk. Those two years were just the beginning, because about his life you can actually shoot a movie. There were – the World War II, the concentration camps … But despite this, he received two high educations, got a scientific degree, and most importantly, even the evacuation from the occupied Lugansk in 2014 did not take away his lust for life and the desire to make the world a better place.

– I was asked to tell you about the Holodomor. But I would not [start] right away from what did Holodomor look like. I want to start from a little bit earlier, what the life was like, how people came to this Holodomor, – began his story-confession Mykola. – I managed to see the village. And I was born in the village, grew up in the village and finished four classes in the village. And I took a glance when my grandfather and his two sons (including my father) were landlords. And I remember very well how people lived then. I could judge that life, looking at how my grandfather’s family lived, my parents.

I remember very well how I got into the attic of my grandfather. I was very surprised when I saw this picture. I remember it so far. In this attic, under a reed roof, a ham hang – a number of them, the pottery was filled with fat, sausages, lard in such boxes, honey in jars. It was a miracle. And grandfather had all this. I remember the yard … He was not rich. He had two sons. He was not a kulak then. There was a plentitude: calves, geese and horses … All … There were cherries, grapes in the garden… This is the village Novovasilivka near Berdyansk, 7 km from Berdyansk.

And so I remember another such impression. When collectivization began, I saw an empty yard: no horses, no geese, no sheep – nothing, everything is empty. Even the cow was not there. I remember, my grandmother even wept that our cow (she went to feed her, then there were not collective farms, but ‘artels’) is dying. She was tied up to a deck … I remember this too.

The next thing I remember is that those people left behind, who lost their beasts, they became beggars. What does it mean to take the land from the peasant? They were left without the most dearest … They became beggars. People fed themselves from the gardens. Then the crops were moved to these collective farms, so that people would go to collective farms in order not to starve. It was 1932, a famine. People had nothing, maybe dogs. And they received grain from the artel. Although there were some who were in need. They were persuaded to go to this artel. And people did not want to. We even had such neighbor.

And this, when I was seven years old (I had 7 years in 1932, I had to go to school), I heard from my mother that in the village of Novavasiilivka, bread was being taken, from these torn elders… Of course, you can not imagine people of that time … And no the cinema will not be able to show it. Where such people can be hired, in thin, terrible rags. The people had such clothes that it was impossible to understand which of them was the fabric. It was a patch on a patch. On a shirt, on trousers, on boots. All the village were the beggars … They heard that the bread would be taken away … Already then people were not fed well. Bread was taken from hungry people … People were taken away in the neighboring village. One day that started with us, in the village Rosa, 13 km from Berdyansk. We felt it … The tension that was felt by everyone … All were frightened. It is difficult to describe. They said that the dogs felt. From the other end of the village, they began to take away bread and cries began… I remember how my mother was running around with a bundle, in which was a bucket of corn. We were in the kitchen … A barrel with cucumbers stood beside the stove, and the mother brought a bucket. Poured out from that barrel the rosin in a bucket. Then she poured out these cucumbers, put there that bundle with grain, put cucumbers on top, put stones, and here appeared three people. One approached my mother and said: “Where is the grain?” “We have no grain.” “Where is the grain, I ask you” He said two others: go to the city, look at the attic. Mother said that we were not in that collective farm … we did not have any grain, we did not receive. My father worked in Berdyansk, in the port as a loader. We had nothing. He said that people hid the grain, buried it, masked it in the cities, somewhere in the gardens … They came up with ideas how to hide the grain. But they searched. He said: “Did you try with hook in the straw?” “Already checked.” “Were in the attic?” “Were”. “The police was searching badly.” One returned from the attic. Found nothing. Then he looked at that little barrel. He asked: why did you have dry cucumbers? He put his hand there, pulled out a bundle. He threw this bundle around his shoulders and went from the house. Mother ran after him. And  started screaming terribly. We grasped my mother’s skirt and she pulled us to the yard. There were two carts standing, people shouted. On this my impressions ends… Even the dogs were hiding …. It was violence … They took bread from us, workers, not peasants… I remember, we did not have bread. There were a lot of garden plants … Vegetables were not taken. My father worked in Berdyansk, he was given a ration, villages were influenced by famine. Those who made bread were left without bread. I do not know how much did my father get, but I remember that he brought something on Sundays, maybe more often, I do not remember. I only remember that he did not bring bread, but brought something from the port. Mother made something from that right on the stove, some kind of dishes … And we ate those pancakes. We were probably the richest in this village.

And somewhere closer to spring, hunger intensified so much that many beggars appeared. People went … and all the time they asked for something. I remember that the mother said: “Do not go out the yard, because they will eat you.” And indeed, such rumors were. I did not go anywhere, even to the neighbors. I did not see my peers. At all. It was forbidden to leave the yard.

My mother said that bread was taken by so called Committees of Poor Peasants. The biggest idlers, drinkers in the village. These are the main ones who served in the selection of bread. And when the spring began and the snow began to melt, then there were the most terrible impressions. I remember a terrible case … When a person came to our yard. He did not resemble a human actually. This person was completely swollen. Only the eyes shined. He was frightful. People have already eaten everything that could be eaten. They ate their boots, their belts, because then everything was made of leather … He was in some cloths. He walked along the road… and did not feel anything. The rags were soaked on his feet. I remember his fingers appeared from those rags … He extended his arms, asked me for something, I was very scared … And then my mother jumped out, took me away. I do not remember whether I gave something, because there was nothing to give.

From time to time was said “There lies one, there lies one”… Who picked them up, I no longer remember … The famine then diminished when the first buds on the trees appeared … When the grass began, the first weed appeared. They boiled weed, off the bark from trees, ate this .. And then I was allowed to leave the yard, I had a friend … We did not eat weed, but they … It was normal. In the summer aunt from Novavasilivka began to get bread from the mill. Only those managed to survive who hid the bread. There were such people, of course … My grandfather also hid, he was in that village … Grandfather made a mill and molted that grain. He was alive … But how many were dead in our village – I do not know … I know many were dead … In spring, many began to take out this hidden bread … That is what I witnessed during the Holodomor. That’s all I saw. “

In the last few decades Nikolay lived in Luhansk. He retired from the position of Chief Economist of the Luhansk Diesel Trains Factory, but he did not become a Soviet man. “I was offered good, well-paid positions, but I did not agree to join the party for this,” says a 90-year-old hero, who even at this age gets through difficulties. Since 2014, he and his wife have to live in Kiev in the status of temporarily displaced persons, with their friends, being deprived of many elementary goods that are so necessary to every person.