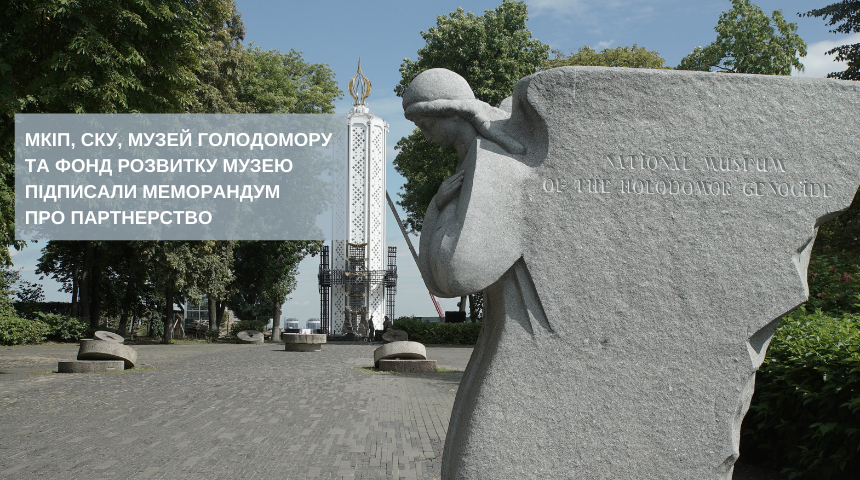 “Our Ukrainian nation was crippled by the Holodomor… Therefore, the Museum and all the work around it should be aimed at restoring our nation. The whole of Ukraine must take part in this construction,” Mykola Onyshchenko (1925–2021), a Holodomor witness and a member of the Supervisory Board of the International Charitable Foundation of the Holodomor Museum (2018–2021)

The signing of the Memorandum is important for the effective implementation of public—private partnership, designed to consolidate the efforts of the state and civil society in the restoration and preservation of national memory, public support for a modern institution, the museum complex of the Holodomor Museum, not only at the stage of its formation, but also in the future for its sustainable development.

According to the Memorandum, the Ministry of Culture and Information Policy of Ukraine represents the state part of the partnership and provides state support for the implementation of the project.

“The Holodomor is a tragic page in our history. And the whole world should know the truth about who is responsible for it. For decades, the Soviet government hid this terrible reality in which millions of people lived. It purposefully concealed the act of genocide of the Ukrainian people. The museum complex will provide access to true information about what really happened at that time. No understatement or pseudo-facts. Its construction is a very important step towards perpetuating the memory of both all Ukrainians and those who also suffered from the inhuman repressions of the USSR. History is not forgotten,” Oleksandr Tkachenko, Minister of Culture and Information Policy of Ukraine, said.

The National Museum of the Holodomor Genocide is responsible for the maintenance of the main exhibition, which will be created inside the building under construction. A scientific concept of the exposition has already been developed on the basis of the museum. The museum provides the work of a content group, which includes museum employees, as well as museologists, historians and specialists from other related disciplines. Also, on the basis of the museum, an international Expert and Scientific Council has been formed.

In accordance with the Memorandum, the Ukrainian World Congress corresponds to the international support of the projects to create the Museum of the Holodomor.

“The Ukrainian World Congress is actively involved in the creation and development of the Holodomor Genocide Museum. For decades, we have consistently conveyed to the world the truth about the terrible crime of the Stalinist regime and stand for the international recognition of the Holodomor as an act of genocide of the Ukrainian people. Attraction of international support will contribute to the creation of a world-class museum and make it famous not only within Ukraine, but also on a global scale,” the UWC President of Paul Grod said.

The architectural design of the museum building as part of the second stage of the construction of the Memorial Complex in memory of the victims of the Holodomor in Ukraine was developed by the Ukrainian workshop of Project Systems LTD in collaboration with the Polish studio Nizio Design International. In 2017, at the stage of the preliminary design, it received a positive assessment from the advisory body of the UNESCO World Heritage Center. An international design consortium of Nizio Design International (Poland) and Haley Sharpe Design (Great Britain) is working with Ukrainian scientists and specialists to create a design project for the main exposition of the Holodomor Museum.

The International Charitable Foundation of the Holodomor Museum was founded to promote the activities and development of the National Museum of the Holodomor Genocide. Together with a partner of the Canadian-Ukrainian fund, the Foundation is responsible for conducting a fundraising campaign, the purpose of which is to financially and informally ensure the implementation of the project in terms of creating and implementing the main exposition of the museum, arranging the internal space and establishing an endowment fund for the sustainable development of the Museum in the future. The Foundation’s Supervisory Board includes famous personalities: Primates of Ukrainian Churches, His Beatitude Sviatoslav (Shevchuk) and His Beatitude Epiphanius, Viktor Yushchenko, Filya Zhebrovska, Prime Minister of Canada Stephen Harper (2006–2015), Prime Minister of Australia Tony Abbott (2013–2015), public figures and business representatives to be directly involved in the implementation of the statutory tasks of the Fund and to be guarantors of maximum efficiency in the use of funds.

Created by joint efforts and open to visitors in 2023, the museum will tell not only about the history of the crime of the genocide of the Ukrainian nation, the Holodomor of 1932–1933, but also about the strength and invincibility of Ukrainians, dignity and many years of struggle in the name of a single eternal aspiration—life in a sovereign successful Ukrainian state. The museum will disseminate knowledge that will become not only an antidote to any attempts aimed at denying the crime of the Holodomor, disregard for human rights and repetition of the crimes of genocide in the future, but also the foundation for strengthening democracy in Ukraine.