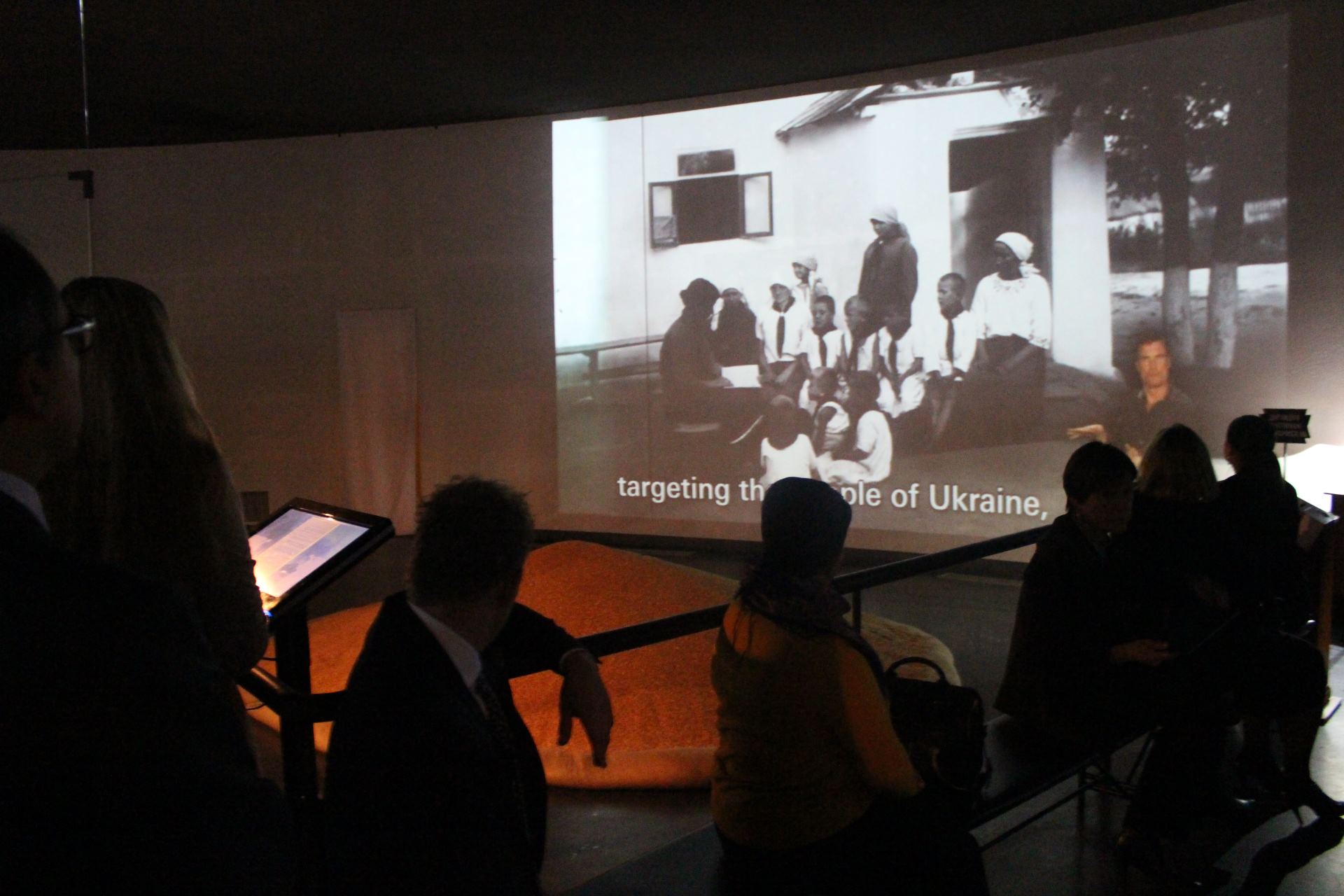 The Presentation  of educational movie “Covering the Holodomor: Memory Eternal” took place in National museum “Holodomor victims’ Memorial” on November 15, 2016. The film was created by the Canadian Human Rights Museum in collaboration with the Holodomor Victims Memorial. The film is duplicated in the Ukrainian language for the school audience. When it was created, documentary materials from the Holodomor Memorial Foundation funds were used. The film explores the role of the media in overcoming the silence surrounding cases of human rights violations, one of which was the genocide of Ukrainians, the Holodomor. The storyline focuses on the international press, which publishes information about the Holodomor. The central focus is the media struggle: Walter Duranty, who was sympathetic to Stalin’s policy and denied the famine, and journalists Gareth Jones and Malcolm Maggerid, who tried to convey the truth. Also here are the important questions raised: what is the role and functions of the media in shaping public opinion about human rights violations? What can we do, as a personality, as a community, as a nation, to ensure that genocides, such as the Holodomor, never happened again?

Educational film ” Covering the Holodomor: Memory Eternal ” will be used for excursions and interactive lessons for schoolchildren in the museum, and during 2016-2017 it will be distributed among educational institutions of Ukraine for its application in the study of the course of Ukrainian history of the twentieth century.

The Canadian Human Rights Museum in Winnipeg (Manitoba Province) opened in September 2014. It took 6 years to build and 350 million dollars. According to the plan of the founders, it should become a world information center devoted to the history of the development of human rights protection. The museum is funded by the Canadian government, operating expenses amount to $ 22 million a year. To date, the Museum has collected 160 works of art, there are 10 permanent galleries and historic sites, 7 theaters with hundreds of hours of videos and films, as well as interactive exhibits. Exhibits on the Holodomor of 1932-1933 in Ukraine, Armenian Genocide, the massacre in the Bosnian Srebrenica, the destruction of Hutu and Tutsi in Rwanda, the Holocaust and many others are presented here. In 2012, a Memorandum of Cooperation was signed between the Canadian Museum of Human Rights and the National Museum ” Holodomor Victims Memorial in Ukraine”. In September 2016, the organizations signed an agreement on cooperation and a new version of the Memorandum.

For more information about the museum, as well as the program of events for the Day of Holodomor victims memory, you can find out on the official website of the museum and its page in Facebook.