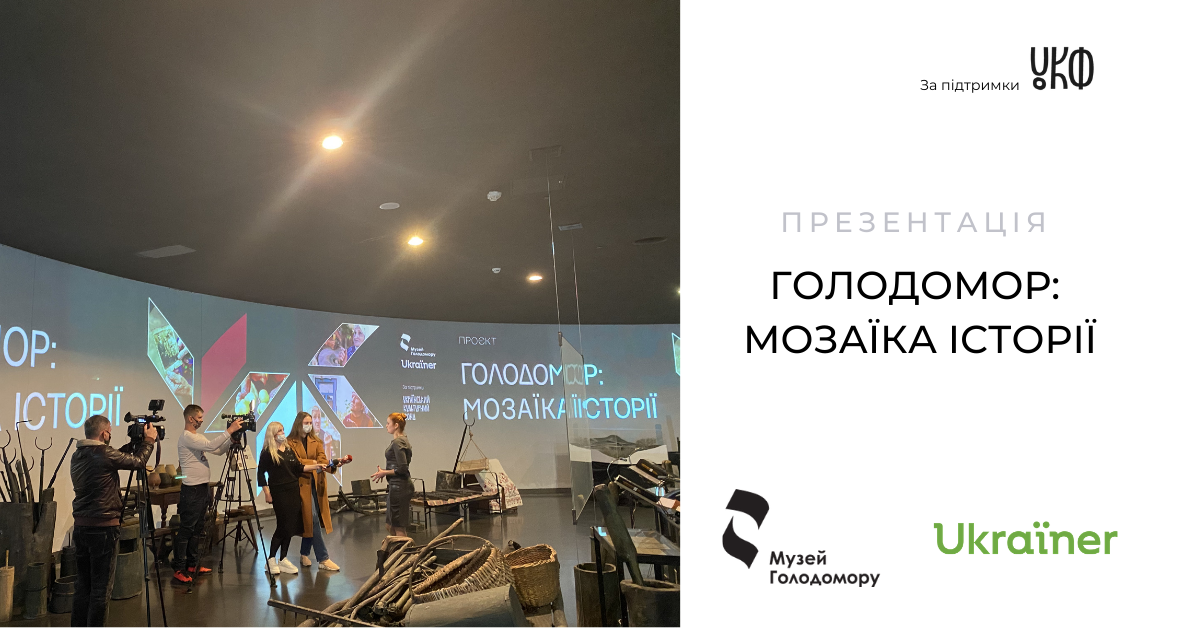 Presentation of “Holodomor: Mosaics of History”, Joint Project of the Holodomor Museum and Ukrainer

On October 28, a large project “Holodomor: Mosaics of History” was presented. Within two months, the Holodomor Museum and Ukrainer teams made an expedition to 9 regions of Ukraine, during which they recorded 120 stories of the Holodomor witnesses, talked to 50 local historians and discovered 66 places of mass burial of genocide victims.

The project was implemented with the support of the Ukrainian Cultural Foundation.

Witnesses of the Holodomor, whom the team talked to during the expedition, handed over unique thins to the museum, such as a silver spoon, which belonged to the family of Marfa Kovalenko and which was preserved during the Holodomor. Some of the silver things were exchanged by Marfa Kovalenko’s grandfather in the torgsin for food, but this spoon remained.

You can watch a video of the presentation on the official Facebook page of the Holodomor Museum.

Yuliia Kotsur, deputy director general of the Holodomor Museum and project coordinator, said, “Today we are presenting an important and large project for those who want to learn more about the history of the genocide of Ukrainians and hear eyewitnesses’ accounts. In addition, the Museum together with Ukrainer launched a series of videos in the project. Five video stories have already been released, where Holodomor witnesses told how they survived the genocide of the Ukrainian nation: ‘She survived the Holodomor and saved a boy,’ ‘They endured on potato peels from Belarus,’ ‘They even took pillows away,’ ‘Never take what is not yours, even during the Holodomor,’ ‘A whole hamlet saved during the Holodomor.’ The project also contains 4 explainers that tell ‘What is the Holodomor’, ‘Common Lies about the Holodomor’, ‘How does the Holodomor influence Ukraine today?’, ‘The Holodomor in the global context.’

Project curator Larysa Artemenko said, “Each local study helps to understand the peculiarities of the Holodomor in a particular region. We went on an expedition to Ukraine to collect as much eyewitness testimony as possible, to record mass burial sites, and to record interviews with local historians. Our route passed through Kyiv, Chernihiv, Sumy, Zhytomyr, Vinnytsia, Cherkasy, Kirovohrad, Odesa and Mykolaiv regions. Until now, the museum has not organized expeditions of this scale.”

Bohdan Logvynenko, the author of the Ukrainer project, said, “We had a unique time and opportunity to implement this project. For Ukraïner, this project is important missionally. We recorded and shared stories from different regions that have not been heard by society for many years. We realized how valuable the stories of Holodomor witnesses collected during the joint expedition are, because there are so few of them left. “

The recorded stories can be found on the museum resource “Testimonies.”

5 video stories and explainers about the Holodomor can be viewed on the Youtube channel of Ukrainer.

The content is available not only in Ukrainian but also in English. This will help popularize the topic abroad and recognize the Holodomor as an act of genocide in the world.