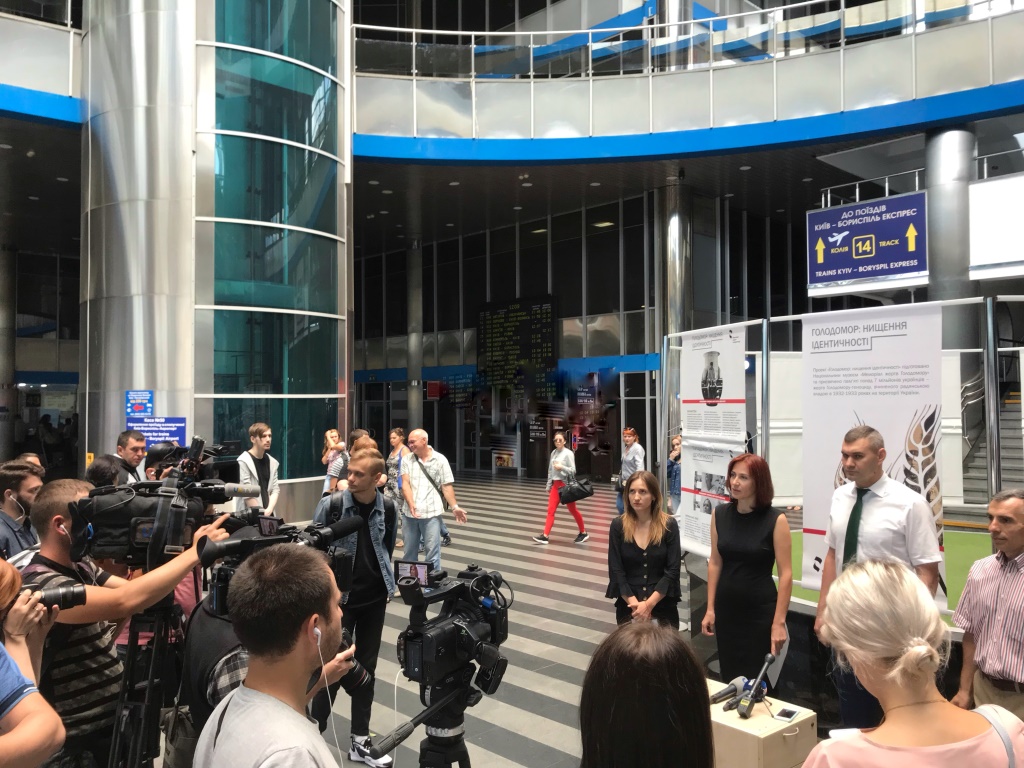 Project "Holodomor: the Destruction of Identity" at the Pivdennyi Railway Station

The exhibition about the Ukrainian nation and everything that creates it, made by the National Museum “Holodomor Victims Memorial” was presented at the Pivdennyi railway station (Kyiv).

On July 4, 2019, at 12:00, at the Pivdennyi Station, the National Museum “Holodomor Victims Memorial” presented an information exhibition project “The Holodomor: Destruction of Identity.”

Within two months, Ukrainians and foreigners will have the opportunity to get acquainted with a project that tells about the unique phenomena of culture and science, and people who have changed history.

The exhibition was presented by Director General of the Holodomor Victims Memorial Olesia Stasiuk, Advisor to the Minister of Culture of Ukraine Anatolii Brovii and director of the Holodomor Research Institute Viktor Brekhunenko.

The exhibition is presented in three formats: as information banners it was demonstrated in five museums of Ukraine, in the form of posters it “traveled” by all the metropolitan areas of ​​Ukraine, and also It is available in a booklet format, which is translated into English. We plan to create a video based on these materials in order to demonstrate it on the railways of Kyiv, Lviv, Kharkiv, Odesa and Dnipro.

Advisor to the Minister of Culture Anatoliy Brovii emphasized Ukraine’s losses as a result of the Holodomor, which led to the destruction of customs, traditions, culture, science, and education.

Director of the Holodomor Research Institute Viktor Brekhunenko spoke on the importance of preserving the memory of the Holodomor: “Only those people who remember their past have a future. If we want to remain a self-sufficient Ukrainian political nation, we must apply to this pattern. The Holodomor of 1932–1933 should take a key place in the historical memory of Ukrainians as a crime of genocide. This exhibition is intended to remind us as a post-genocide nation about this page of history.”

“The Holodomor: Destruction of Identity” project consists of 23 posters, which have been created by the team of the National Museum “Holodomor Victims Memorial” and can be transferred to a temporary exhibition for other museums and institutions.

Due to technical issues, with you can get acquainted with an exhibition at the Pivdenny Railway Station by July 9, 2019.