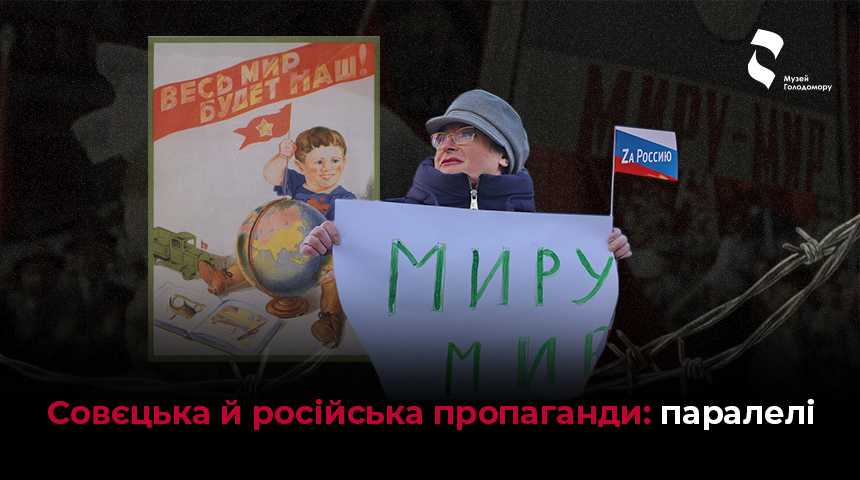 Aggressive government propaganda, along with a one-party system and terror, is a hallmark of an undemocratic society. Usually, totalitarian states set their propagandists two tasks: first, to highlight the current situation in the economy and political life of their own country in the most beneficial way for the authorities; secondly, to discredit any opponents of the regime. The quintessence of totalitarian propaganda is disinformation. Any totalitarian regime tries to ensure that certain information remains unknown to society at all, or, if it reaches people, only in a deformed, distorted form.

Among the reference examples of brutal and insolent totalitarian propaganda of the 20th century one of the leading places is occupied by Soviet agitprop – the product of the agitation and propaganda department of the Central Committee of the CPSU. The influence of this odious institution was so strong that all Soviet propaganda is now called agitprop. Soviet propagandists kept quiet about failures and exaggerated successes, manipulated facts, offered false interpretations of events, speculated on national or social phobias, incited public hysteria, and ultimately resorted to outright fabrications.

Soviet propaganda disappeared with the collapse of the USSR. Many expected that Russians, deprived of ideological dictates, would build a pluralistic society with freedom of speech. However, at the beginning of the XXI century, Russia returned to its familiar model of an information space fully controlled by the authorities. The Kremlin’s proposed recipe for “getting up from its knees” and “sovereign democracy” was simple: the more control over information, the more power. Information control for Putin’s regime meant not only deception of Russian society but an opportunity to unlearn Russians from asking questions inconvenient for the regime.

Between the propaganda of the USSR and modern Putin’s Russia, many parallels are noticeable, both in the methods of activity and in the content of the narratives. First of all, the integrity of the propaganda apparatuses of the USSR and modern Russia is striking. In modern Putin’s Russia, like in the communist Soviet Union, official propaganda works in three spheres: informational, educational and cultural. Not only mass media and paid propagandists of the Kremlin but also film producers, book publishers, educators, members of public associations, etc., take part in propaganda activities. In this way, the Kremlin regime forms a “closed propaganda space”: people, deprived of any alternative sources of information, and propaganda messages are fed to them in small doses, hiding them in seemingly neutral from the point of view of ideology, products of mass culture. As one of Putin’s propagandists put it, the Kremlin managed to create a system of “narrative censorship”: Russians do not perceive and do not want to hear about those facts that do not fit into the mental templates formed in their heads. In the picture of the world created by Russian propaganda, Putin is the smartest, strongest, and most far-sighted political leader of our time. He thought everything in advance and defeated everyone.

In addition to the methods of activity, Soviet and Putin propaganda united by a focus on the enemy figure. Dangerous and deceitful enemies, who surrounded “the first country in history of workers and farmers” from all sides, and the fight against which was the “sacred duty of the entire people”, were among the main themes of Soviet propaganda. Constant references to the enemies’ machinations helped the communists to explain and justify the unpopular steps of the authorities, which led to the deterioration of the living standard in the USSR. The Bolsheviks maintained a sense of permanent threat among the people, thanks to which they mobilized them to carry out their whimsical plans.

A similar picture of the world is drawn by modern Russian propagandists: – “Russia is the strongest and most successful country in the world, which is why the West is jealous of it and tries to harm it in every possible way.” External enemies from the West are helped by internal traitorous enemies. Ukraine is an “artificial project of the West – Anti-Russia”.Talking about the confrontation with the soulless West, Putin’s propagandists do not hesitate to use direct borrowings from the narratives of the Soviet era. Stories about the victory over Nazism in the Second World War play a specific role in these processes. The exploitation by Putin’s propagandists of the mythology of the “Great Patriotic War” created in Soviet times should, obviously, be recognized as the most successful project of Russian propaganda of the last twenty years. For the sake of mobilizing supporters of the regime, propagandists paid by the Kremlin promote the ideas of the priority of state interests over individual ones, the cult of power and heroic history, imperial revanchism, the “longing for a strong hand”, etc. Behind this “smoke-screen,” the Russian authorities hide from their citizens the fact that they are robbed mercilessly, and the Russian state is rotten from top to bottom.

At the current stage of its development, Putin’s propaganda is rapidly catching up with the worst examples of communist propaganda from the Stalin period. After the full-scale invasion of Ukraine by the Russian army, real censorship was introduced in the Russian Federation. People were forbidden to use the words “war” and “intervention”.People who tried to talk about the war against Ukraine were repressed under the pretext of spreading fakes about the Russian army. These measures, at first glance, gave their results. In March 2022, 83% of Russians supported Putin, and 74% approved of the war against Ukraine. However, Russian propaganda proved to be completely helpless outside of Russia. Despite the titanic efforts of Russian propagandists and pro-Russian agents of influence, the Kremlin failed to convince Western countries that Ukrainian statehood was doomed and it was unnecessary to help Ukrainians. Moreover, outraged by the brutal lies and outrageous cynicism of Russian propagandists, the countries of the European Union banned the broadcasting of the Russian propaganda channel RT (formerly Russia Today).

The defeats suffered by the Russian aggressors in Ukraine demonstrated to the whole world that the power of the Putin regime is, to a large extent, virtual. The power and invincibility of Putin’s Russia turned out to be fake. Putin, who from the very beginning built his system of power on lies and manipulations, fell into a trap in which the USSR also died at one time. Having built a strictly controlled and dosed system of information movement, it is impossible to make the right decisions on the basis of a distorted picture of the world formed by ubiquitous propaganda.