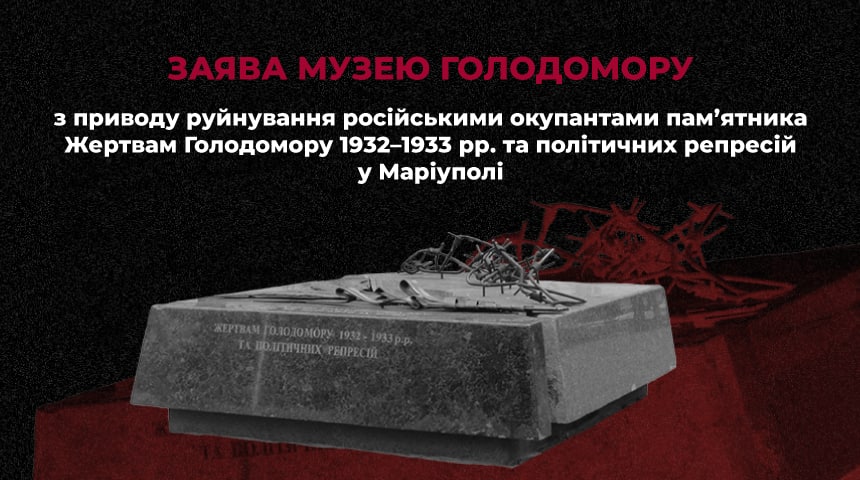 about the destruction by the Russian invaders

and political repressions in Mariupol

The National Museum of the Holodomor-Genocide expresses its regret and outrage over the barbarous destruction of the monument to the Holodomor Victims of 1932–1933 and political repressions in Mariupol, temporarily occupied by Russian invaders. The modest monument, broken by Russian barbarians on October 19, 2022, was opened on November 26, 2004, at the initiative of the Mariupol Historical and Educational Society “Memorial”. The monument, devastated by the Russian invaders, was a material reminder of the death of tens of thousands of residents of the former Mariupol district who died during the Holodomor of 1932-1933, as well as several thousand people killed during the political repressions of communist times. The place of the last rest of many of them is unknown to this day. Considering this, the monument in Mariupol was the memorial space where many residents of Mariupol and the surrounding areas could bow to the memory of their relatives exterminated by the totalitarian regime.

The destruction of the monument took place with particular cynicism: Russian propagandists announced that the granite parts of the one would be broken up and used as building material. Anton Bobrovskyi, Yevheniya Krotova and Olha Shmachkova, who pretended to be public representatives, provided information support for the destruction of the monument. Approving the shameful and shocking act of vandalism, they made immoral propaganda statements that the monument destroyed by the occupiers allegedly “was a symbol of political disinformation of the population” and “imposing the idea of ​​genocide and the Holodomor.”

We would like to emphasize that denial of the Holodomor has been an essential component of the historical policy of modern Russia for a long time. Manipulation of public perceptions of the communist past is an important tool for the Russian authorities to mobilize supporters of President Putin’s anti-Western political course psychologically. In addition, the deliberate silencing and distortion of the Holodomor history serve as one of the tools of the information war that the Russian Federation is waging against Ukraine. The Russian dictator is unspeakably annoyed by the fact that Ukrainians overcame the totalitarian legacy of the USSR and made their choice in favour of European values, and respect for humans and their inalienable rights. That is why the monument to the Victims of the Holodomor of 1932-1933, destroyed by the latest barbarians, had the inscription: “Let’s not forget the tragedies of the past, so as not to experience them again.”

Putin’s dictatorship chose the diametrically opposite vector of social development. During the last decade, the moral rehabilitation of Joseph Stalin took place in Russia. The telling fact is that in December 2021, the Moscow court banned the activities of the historical, educational and human rights organization “Memorial” in Russia, which had been studying Stalinist crimes since 1987.

The destruction of the monument to the Victims of the Holodomor of 1932-1933 and political repressions in Mariupol is not an isolated fact. In April 2022, the occupiers destroyed a monument to one of the founders of the city, Metropolitan Ignatius, in Mariupol, and in May, a monument to Hetman Sahaidachny in the village of Manhush. Waging aggressive war against Ukraine, the Russian invaders do not even try to hide the fact that they intend to destroy Ukrainians as a nation. Erasing the memory of the history of Ukraine, of the millions of people who became victims of the genocide organized by the Kremlin, are elements of a new genocidal plan. The Russian Federation’s denial of the Holodomor is a denial of Ukraine’s right to its history. Therefore, a poorly concealed form of denying Ukrainians the right to an independent state and national existence.

We appeal to law enforcement agencies to investigate the brazen and cynical crime as soon as possible and identify all those involved in the destruction of the monument to the Victims of the Holodomor 1932-1933 and political repressions in Mariupol. We sincerely hope that a fair punishment for insulting the memory of millions of victims of the Holodomor will not escape any of those involved in this crime.