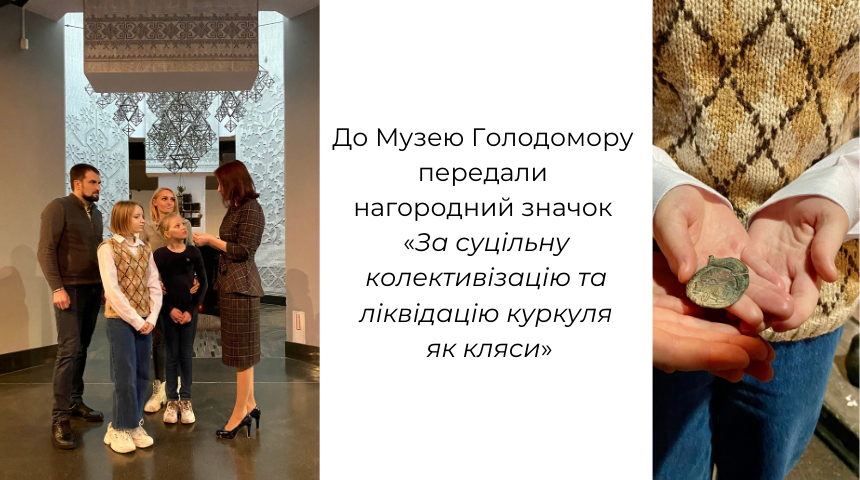 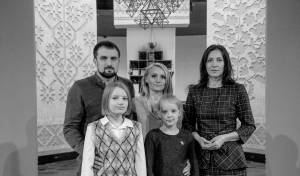 Marina and Iryna Sheleheda handed over the badge “For Total Collectivization and Liquidation of the Kulak as a Class” to the Holodomor Museum.

After learning about the Holodomor in a history lesson, the schoolgirls continued to explore the topic at home with their parents. Maryna learned that the Holodomor Museum was looking for exhibits from the 1920s and 1930s and decided to find family items related to the history of the Holodomor. However, they did not find anything. Then the parents offered to find the exhibits on the Internet and transfer them to the Museum. Thus, the award sign “For Total Collectivization and Liquidation of the Kulak as a Class” was discovered. It has been manufactured and used since the second half of the 1920s.

This badge was awarded to the Bolshevik activists who pursued the criminal policy of the communist totalitarian regime, participating in the collectivization and dekulakization of Ukrainians. “The badge was presented as a reward for taking away cattle and other food from Ukrainians. There was a reward for such bad things,” Iryna Sheleheda said.

Wealthy peasants, who skillfully organized their economy, were called kulaks. In the 1929s and 1930s, the kulaks included anyone who resisted collectivization or grain procurement plans. Stalin personally proclaimed the policy of “eliminating the kulaks as a class.”

“I heard about the Holodomor in class and couldn’t imagine how this could happen: people had nothing to eat. I was very impressed and I want a lot of people to know about it. Dad said that if the Holodomor was known, it would not happen to Ukraine again,” Maryna Sheleheda said.

Scarves, letters, embroidered shirts or party tickets, household items and photos from the 1920s and 1930s can all become an exhibit of the Holodomor Museum and tell the whole world about the genocide of Ukrainians. Every thing that has a history and a memory is priceless and worth preserving.

❗ If you have things related to the Holodomor, tell us about them by writing to [email protected]