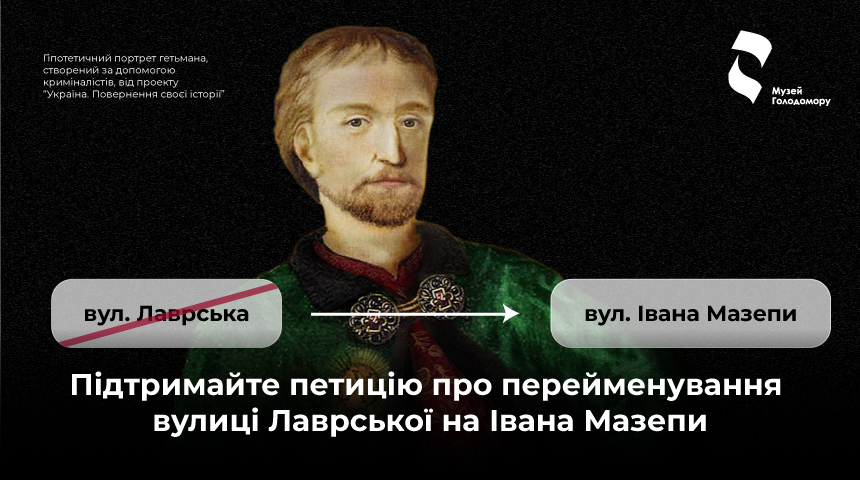 Dear friends, the Holodomor Museum may change its address. No, we are not moving. We only support the public initiative to rename Lavrska Street to Ivan Mazepa Street. A corresponding petition has already been created on the website of the Kyiv Council.

We will remind you that our museum was originally built on the street named after Ivan Mazepa. On the same one was the Kyiv-Pechersk Reserve. Churchmen with the governing centre in Moscow did not like it very much. And in 2010, they pushed through Yanukovych and Chernovetsky an illegal decision, according to which Ivan Mazepa Street was divided into two parts and the one starting from Slava Square was renamed Lavrska.

In a comment to the petition, its author Andrii Lupak emphasizes that the outstanding hetman and generous patron Ivan Mazepa deserves a worthy street in his honour in this very place. Only on the territory of the Kyiv-Pechersk Lavra were the Trinity Gate Church (built in 1106–1108), the Assumption Cathedral (1073–1089), and the All Saints Church built above the Economic Gate (1696–1698) financed by Ivan Mazepa. The Stone Wall of the Lavra (1696–1701) and the Mykylsky Military Cathedral (1690–1696) which stood on the present-day Slava Square and were built at his expense, then were destroyed by the Bolsheviks in 1934.

Therefore, we are asking you, dear friends, to support the petition for renaming.

You can sign on the website of petitions by clicking the link or in the application Kyiv Digital/More services/Electronic democracy/Petitions.