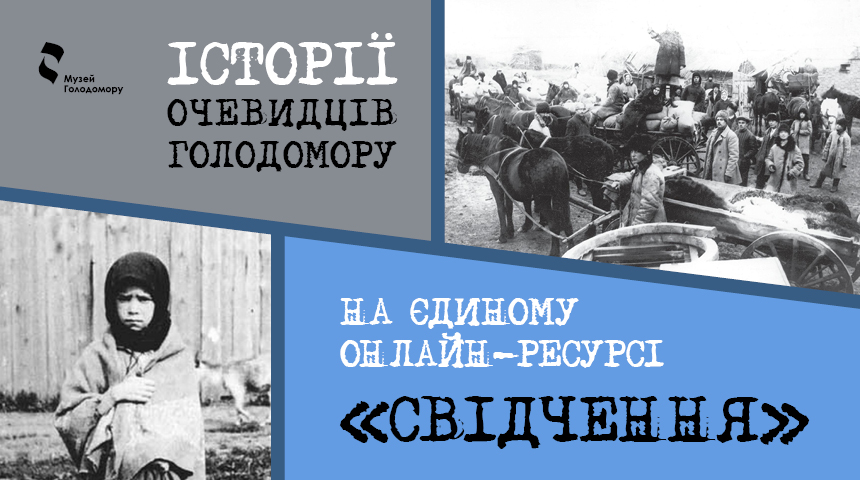 National Museum of the Holodomor-Genocide created the page “Testimonies”, which is the only online resource, where the personal stories of the witnesses to the Holodomor of 1932–1933 and mass artificial famines of 1921–1923 and 1946–1947  will be stored. History of ech person is unique, but all of them tell the truth aboout the most horrible crimes of the Soviet authorities.

What the page “Testimonies” contains: The online resource contains video and audio testimonies, photos and digitized text memories of the Holodomor genocide and mass artificial famines of 1921–1923 and 1946–1947 vitnesses. The testimonies are organized thematically and on an administrative-territorial basis.

Today, the section “Holodomor-genocide” is the most filled. It is based on materials collected by the Holodomor Museum as part of the “Oral History of the Holodomor” project. During its implementation, audio and video testimonies of the Holodomor eyewitnesses from various regions of Ukraine were recorded.

The page also contains eyewitnesses’ stories from the museum’s collections, which were collected and donated to the museum by local historians, students, schoolchildren, institutions and organizations.

What’s new: Each user can search for the testimony by location, time, or hashtag. We propose to investigate the history of the Holodomor-genocide and mass artificial famines through the memories of eyewitnesses from their city or village, district or region. National memory is what unites us, and oral testimonies allow us to feel how individual people went through those horrible years.

History of creation: Not only the museum team, but also volunteers worked on the preparation of materials for filling the page. Subscribers to the Holodomor Museum page, students of the Ukrainian Leadership Academy, and the Ukrainian Volunteer Service supported the museum’s project by helping to decipher the testimony. Work on the project continues. Anyone can join further work by writing to [email protected].

How the resource will evolve: Today, the Testimonies page contains 250 stories. Every month the resource will be filled with new memories of witnesses and new marks on the map of Ukraine. Anyone can join in filling it out by donating family stories, photos or contacts of the Holodomor witnesses and mass artificial famines survivors to the museum.

he lived in Pivni vallahe of Fastiv district of Kyiv region. 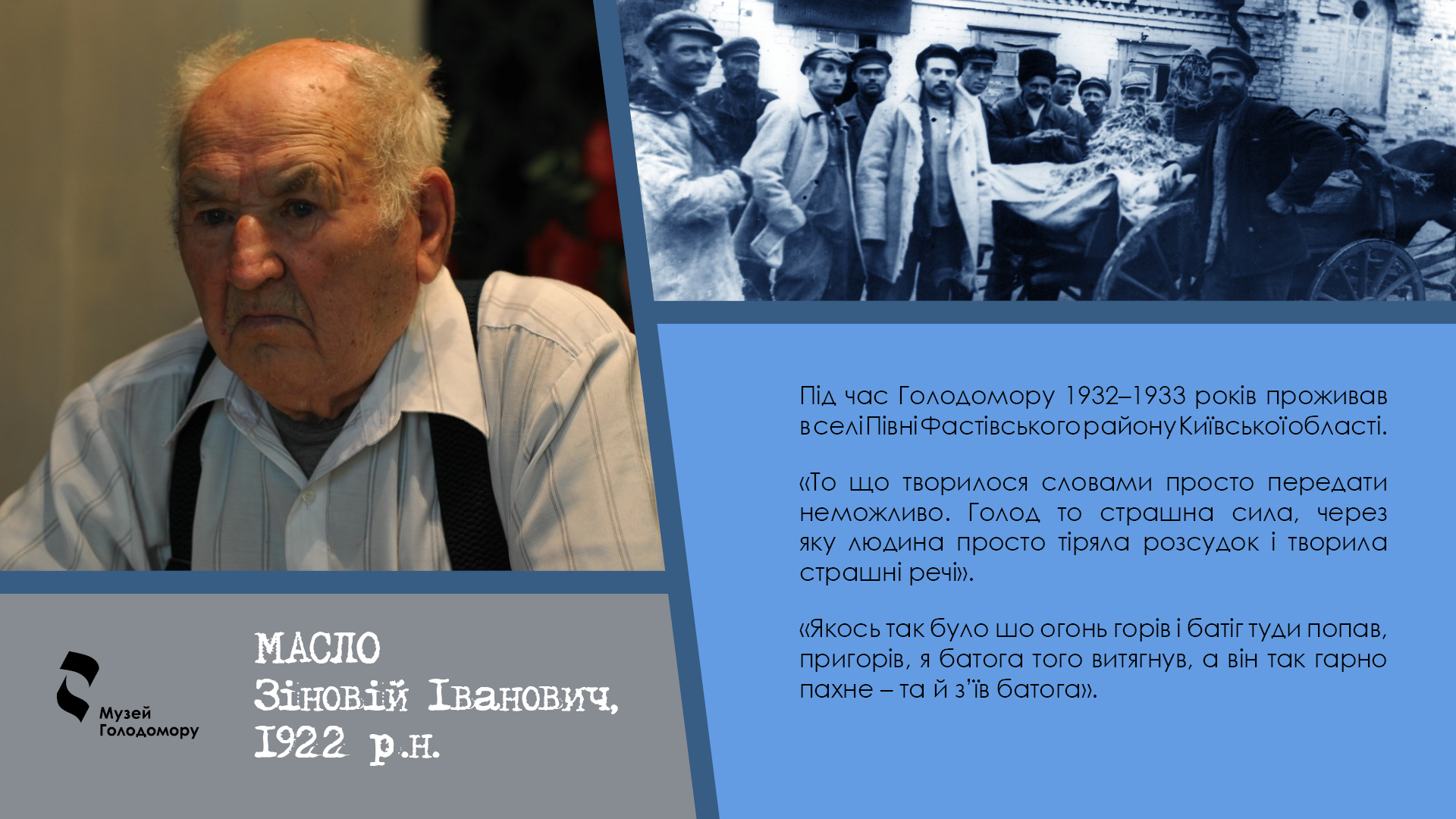 “It is simply impossible to put into words what was happening. Hunger is a terrible force, because of which a person simply lost their mind and did terrible things.”

“Somehow it was so that the fire was burning and the whip got there, burned, I pulled out the whip, and it smelled so good, then I ate the whip.”

“No one was spared. I know one “kulak”. He was taken away and immediately taken to Solovki. They dekulakized him at night, and his old mother was taken to the field, well, three kilometers, maybe four, and dumped there.”

he lived in Kharkiv. 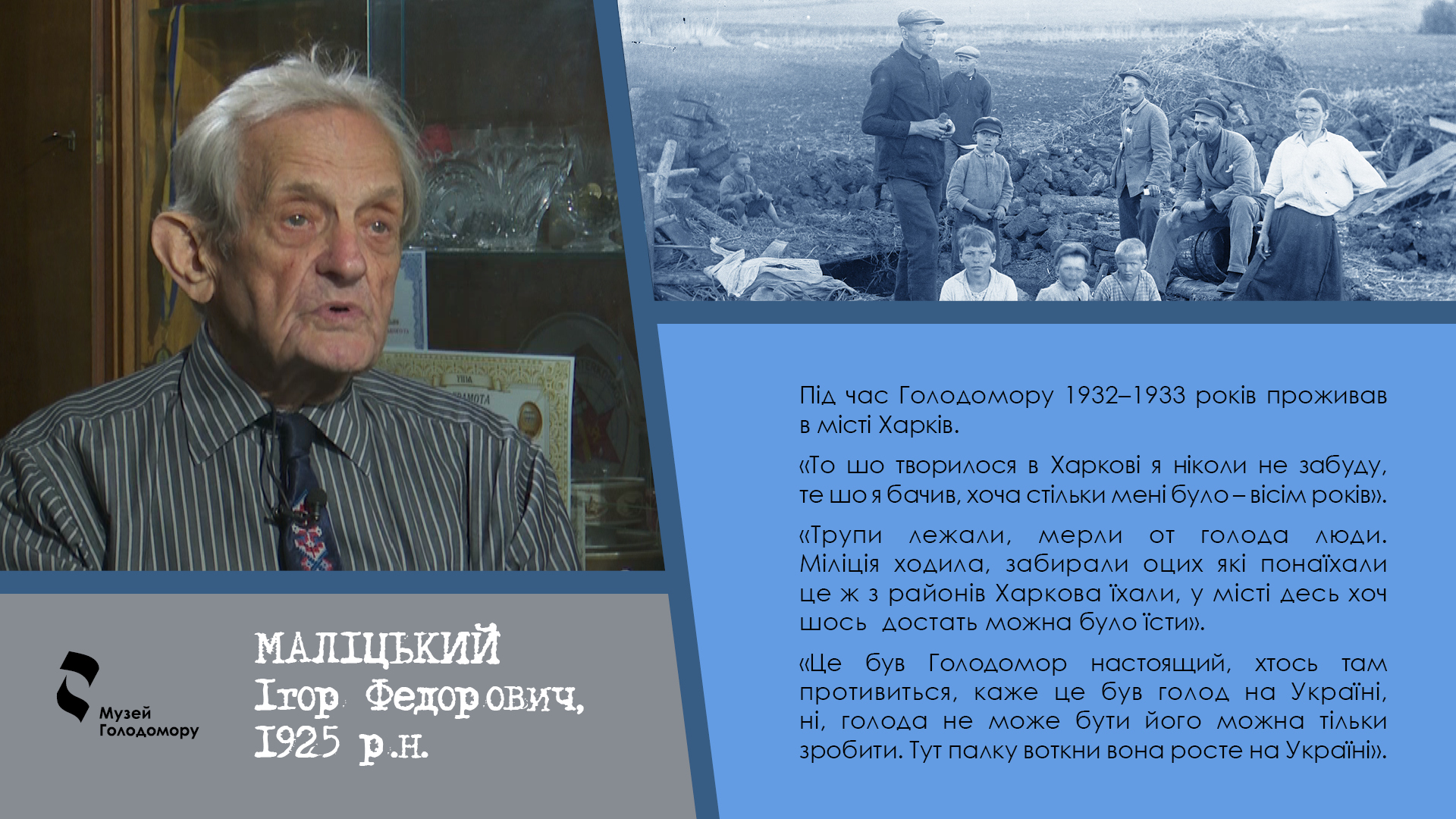 “What was happening in Kharkiv, I will never forget what I saw, although I was so little — eight years old.”

“The corpses were lying, people were dying of hunger. The police went, they took away those who had come here, in large numbers — from the Kharkiv districts, they could eat something in the city somewhere. ”

“It was a real Holodomor, someone is resisting, says it was a famine in Ukraine, no, there can be no natural famine, it can only be organized. Even if you put a stick here — it grows and hervests in Ukraine. ”

he lived in Savyntsi village of Sribne district of Chernihiv region. 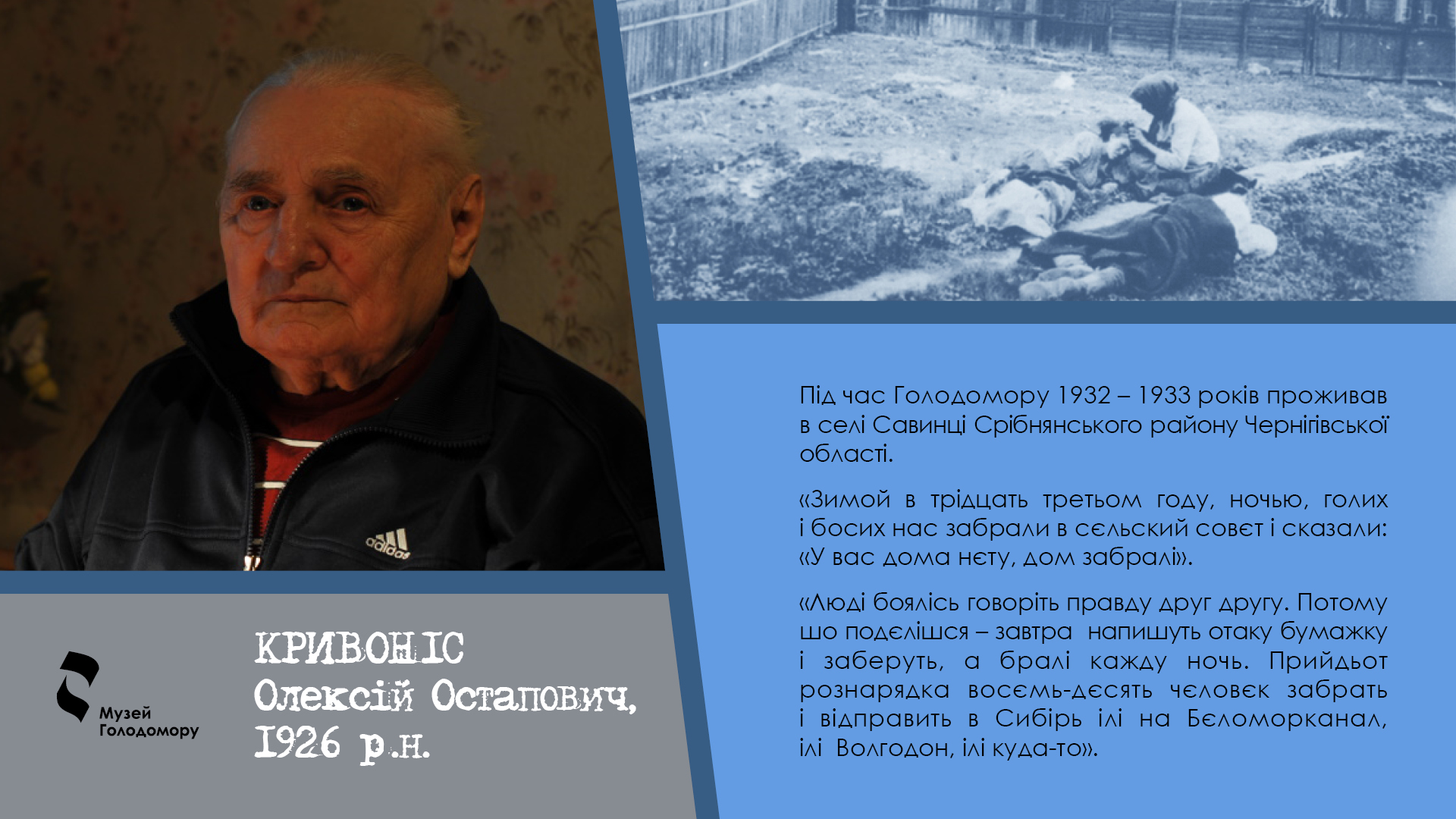 “In the winter of the thirty-third year, at night, naked and barefoot, we were taken to the village council and told, ‘You don’t have a house now.’”

“People were afraid to tell the truth to each other. Because if you share it, tomorrow they will write a piece of paper and take you away, and people were taken every night. There will come an order for eight to ten people to pick up and send to Siberia or to the Belomorkanal, or Volgodon, or somewhere.”

“They watched, when they brought dead horses to the cattle cemetery to bury from the collective farm, people cut the meat, cut it, brought it home, washed the meat, then salted it and ate it …”