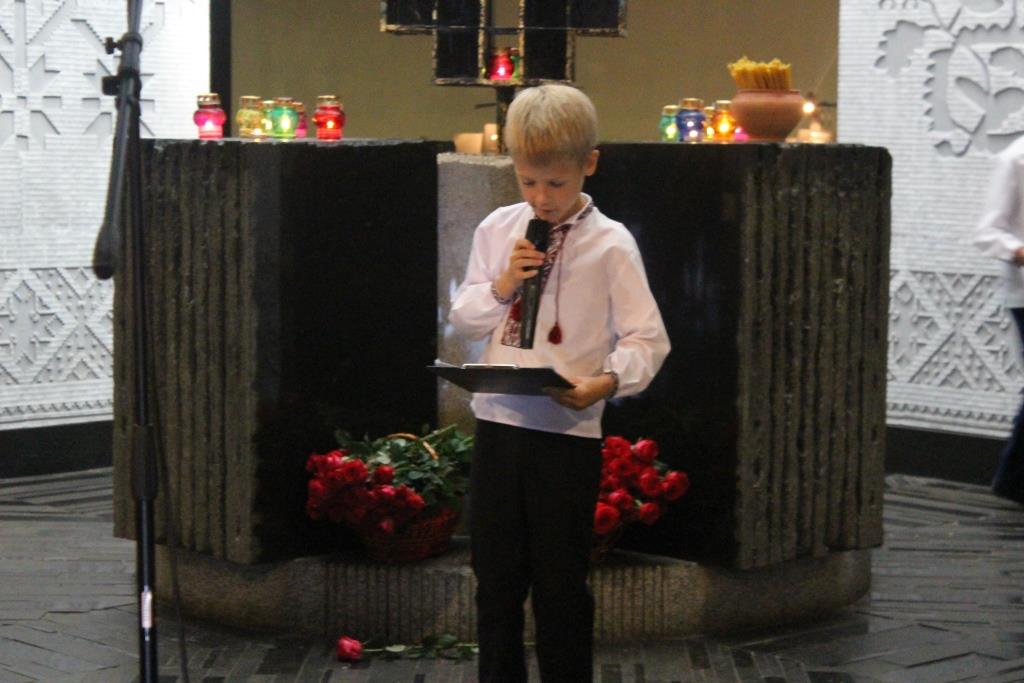 The action «Light a candle of remembrance!» started in the Holodomor Victims Memorial

The International action «Light a candle of remembrance!», dedicated to the 85th anniversary of the Holodomor, started in Ukraine.

In the Hall of Memory of the National Museum «Holodomor Victims Memorial» an international action aimed at uniting Ukrainians from around the world has begun on September 1, 2018. The main purpose of this action is honoring the memory of the victims of the terrible crime in the history of mankind of the twentieth century, and preventing the repetition of such genocides in the future.

Olesia Stasiuk, Director General of the National Museum «Holodomor Victims Memorial», emphasized the importance of holding events for the 85th anniversary of the Holodomor of 1932-1933 to inform the whole world about the crime of the Genocide. Olesia Stasiuk told about the children as the victims of the Holodomor, who suffered the most from the Great Hunger. «This day we decided to devote to children who were killed during the Holodomor and those children who were not born, as well as those who born, lived, survived the Holodomor, but did not have the happy childhood».

Minister of Culture of Ukraine Yevhen Nyschuk emphasized the importance of continuing research on the issue of Holodomor. The Minister paid attention to the fact that hundreds of thousands of children did not go to school because of Golodomor: “This is a tragedy not only for those who perished but also for the number of unborn children. Today, when we talk about the beginning of the school year … How many children did not sit at the desk then?».

The State Secretary of the Ministry of Foreign Affairs of Ukraine Andriy Zayats thanked the museum representatives for their work in researching and informing the public about the Holodomor-Genocide. The representative of the Ministry told about the long-term work of the Ukrainian diaspora, which kept the memory of the Holodomor outside the borders of USSR. Thanks to their efforts, the world knows the true about the genocide of the Ukrainian people.

First Deputy Director of the Ukrainian Institute of National Remembrance, Alina Shpak, emphasized on the symbolism of the first of September as a day in which we should mention the children who suffered and died during the Holodomor. Mrs. Alina Shpak told about the parents who looked at their hungry children and could not do anything.

Director of the Ukrainian World Congress (UWC) Mission to Ukraine Serhiy Kasyanchuk, on behalf of the President of the UWC, Eugene Czolij and Stefan Romaniv, chairman of the committee on the recognition of the Holodomor as a genocide against the Ukrainian people, thanked the Museum’s Administration, the Ministry of Foreign Affairs of Ukraine, the Ukrainian Institute of National Remembrance for cooperation in the process of spreading the truth about the Holodomor. Serhiy Kasyanchuk invited the Ukrainians from all over the world to join the action «Light a candle of remembrance!».

Professor of the Taras Shevchenko National University of Kyiv, Doctor of Historical Sciences, Volodymyr Sergiychuk, emphasized the importance of working with archival documents, which reveals more and more facts about the Holodomor.

Deputy Chairman of the All-Ukrainian Human Rights Protection Organization «Memorial»  Yuriy Balanyuk emphasized on the work of the «Memorial» almost 30 years on the spreading of the truth about the Holodomor and further work in this direction.

Mykola Kocherga, president of the Ukrainian Holodomor–Genocide Foundation (Chicago, USA) talked about the active work of Ukrainians in the United States in order to spread the information about the Holodomor-Genocide and thanked for a study on the Holodomor in Ukraine that reveals new details of the genocide.

Children also took part in the memorable action, they read the names of 85 children who perished during the Holodomor-Genocide. After that, all participants lighted the candles for honoring the victims. The priests of the UGCC and the UOC-KP served Panakhyda (solemn memorial liturgical service) for innocent people killed during the Holodomor-Genocide The participants put flowers on the sculpture the «Bitter memory of childhood» and visited the museum exhibition «Stolen Childhood: Children in the Years of the Holodomor (1932-1933)».

During the memorable action photo-documentary exhibition «Stolen Childhood: Children in the Years of the Holodomor (1932-1933)» was presented. The exhibition tells us about the life and survival of children in the cities and in the villages during the Holodomor (1932-1933). The children were the most vulnerable part of the Ukrainian national group, They were the victims of the crime of genocide organized by the communist regime. According to various views of historians, from 1,5 to 4 million children died during the Holodomor. The survivors grew and, after decades, told the descendants of the crime of genocide, they are in the unofficial and unrecognized status of the «victims of the Holodomor». The part of them grew up in orphanages or in the new families, they will never know where their family roots came from.

On September 2, the action «Light a candle of remembrance!» will continue in Turkey. The action will take place at 11:30 am in the Catholic Church of the Virgin Mary, Birlik Mah. 428.cd No: 35, Vatican Embassy.

You can use the website of «85th anniversary of the Holodomor» in order to find out the new information about the memorial actions.