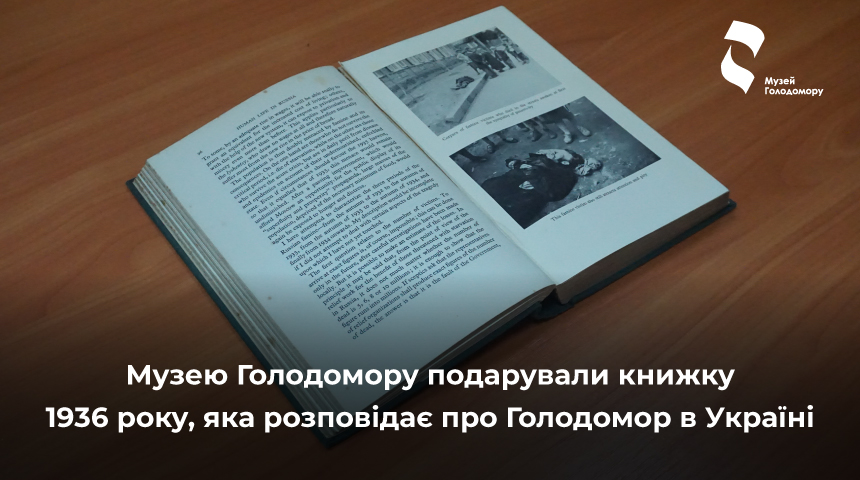 The Holodomor Museum was gifted with a book from 1936, which tells about the Holodomor in Ukraine

The funds of the Holodomor Museum were replenished with a unique publication – the book Human Life in Russia (1936) by the publicist of German origin, Ewald Ammende. It is the English version of Dr Ammende’s German work Muss Russland hungern? (“Should Russia starve?”, 1935), which was published a year after the German-language edition. We would like to emphasize that the entire USSR was called “Russia” then, and the story itself refers to Ukraine and the Kuban.

Until recently, it was believed that it was in this book that the photographs of the Austrian engineer Alexander Wienerberger, taken by him in Kharkiv in the summer of 1933, i.e. at the height of the Holodomor, were first published. However, during the latest research by Ukrainian scientists,  it turned out that Wienerberger’s photos were published in publications of the Ukrainian diaspora in Winnipeg at the end of 1934.

For security reasons, the author of the photographs is not indicated in the publication, although Ammende devotes an entire paragraph in his preface to explaining whom and how these photographs were taken, and he assures that they are authentic.

The book Human Life in Russia was found on foreign online sites and purchased by philanthropist Andrii Kravchenko. We will remind you that in December last year, he donated to our Museum a unique edition of Alexander Wienerberger’s memoirs Hart auf hart. 15 Jahre Ingenieur in Sowjetrussland (“Fateful times. 15 years of an engineer in Soviet Russia”). We are extremely thankful!

Why is the English-language version of the book “Should Russia starve?” interesting for researchers? Not only the story about the Holodomor by Dr Ammende, who in 1933 headed the interfaith committee to help the starving in the USSR. Moreover, for instance, it was the first time an attempt was made… to falsify photo evidence of the Holodomor. About this during the public conversation “How did the secret photos of the Holodomor become the most valuable exhibit?” historian Oksana Yurkova (@oksana.yurkova) told in November last year.

While the English edition was being prepared, in addition to Alexander Wienerberger’s photos, Dr F. Dittloff, “a long-time director of the German government agricultural concession Drusag in the North Caucasus” offered his photos – as Ammende himself introduced him in his introduction. As Dittloff assured the author, he personally took those pictures in the summer of 1933.

“In fact, Dr Dittloff told a lie because the English edition, which wWhile the English edition was being prepared, in addition to Alexander Wienerberger’s photo, Dr F. Dittloff, “a long-time director of the German government agricultural concession Drusag in the North Caucasus” offered his photos, as Ammende himself introduced him in his introduction. As much more widespread than the German one, contained photos taken in Soviet Russia in 1921-1922 by a photographer of the Nansen mission, says Oksana Yurkova. — These are well-known photos that do not relate to the Holodomor period of 1932-1933 because they were distributed in 1921-1922 to collect money for the starving people of the Volga region and the North Caucasus. I do not know who was the initiator of such confusion and the inclusion of these photos in the book because, at the time of the publication of the English edition, Dr Ammende died suddenly (at the age of 43. — ed.). And perhaps, it had already been done without his knowledge. However, it was this publication that went out into the world and spread these false photos, which were later used against us. As if you take a photo and say that it was taken in Ukraine in 1933, but in fact, it is not, then you are lying about the Holodomor. And this has repeatedly played into the hands of those who still continue to deny the Holodomor in Ukraine.”