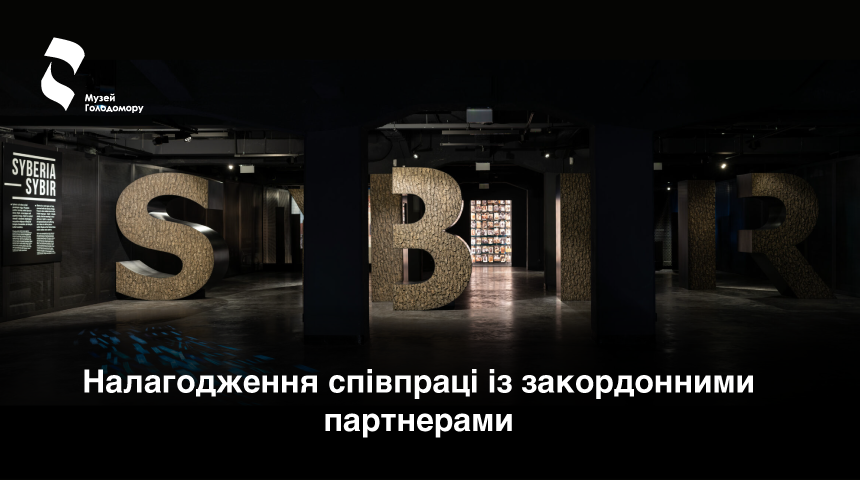 The Holodomor Museum will cooperate with colleagues from Poland, Latvia, Lithuania and Estonia to spread the truth about Soviet crimes

On Monday, December 12, in Białystok (Poland), a meeting of the museums’ representatives, which talked about the crimes of the communist regime in Eastern Europe, took place. The Polish Sybir Memorial Museum in Białystok, an institution that tells the story of the deportations of Poles to the East, which were started by the Russian tsarist government, and then continued on a larger scale by the Soviet regime, proposed this idea of cooperation.

Museum institutions have declared their readiness to cooperate at the international level in spreading knowledge about communist repression directed against citizens of countries that were under Soviet occupation. Cooperation involves the exchange of research and museum experience, as well as the prospect of joint future scientific projects and publications. Cooperation will also concern cultural projects related to the popularization of historical knowledge with an emphasis on the history of Central and Eastern Europe during the communist period.

In her speech, the Acting General Director of the National Museum of the Holodomor-Genocide, Lesia Hasydzhak, who joined the meeting online, thanked her colleagues for this idea of unifying the museums. After all, the world still knows very little about the crimes of the communist Soviet regime.

At the same time, she spoke about the work of the Holodomor Museum and its staff in wartime conditions. “The war affected the lives of all of us. At a time when Russian troops were stationed 20 kilometres from Kyiv, we, like hundreds of our colleagues, had to hide our exhibits in warehouses, and they remain there to this day. And here I want to thank all of you who have been helping us since February until today by sending one truck after another to Ukraine with means of protecting museum collections, generators and dehumidifiers, boxes and everything else. I don’t even want to imagine what would have happened without your support, and I sincerely wish the war would never come to your countries.”– Lesia Hasydzhak said.

She added that the second stage of construction of the Holodomor Museum is currently underway, the opening of which was planned for the 90th anniversary of the Holodomor in 2023. “But despite the war, we, both museum workers and the Ukrainian authorities are doing everything so that in November 2023, the second phase of the museum will receive its first visitors. After all, the Holodomor Museum is today the main museum of Ukraine. The war and the crimes of the Russians in Ukraine encourage people to be interested in our history, to draw parallels, and to talk about the repetition of crimes because the criminal – Russia – was not punished. Before 24th February we had thought that it was the time when it was necessary to honour and build a museum where the Holodomor was told as a long-lived genocide with its consequences overcome. But this phase of the war, has shown that this is not the case. We are all witnesses of how Russia is committing a new genocide in Ukraine. And therefore, just as with faith in victory, our military fights for every square metre of Ukrainian land, with the same faith, we are sure that a tribunal is waiting for Russia, which it avoided before, not answering for millions of deported, starving Ukrainian farmers, thousands shot Ukrainian priests and cultural figures, for all the troubles and suffering brought to the Polish, Lithuanian, Estonian, and Latvian peoples.” Lesia Hasydzhak emphasized.

The event participants talked about the peculiarities of the work of their museums. In their speeches, they also noted that each of the countries represented by these museum institutions had their own experience of crimes and oppression committed by the communist totalitarian regime against their citizens. And precisely because Russia, as the legal successor of the USSR, did not recognize and condemn these crimes, today, the world is witnessing a new act of aggression by Moscow. Each of these countries has a clear awareness: if evil is not stopped now in Ukraine, they will be next. That is why, today, it is crucial to spread historical knowledge about the crimes of the past, the consequences of which were the crimes of today.

At the same time, the Holodomor Museum, represented by Acting general director Lesia Hasydzhak made the first proposal to her colleagues: to prepare a joint international exhibition about the crimes of the communist regime for young people. The idea of such an exhibition appeared during a meeting with a Croatian public figure, the director of international relations of the NGO “Institute for Democracy”, Kristijan Lepesic. European audiences today need such information to emphasize the threats posed by totalitarian and authoritarian regimes. And if the older generation remembers it well, the youth, who were born in other times, know little about that period and the crimes committed in the Soviet era.