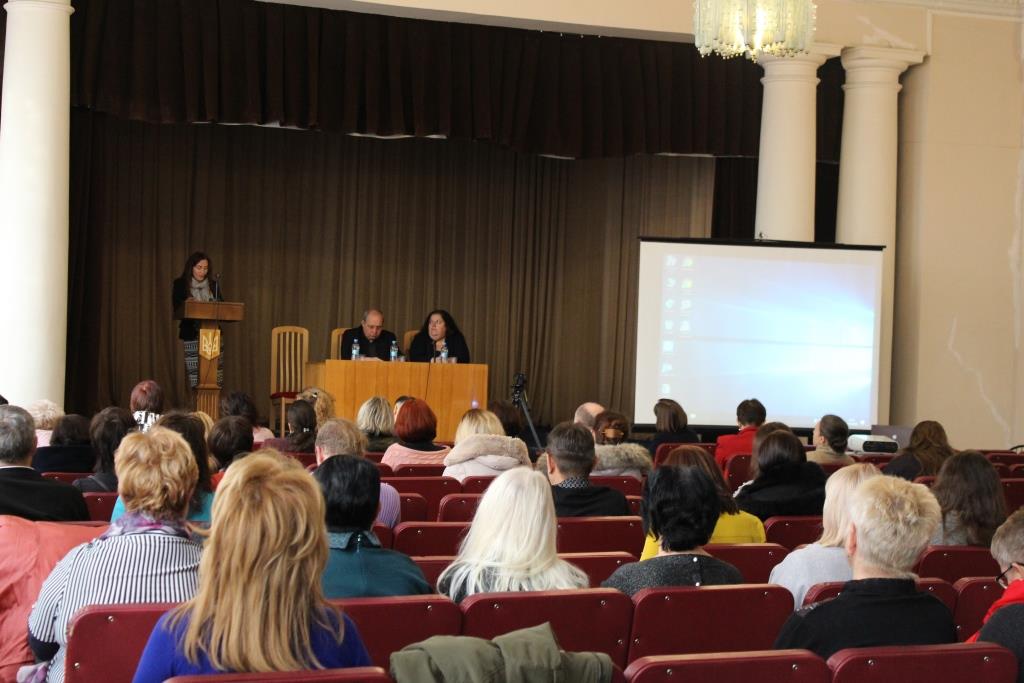 On November 19, 2018, the National Museum “Holodomor Victims Memorial”, together with the Ministry of Education and Science of Ukraine, conducted a training workshop on the topic “Study of  Holodomor-Genocide in Educational Institutions. Forms and means of training organization”. About 100 school principals, their deputies and history teachers from Kyiv and other regions of Ukraine took part in it.

The issue of cooperation between the museum and Ukrainian schools is not new, since the practical application of the newest methods and forms of work in the format “school – museum” gives good results in the process of formation of knowledge and skills of schoolchildren. In the museums of Ukraine, the position of “museum teacher” has been successfully introduced. The teachers often treat museum workers as colleagues, who can teach the students and youth. The analysis of school history of Ukraine curricula makes it possible to talk about the lack of hours devoted to study the topic of Holodomor-genocide. Also, the teachers themselves often perceive the issue of genocide of the Ukrainian nation from the point of view of the story about an unpleasant and terrible historical past, forgetting that, first of all, knowledge of the history of the Holodomor, its causes and consequences, will allow current students, in the future, those who will build democracy in Ukraine and the world, be able to recognize the manifestations of genocide and prevent its recurrence in the future.

Another reason for holding the workshop was that the museum is primarily a research institution whose staff conducts research, as well as accumulates leading scholars who study the history of Holodomor, publishes research works, and is an intermediary between academic science and school. Today, with the gradual opening of archives and access to secret information, it became possible to study deeply the causes, scale and mechanism of Holodomor-genocide. And all those results should be accessible to educators. After all, even a brief acquaintance with the difficult period of the 1930s gives answers to many of contemporary issues. The pressure of the totalitarian regime, the terror by hunger, led to massive demographic losses. An in-depth study of Holodomor-genocide will provide a basis for understanding the modern mentality of Ukrainians. It will help to realize that the destroying of Ukrainian traditions and the humiliation of the people lasted for decades.

Pavlo Khobzei, Deputy Minister of Education and Science of Ukraine, addressed the participants of the seminar with a welcoming speech. He noted that the in-depth study of the topic of Holodomor-genocide at school is extremely important today.

Olesia Stasiuk, Director General of National Museum “Holodomor Victims Memorial”, emphasized that the Holodomor Victims Memorial works in order to be side-by-side with teachers in a difficult case of presenting the history of Holodomor at school. She talked about different directions of the museum: from integrated tours to master classes for the youngest, to interactive lessons for senior students, in which they can develop their logical thinking, try to play different roles and make their own conclusions. Olesia Stasiuk noted that even today, some directors of schools or teachers try to avoid Holodomor issue on lessons, considering it to be negative, unhappy and invincible. What is really wrong is that the denial of Holodomor is today part of the informational hybrid war that Russia is leading in Ukraine, and knowledge about Holodomor is a weapon due to which Ukraine is writing a new page of its victorious history.

The head of the All-Ukrainian Association of Holodomor Researchers, a leading researcher at the Institute of History of Ukraine of the National Academy of Sciences of Ukraine, Doctor of Historical Sciences Vasyl Marochko detailed the demographic losses of Ukrainians, since this question is often asked to the museum staff by tourists. He showed many examples of silence and destruction of data that are the evidence of the enormous number of victims of Holodomor-Genocide. Vasyl Marochko also presented his new work – “The Encyclopedia of Holodomor”. The researcher has been working on it for over 7 years.

Head of the Center for International Human Rights Protection, Associate Professor of the Department of International and European Law of the Faculty of Law of National University of Kyiv-Mohyla Academy, Doctor of Law Myroslava Antonovych spoke to educators about the documents and evidence base which they can use in the educational process. She emphasized that according to the Law of Ukraine and the International Convention on the Crime of Genocide and its Prevention, Holodomor of 1932-1933 in Ukraine is the genocide of Ukrainian nation. She explained in detail each of the features that characterize genocide as a crime.

The Senior Collections Specialist of National Museum “Holodomor Victims Memorial”, Honored Worker of Culture of Ukraine Nina Lapchynska presented a popular science publication “33 Questions and Answers on Holodomor-Genocide”, which, before the 85th anniversary of the Holodomor, was prepared by National Museum ” Holodomor Victims Memorial”. The content of the publication is based on the questions most often asked by museum visitors. The book will be useful to teachers of history and ordinary citizens who are interested in the history of Ukraine. By the way, all educators, applying to the museum with an official letter to the address: 01601 Lavrska Str. 3, Kyiv, or by e-mail: [email protected], will be able to receive it for free.

In the second part of the scientific and practical seminar, educators from Kyiv, Dnipro and Horodyshche also shared with their colleagues their experience of attracting media education technologies and the latest interactive forms and methods of teaching as a means of forming the basic competencies of students during the study of Holodomor during history lessons and in extracurricular educational work. In particular, Yurii Haiduchenko, Olena Burlaka and Natalia Vlasova presented their works.

After the seminar, teachers were able to visit the National Museum “Holodomor Victims Memorial”, to listen to the tour and to communicate with museum scholars.