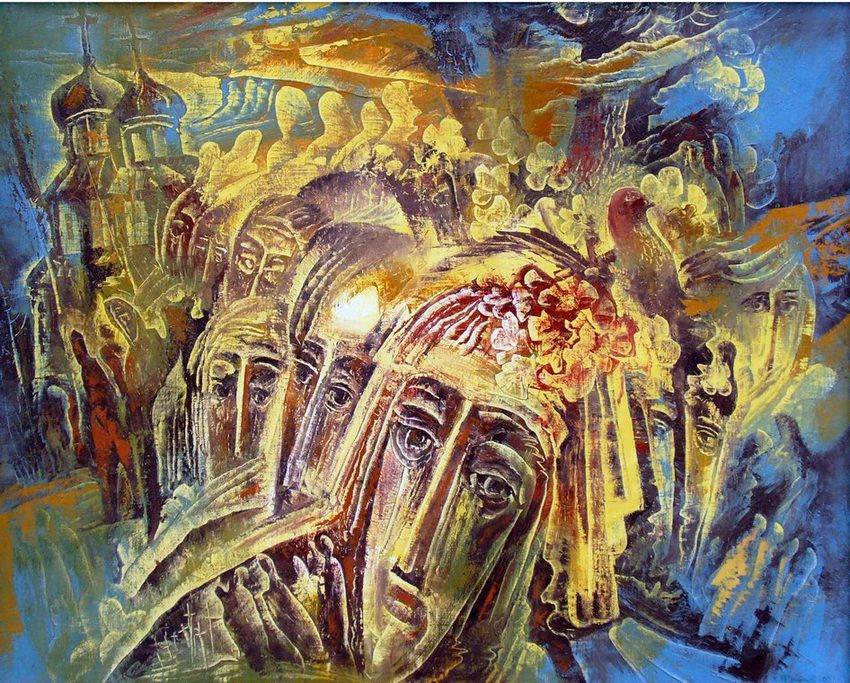 Abstract. The article analyzes the policy of the communist regime aimed at destroying the traditional moral values of Ukrainians during the mass artificial famine of 1921–1923. It characterizes the destruction of the moral foundations of Ukrainian society under the influence of mass man-made famine and occupation of communist ideology.

The Bolshevik occupation regime launched a targeted attack on all family values. They promoted atheism. The church was seen as a competitor of the new government, so the Bolsheviks resorted to discrediting the church and God in the eyes of Ukrainians. Baptism was criticized (although during the entire communist occupation, Ukrainians were baptized almost secretly). Even metrics were replaced by impersonal forms. However, during the mass man-made famine of 1921–1923, so-called “red baptisms” were practised in the cities of Ukraine. Members of women’s departments arranged a strange ritual in non-residential premises: parents of newborns publicly declared that they did not recognize the church and asked to baptized (emphasis ours. – Author) their baby. [1] Here we can trace the adaptation of Bolshevik propaganda to the tradition of baptism, which could not be eradicated from the consciousness of Ukrainians).

In 1921–1923, Ukrainian provinces were affected by mass man-made famine. However, the communist regime did not stop taking out bread and food for the starving Volga region. They regularly organized collections of food and money for the benefit of the starving provinces of the RSFSR. There were systemic extortions and additional taxes in favour of the starving people of the North. The Zaporizhzhia Provincial Executive Committee issued an instruction on additional taxation of theatre tickets. The additional collection was to be transferred to the fund for the starving. In addition to financial innovations, theatregoers expected conceptual innovations: it was recommended to give performances of the revolutionary repertoire, which was subject to approval. For example, the opening of the new Central Workers’ Club in Zaporizhzhia began with a group performance of “The International” and continued with the theatrical performance “The Power of Darkness” [2]. The repertoire of the Zaporizhzhia Theatre named after Lenin, had a constantly performed play, “From Old to New”. [3] However, not only the theatre was subject to the so-called communist renewal but also literature, visual arts, and spiritual life. Rallies that lasted 3-4 hours accompanied even children’s holidays, and on state celebrations (for example, on November 7), hungry children had to attend children’s conferences [4] and put on performances for party officials [5] on their own. Celebrations for adults strike in their cynicism: hungry and exhausted people had to participate in the night torchlight procession.

The communist regime did not only cynically destroy traditional values, replacing them with new, ideologized stereotypes. According to Volodymyr Korolenko’s memories, the celebration of the new year 1921 in the “new” style was accompanied by a specific performance. In the middle of the celebration, 20 Red Army men burst into a crowded room where there were women and children, grabbed a participant in the event, dragged him to the stage and started preparing for the execution. Panic began in the hall: women screamed, and children were frightened. In the end, it turned out to be a joke: they said they were shooting the “old” year, and a sailor jumped out from under the rags, symbolizing the “new” year. [6] The cruelty of communist jokes was incomprehensible and unacceptable to Ukrainians.

The most powerful mental changes affected children. A resident of the Zaporizhzhia region recalled: “The Holodomor was in 1921. I was only four years old. A child at that age does not remember anything. I only remember that… – fright. That’s what I remembered. In our family, there was still something at least for some korzhyky (a type of bread or baked product that has a flat shape and is made from dough). Somehow the mother baked those korzhyky and put them didn’t cover. And my father and my uncle (that is, brothers) shared a house between them. And we got the kitchen, and my uncle got a big house. So my mother baked cakes and went to my aunt. “Son, this is what I remembered – look, don’t let anyone in!” And the latch was so low – it’s not in the stable, but right in the house. My mother just left, and my uncle looked in and showed me a knife, or so it seemed to me. I saw that the mother (due to negligence) did not cover the cakes. And the man was hungry… “Open!” And I said, “I won’t open it because my mother said so.” – “Open it because I will kill you.” And so, out of fright, I opened it. Ran into the house. By the time my mother came (it was in one yard), there had been no cakes, nothing. And that’s how I remembered it. And so I don’t remember anything more about that year” [7].

As N. Polonska-Vasylenko recalled, 1921–1923 was a period of the “terrible decline of the human soul.” The professor annotated in her memoirs: “Outstanding scientists and public figures had to focus their attention on the miserable vegetation. Gossip spread. The level of interest decreased to the level of interest in bazaar bargains, and it was very difficult to find a person who could stoically endure the horror of life and preserve the need for the spiritual” [8].

People’s psychology changed: many Ukrainians had to humiliate themselves in order to receive pitiful food, some had to lose their moral face and resort to theft, and anger and hatred towards people intensified. According to the doctors’ studies, hunger gives rise to bitterness, greed, cruelty, misanthropy, and immorality. Hunger can activate a person’s atavistic instincts.

The most affected by the mass man-made famine were children who suffered from a lack of food and starved, and some of them passed away. Those who remained alive had undermined health and a broken psyche. Ukrainian society transformed its identity after the mass man-made famine of 1921–1923. However, the final loss of national origins occurred during the Holodomor genocide of 1932–1933.

[5] Lyakh S.R. “Zharkoye” on the fifth anniversary of the October Revolution: details of military and political life in Zaporizhzhia in 1922. Scientific works of the Faculty of History of Zaporizhzhia State University. Vol. XX. Zaporizhzhia: ZNU, 2006. P. 178–183.

of the National Museum of the Holodomor-Genocide,

of the National Museum of the Holodomor-Genocide