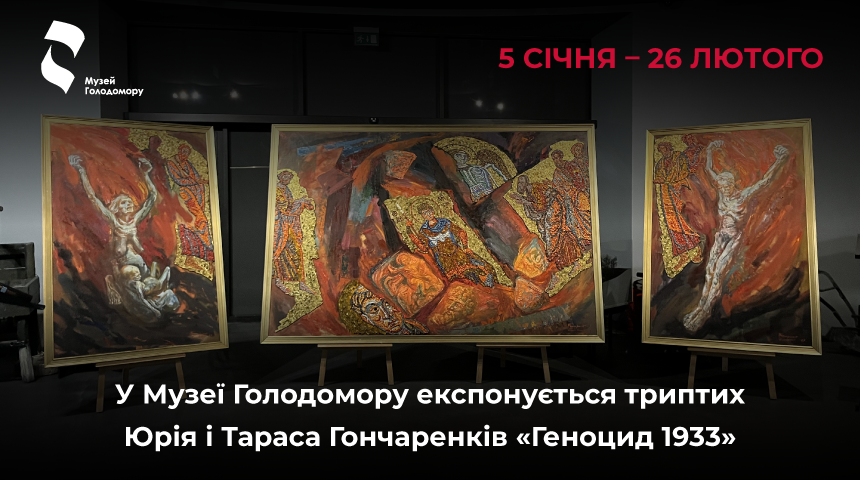 From today, January 5, the triptych “Genocide 1933” by Ukrainian artists Yurii and Taras Honcharenko is on display in the Hall of Memory of the Holodomor Museum. The picture was created in 1989 when the truth about the Holodomor began to appear. “We dedicate it to the memory of the victims of the 1930s in Ukraine,” the authors wrote on the back of their canvas.

The picture is made in an interesting technique that combines painting and mosaic. This made it possible to make the image voluminous so that it spoke in different ways under the influence of light. 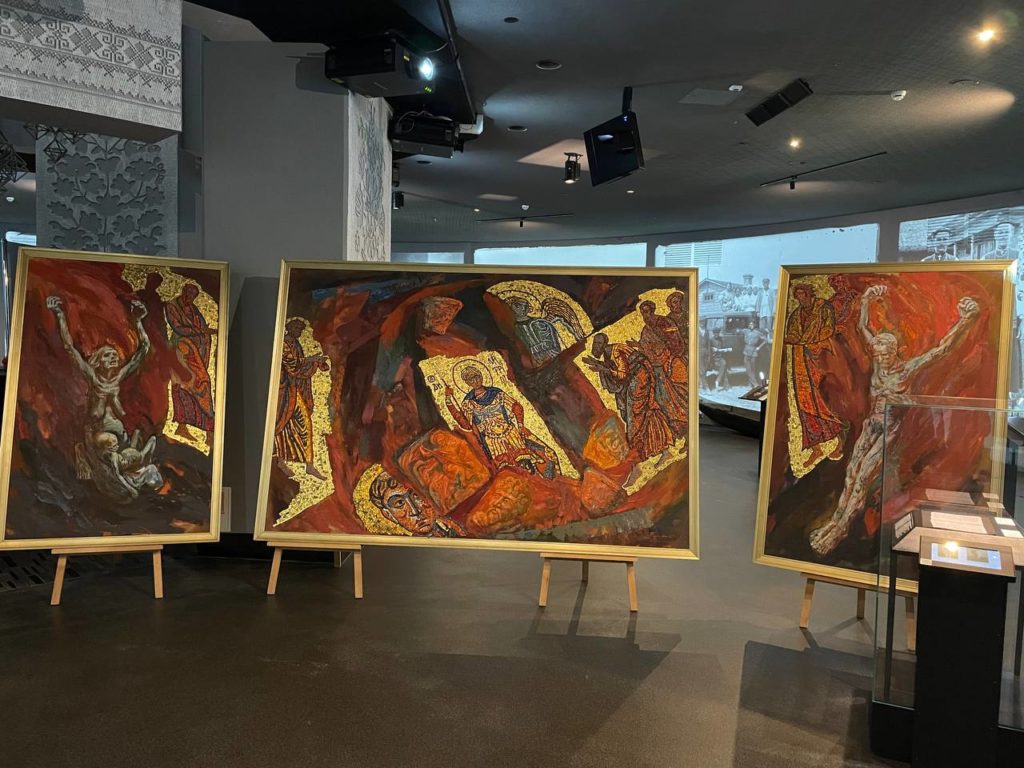 In the centre of the composition are the crushed mosaics of St. Michael’s Golden-Domed Cathedral. On the left and right sides are images of people emaciated by hunger: a man whose body seems to be chained to a crucifix, and an exhausted woman holding a swollen child in her arms. They desperately raise their hands to the sky, begging for salvation. Because here, where the holy places are desecrated, it is a real hell – people starve to death of their kind. Until recently, the fertile land became a cursed place…

At the time when the triptych was created, Michael’s Golden Dome had not yet been restored. And this also has a certain symbolism – the cathedral stands today, and next to it is the first monument to the Holodomor victims in Kyiv. We rebuilt our shrines and reclaimed the memory they tried to rob us of for decades. But we continue to investigate and understand the tragedy of the Holodomor genocide. By the way, Taras and Yurii Honcharenko called their work “Genocide 1933” then, in 1989, they were still timidly beginning to talk about such a qualification of the events of 1932-1933. Today, Ukraine and 19 other countries recognize the Holodomor as genocide. So the name also turned out to be prophetic.

Yurii Honcharenko (born in 1964) and Taras Honcharenko (born in 1962) are well-known Kyiv artists who were born into the artistic family of Svitlana Bondarenko and Yevhen Honcharenko. They combine various techniques in their works. Thanks to this, their canvases are characterized by rich colours, a variety of textures, an original shape, etc. Artists work in the fields of monumental and easel painting, as well as graphics. The brothers worked on the triptych “Genocide 1933” for two years.

It is worth mentioning that the painting was transferred to the Holodomor Museum in November 2022 by the Association of Charities of Ukraine on behalf of the American collector Morgan Williams, the owner of the largest private art collection, which includes works on the theme of the Holodomor.

The triptych “Genocide 1933” can be viewed in the exposition of our museum until February 26.