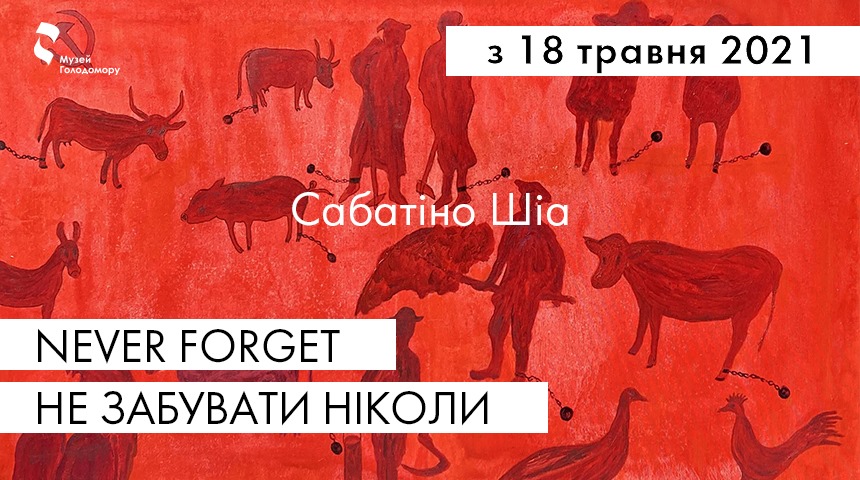 On May 18, 2021, the Holodomor Museum presented the art exhibition “Never Forget”, created by the famous Italian artist Sabbatino Shia.

Sabbatino Scia is an Italian writer and artist who works with fairy tales and fables and through them presents difficult traumatic topics for adults and children. In recent years, he has become interested in the history of the Holodomor, the genocide of Ukrainians that killed millions of Ukrainians in 1932–1933.

Olesia Stasiuk, Director General of the National Museum of the Holodomor Genocide: “We are sincerely grateful to all artists, public figures and writers who rethink, remind, speak in Ukraine and abroad about the Holodomor and mass artificial famines. We are grateful to Sabbatino, who has become a true friend of our Museum over the years of cooperation and support. “ 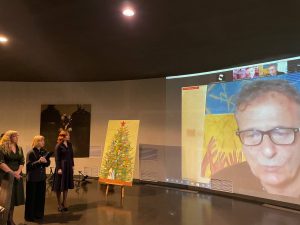 Sabbatino Scia, Italian artist and author of a series of paintings about the Holodomor, said, “I love history very much. I always tried to understand who we are, where our ancestors came from, what we had done good or bad. The first genocides took place thousands of years ago. I learned about the Holodomor in the late 1980s when I was presented with Robert Conquest’s Harvest of Sorrow. I have always felt the value of historical memory and ethics in my work. I believe that the complex truth should be told with the help of art, because it has a huge communicative power. “

Maksym Kovalenko, Consul General of Ukraine in Naples, said, “It is extremely important for us that the Italian community has joined in spreading the truth about the Holodomor, about these tragic pages of Ukrainian history.”

The event was moderated by Iryna Kurhanska, curator of the exhibition. 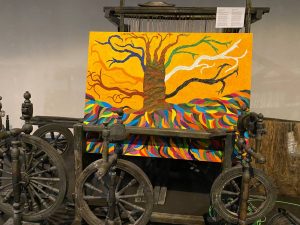 On September 18, 2018, the first five works of Sabbatino Scia were included in the collection of the Holodomor Museum in Kyiv. Thanks to the support of Maksym Kovalenko, Consul General of Ukraine in Naples, this year 16 more paintings have become the property of the Museum. In total, the artist plans to write a series of 50 paintings and a novel.

Red cows in handcuffs as hostages of crazy politics; Green Jesus as a symbol of ruined villages and hungry farmers at the foot of his crucifixion; brown, black and green animals that became ghosts on earth, which was a symbol of wealth and fertility; snakes as evil spirits and demons without a drop of pity are the symbols used by the artist. 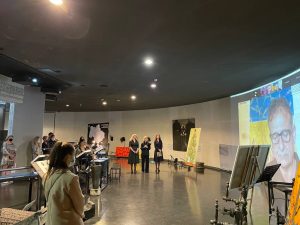 The themes of the artist’s paintings are collectivization, dekulakization, mass mortality and graves during the Holodomor, the figure of the dictator and criminal Joseph Stalin, and the general conditions of human existence in a totalitarian society such as the Soviet Union.

In particular, the painting Communist Christmas Tree is dedicated to the destruction of Ukrainian holiday traditions. Christmas carols became “red”, Easter and Christmas were Komsomol, “October” and “stars” celebrations replaced baptisms, and so on. The Christmas tree was first banned and later returned to ideology. However, instead of traditional nuts, apples, cookies, etc., it was decorated with attributes of Soviet propaganda, such as stars, portraits of Lenin, pioneers, flags. 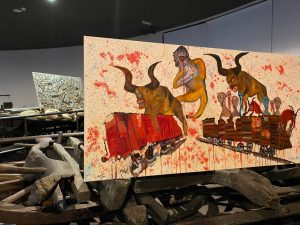 Another painting is called Dictator Joseph Stalin—the Organizer of the Genocide. When Stalin died, 800 people died in the crowd that was going to see the hearse with his coffin, so it is said that he sowed death even when he was dead. Few people in the world understood who Stalin was, and even less knew about the genocide he created. In Italy, the figure of the dictator was also unclear. Ironically, even in Naples, Sabbatino Scia’s hometown, people cried in the streets after the death of a Soviet tyrant. However, in the 1930s, Italian diplomats dared to tell the world the truth about Stalin’s crimes. The Italian consul in Kharkov, Sergio Gradenigo, was one of the first to tell the West how the communist regime starved millions of Ukrainians to death.

The paintings are exhibited together with household items of Ukrainians of the 1930s in the Museum’s Hall of Memory. In this way, visitors will be able to learn history on two levels: sensual (with the help of bright and accurate paintings by Sabatino) and rational (with the help of exhibits, audio guides in Italian and historical signatures).