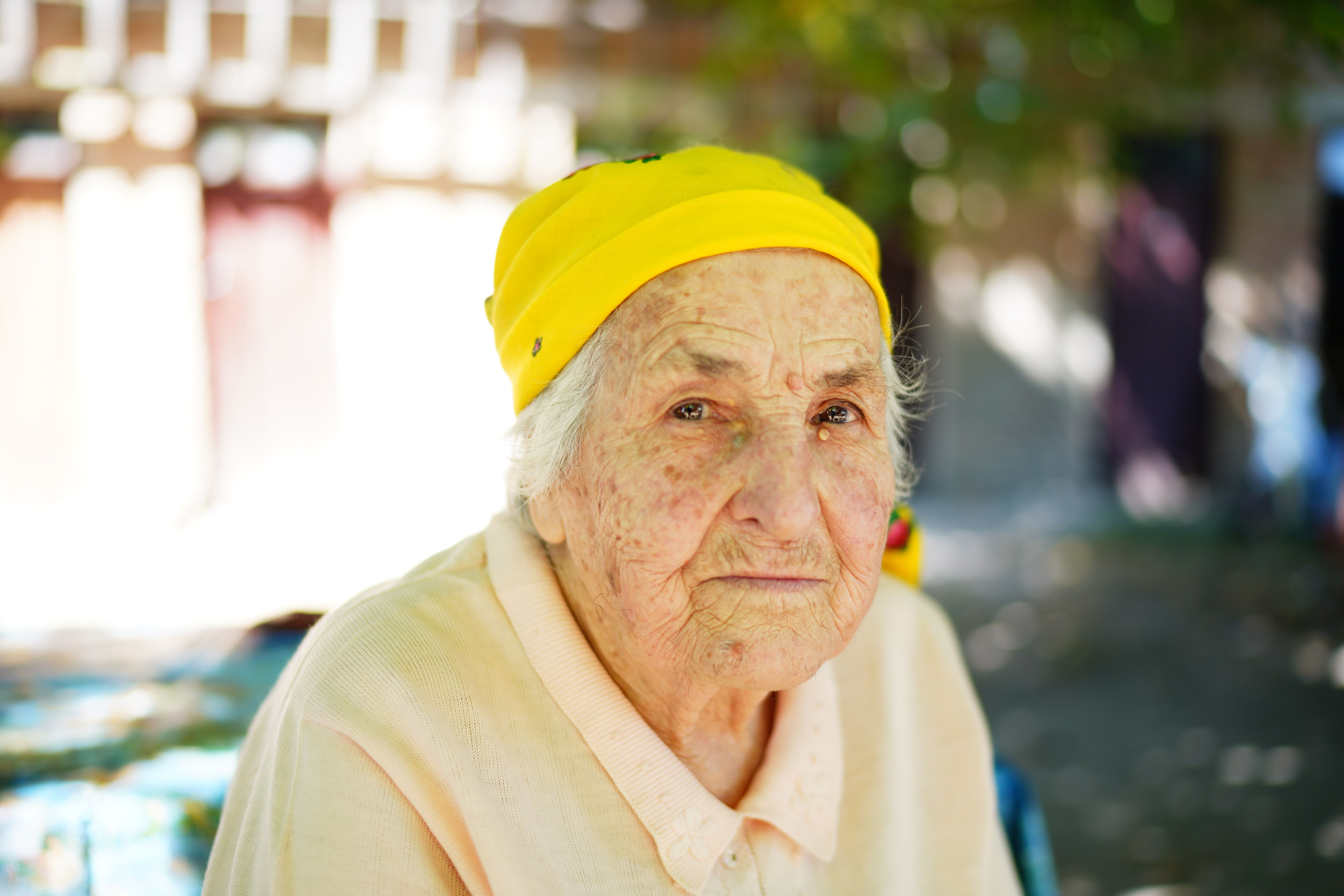 They Were Saved by a Head of Collective Farm: The Story of Tetiana Krotova

This amazing story about the humanity of the authorities representative, who saved the whole village from death, was recorded by the Holodomor Museum together with the NGO “Ukrainer” in the village of Oleksandrivka, Kirovohrad region. The expedition took place within the project “Holodomor: Mosaics of History” with the support of the Ukrainian Cultural Foundation.

When she was less than five years, Tetiana Ivanivna Krotova experienced  all the horrors of the Holodomor. She saw with her own eyes the dekulakization of the villagers, ate whole grains of wheat, fearing that she would be exposed. Her parents moved from place to place, working everywhere on local collective farms to somehow feed their five children. As an adult, Tetiana continued to learn from the stories of neighbors the terrible truth about the events of her childhood, which are known in the history of Ukraine as the Holodomor of 1932–1933. 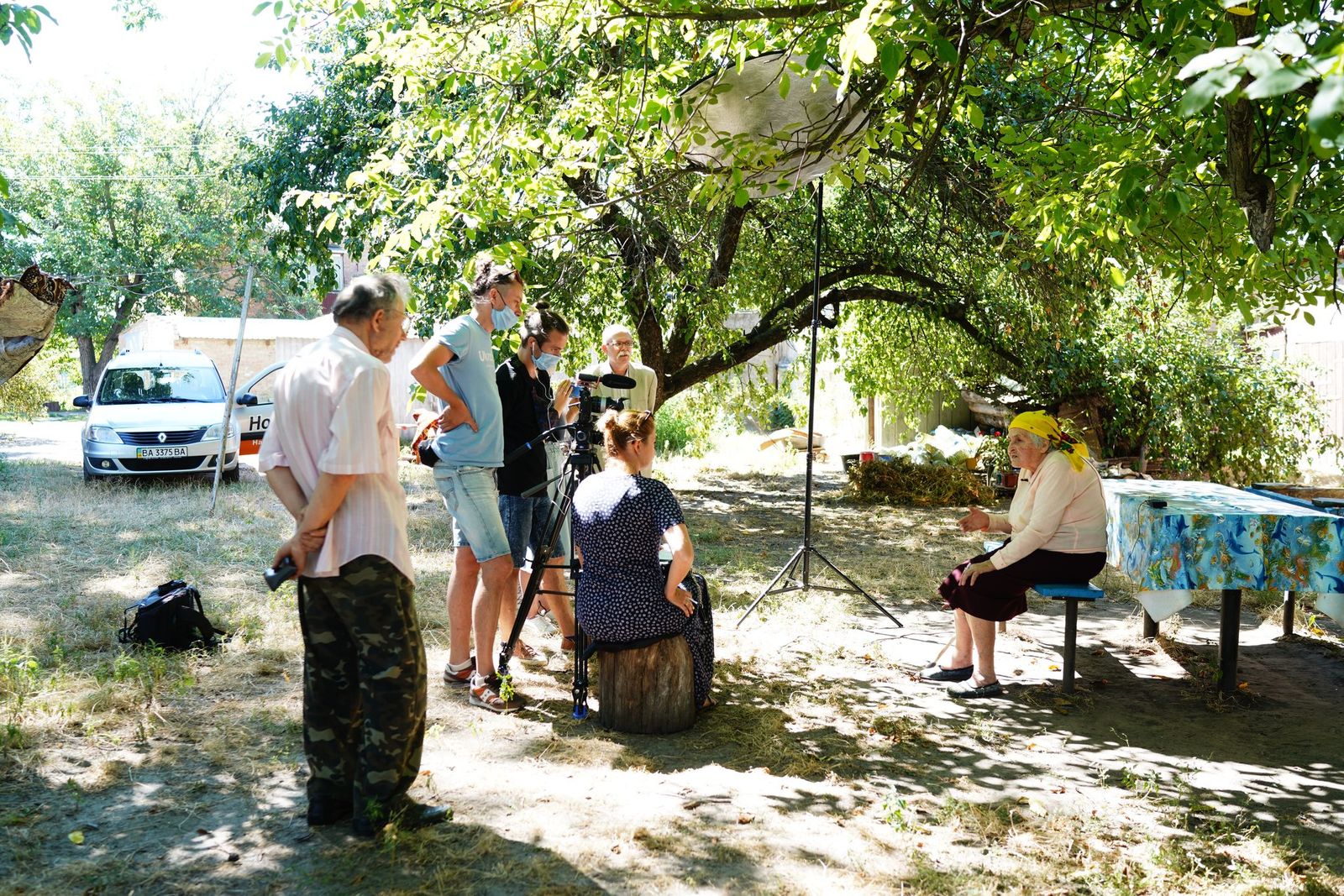 Photo. Employees of the Holodomor Museum together with members of NGO “Ukrainer” record the testimonies of Tetiana Krotova on her yard in Oleksandrivka town. By Valentyn Kuzan.

Holodomor in Podniprovia. The hamlet of Shevchenko.

Tetiana Ivanivna Krotova was born on October 30, 1928, on the hamlet of Shevchenko (now Travneve village) near Kropyvnytskyi (former Kirovohrad, then Zinovievsk). She was the fifth child in the family of Ivan and Ahrafyna Zaitsev. The family received the grounds on the hamlet in 1934 from Soviet authorities. At that time they moved here from Rivne village ansd started construction of their own house. Both parents worked in a kolkhoz.

Tetiana recalls that the crop of 1932 was not much less than prevoius one. The grain was collected from the fields, and by the order of collective farm management carried to an ampty house. It was neither sent to the city nor exported. It was laying and rotting there.

As Tetiana remembers, no one died from famine in her village. Partly this was due to the heal of local kolkhoz — Nykyfir Romanenko.

— Every evening he would give a list to the storekeeper on how much wheat every family needs. And the next day he world give grain to another family. If the authorities had known thuis, he would have been shot, of course.

People were afraid to grind this grain in theSometik mortars, because someone could hear, although they knew that there were no traitors in the village. However, fearing a sudden inspection or even the fact that someone else could pass by the house and hear the grain being ground, the villagers did not risk doing so.

Sometimes locals went to the neighboring villages for food. They went for 10 or even 20 kilometers to exchange the everyday goods for something edible.

Due to the kindness of the collective farm management, the family of Zaitsev managed to save a cow; therefore, there was always milk in their house. They cooked wheat in the cauldrons in whole.

— Now, as if in front of me, there is a cauldron that my mother pulls out of the oven. And the wheat is boiled. It was not, like now, when everyone has a separate plate there, were large bowls. Mom would pour that wheat into a bowl, pour milk — and this was our company.

Whole grains are digested for a long time, so people went to the hut to meet natural needs so that no one would notice the wheat in the waste. Undigested grains were later picked by chickens, so they continued to lay eggs. 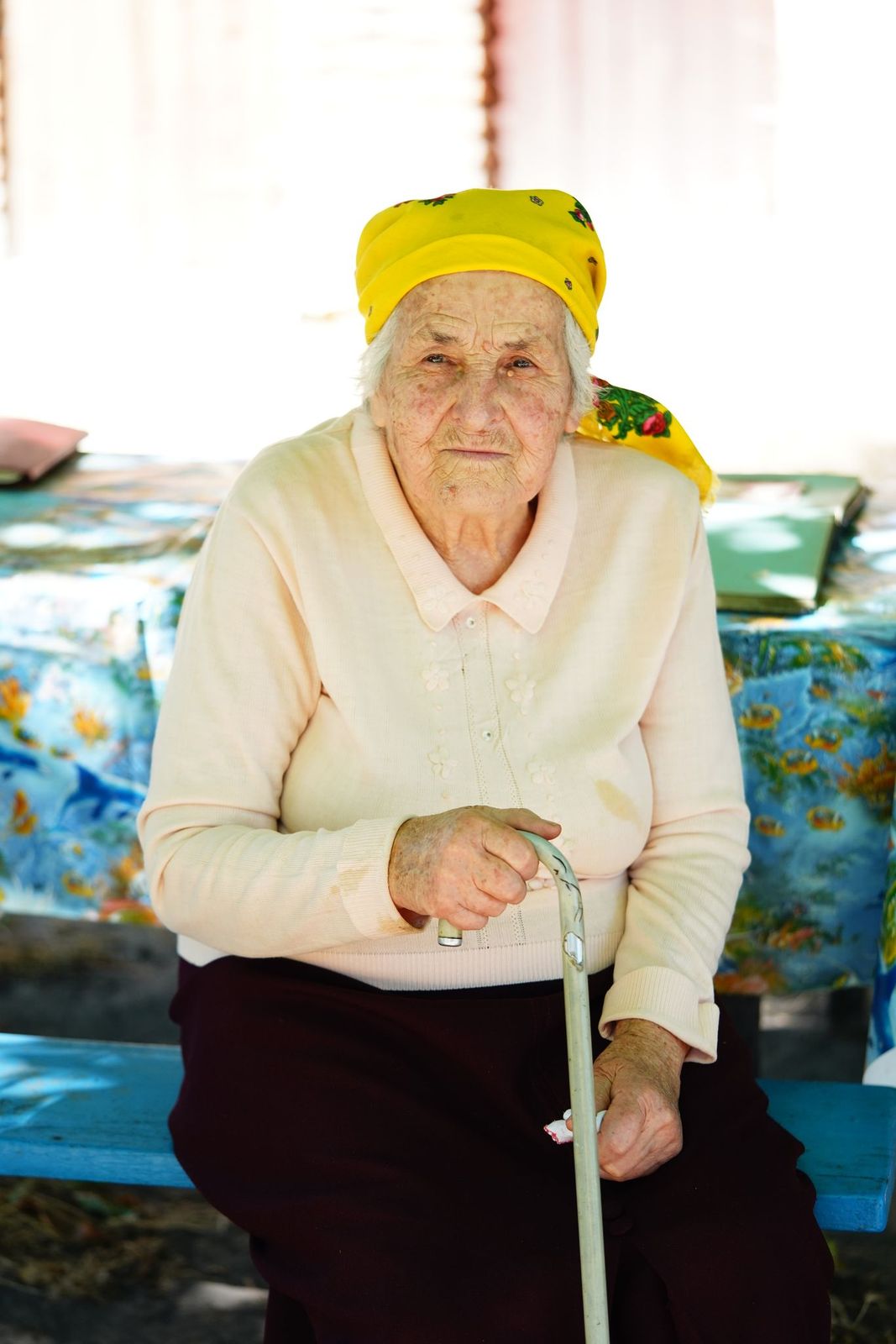 Moving to the village of Hromukha

In 1935, the family of Zaitsev moved to the father’s family to Hromukha village near Rivne. The family settled in the house, the previous owners of which were named “kulaks” and dekulakized.

The neighbors told Tetiana that in Hromukha the famine was more severe than in the hamlet. People ate mostly burdock roots, and in search of meat they went to the local cattle burial ground and ate the remains of dead horses. The harvested grain was not also taken out of here. As in Tetiana’s native village, here the wheat was dumped in a pile in one of the “kulak’s” houses. At the same time, the hut was used for other household needs: cows and chickens were kept there, the waste of which was mixed with grain and formed piles of humus.

Meanwhile, the residents of Hromukha died en masse because they had nothing to eat. This is how Tetiana’s aunt’s daughter Melania Shynkevych died. It was the only death in their family. However, whole families often died. In particular, the parents of the Zaitsevs’ neighbor Mariia Chabanka died. The whole family of an acquaintance of the family, Foma Tsybulia, died, too. In search of work, he went to Zaporizhzhie, and when he returned, he learned that his wife and three children had died of starvation. The parents of their neighbor Larion Lanatskyi, who lived across the street, died of starvation. Two boys, Ivan and Sasha Kinsha, lost their mother and father, and then Tetiana’s parents helped them in every possible way.

By order of the head of the collective farm Semen Kryvozhykha, the dead in Hromukha were buried in the local cemetery. Sometimes still alive people were taken there.

— The head of the collective farm caused the death of more than half of the village. “Garba” (cart for household needs), black oxen and the team — two strong men — they would go around the village every day, come to every house. Not only the dead, but also the living — well, sometimes the person would die soon — were taken to the cemetery. No pits were digged; the bodies were thrown together, and a pit was dug in 1935, and the bones were rolled into that grave with a rake.

When the head died, the villagers did not want to bury him properly.

— When he died, the tractor drivers dug the pit . The coffin was made in the collective farm, and it was not even brought to the cemetery by car, but by a tractor with a trailer. The men did not want to take him across the village, but drove him about five kilometers through the forest. They made a large circle and, entering the cemetery, lifted the trailer, and the coffin flew out of it. No one watched how it fell there: either sideways or straight, and covered it with ground. That’s how his fellow villagers buried him for the all the “good” he did to people.

In Hromukha, the raids in search of food took place even in 1935. Local activists continued to take away any food from the villagers, conducting house inspections, which, according to Tetiana, never happened on the Shevchenko hamlet. Although their family was not touched as newcomers, she remembers well the story she heard from her neighbor Mykola Hromko. Their yards were  lcated nearby, across the river.

— He was born, like me, in 1928. He said there were five children, a grandmother, a father and a mother in their family. Grandmother and mother were craftswomen; they wove cloth. Well, already during the Holodomor, the father took either in a cover, or a tablecloth, or a piece of cloth and went to other villages to exchange. Well, he exchanged the thongs for sugar beets; they did not wash and peel it, so as not to throw away the excess, washed it and put it in the oven. Here the activists came, without a head, to check, whether there is anything, whetherthey took everything to gram. And they smell the beets from the oven. He says, “They open the damper, take out that bowl, put it on the table (four or five of them came in), stand in a circle, eat it,” he says, “to the last piece. We, the children, were left wthout even a piece.”

Children who became orphans during or after the Holodomor were cared for by a collective farm patronage (an institution like an orphanage). It operated in Hromukha, and the children from all the surrounding villages were taken here. Once here, they had at least some chance of survival.

— How did it look like? A grandmother lived alone. She cared for these children, cooked and received rations for them. The food was allocated every day from the collective farm barn. And so these children lived here until adulthood. Then the boys joined the army, and the girls got married. Here, or in neighboring villages, or in the district center everyone remained in these areas. No one returned to their homeland, because there, apparently, none of the relatives remained and no one was waiting for them.

The authorities tried to settle migrants from Russiua in the empty houses left after the dead. Thus, 4-5 families from the Murom district of the Vladimir region of Russia appeared in Hromukha. New residents brought a lot of food with them from home: potatoes, peas, pears. However, none of them settled in a new place — although the land was fertile, it was necessary to work hard. Only one Russian woman married a local woman and remained in the village until her death.

In 1945, when the Second World War was still going on in some territories of Ukraine, Tetiana Krotova became a student of the school in Kropyvnytskyi (then Kirovohrad). At that time, people in Hromukha continued to starve, although there were no deaths in the postwar years. Tetiana received a scholarship (33 rubles, which was enough only for housing), and most importantly — 500 g of bread a day, which allowed her to survive.

In 1948, Tetiana graduated from high school and according to authorities desicion began working as an educator in an orphanage in the village of Tarutyno in Bessarabia. There were two orphanages in the Tarutyn district, since many children were orphaned after the Holodomor of 1932–1933 and the mass artificial famine of 1946–1947.

There she married, and since 1950 has been working as a teacher at a local secondary school. The same year the couple had a son. 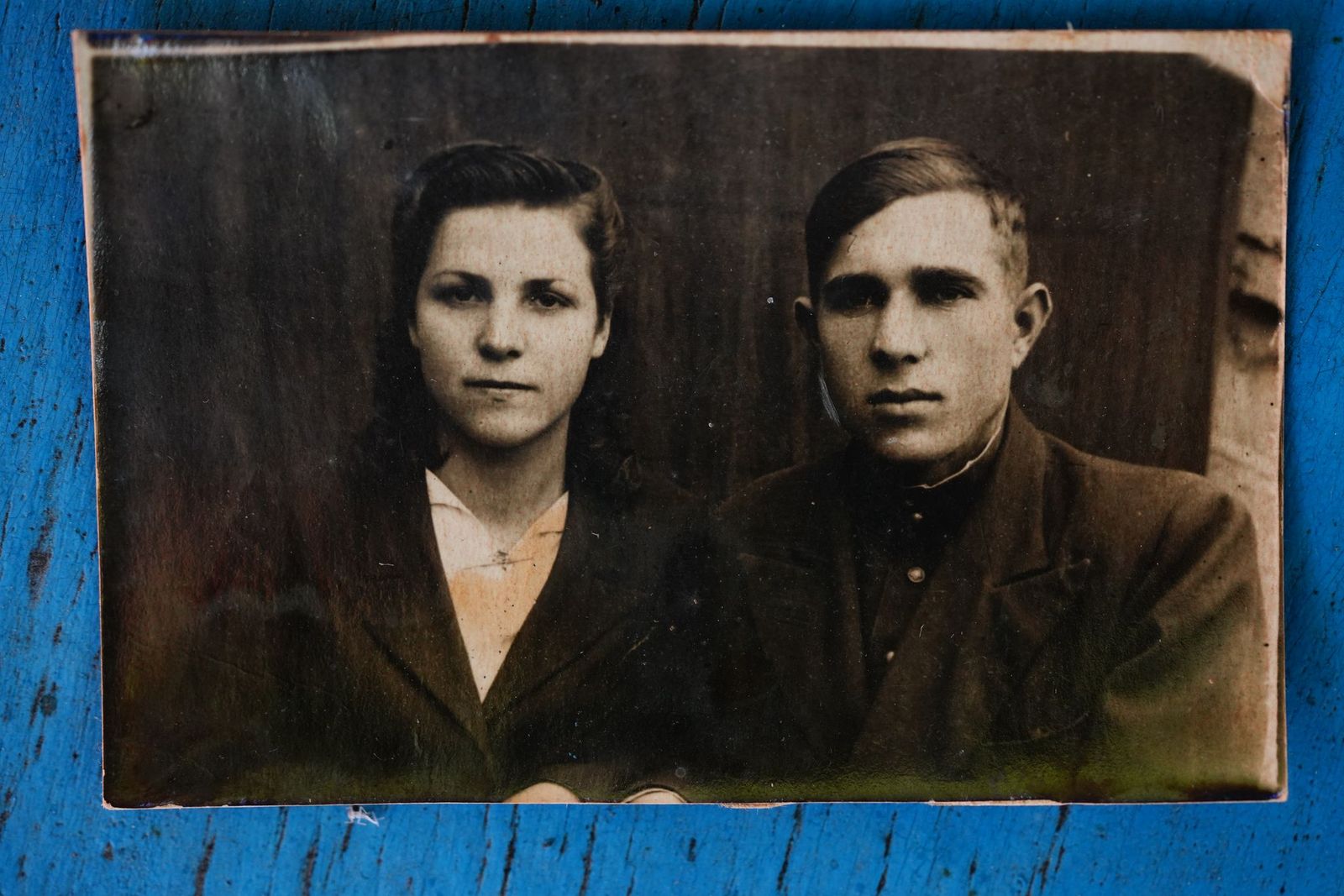 Photo. Tetiana Zaitseva and Ivan Krotov on their wedding day (30 Otober 1948). Tarutyno town. Photo from the archive of Krotov family.

Tetiana’s husband, Ivan Krotov, remembered the hungry years well and shared his childhood memories with his wife. He was born in the village of Hrodovske, Mostiv district, on the Black Sea coast. He came from the descendants of serfs-immigrants from the Orel province, who inhabited these lands during the Russian Empire. Ivan’s father died of starvation in 1932, and a year later his mother died. In addition to 9-year-old Ivan, his 11-year-old brother and 5-year-old sister remained orphans.

— In the collective farm, children were given rations — some water and one or two handfuls of flour. His older brother used to go for it during his mother’s lifetime. The mother herself did not eat it and died on the couch. The three of them slept on the stove and walked near the dead mother for a few more days, thinking she was asleep. Horse was also eaten, although children’s weak stomachs did not digest it. He remembered that someone could go and defecate with a piece of horse, and another went and picked it up. He would rinse it in the river and eat. And the cemetery was near the village, surrounded by a wall of shell rock — the village was by the sea. They approached the wall with a cart, threw the dead over it, and drove on. So it was in my husband’s homeland.

Later, all three children were taken to foster care in Odesa. After the seventh grade, Ivan entered a craft school, but World War II soon began. During the evacuation, he and his brother went all the way to the Urals, and later to Kazakhstan. At the age of 18 he went to the front, and after the end of war he returned to Ukraine. At the same time he met with Tetiana in Bessarabia. There they united their destinies, starting a new life together.