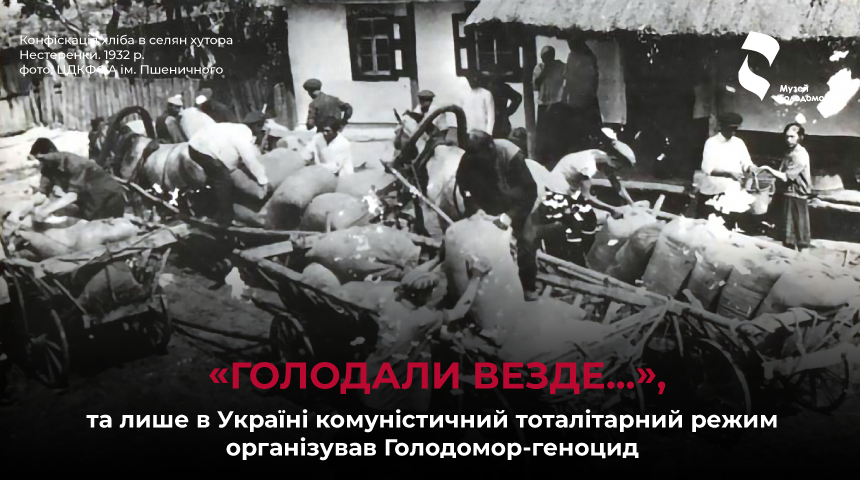 About the fact that there was starvation everywhere, as Russian historians used to repeat that mantra to me. And you, Ukrainians, exalt yourselves over other so-called “brotherly nations”.

However, conditions incompatible with physical survival were created for us Ukrainians. Party resolutions for Ukraine and the Kuban introduced fines in kind and yard patrols to confiscate everything edible. Why it was not organized in Russian “villages.” The resolution of the Politburo of the Central Committee of the CP(b)U of November 18, 1932, “On measures to strengthen grain procurement,” and the resolution of the bureau of the North Caucasian Regional Committee of the CPSU(b) “On the progress of grain procurement and sowing in the Kuban districts” of November 4, 1932, reveal the essence of the national dimension in the formation of the genocidal concept of 1932-1933 for Ukrainians. Ukrainians lived mainly in Ukraine, as in the Kuban. Both Ukrainian and Kuban resolutions initiated the application of fines, the organization of economic obstruction, the listing of Ukrainian villages and Kuban districts on “black boards”, the introduction of yard patrols, the creation of brigades from among collective farm activists to promote the full implementation of the grain distribution plan.

Facts are stubborn things. Let’s compare the memories of 1932–1933 of two children then: Volodymyr, a Ukrainian boy from the Poltava region, and Raia, a Russian girl who lived with her family in the Volga region. And we can conclude. They destroyed us because we are Ukrainians! A nation that knew freedom. A nation that is capable of defending freedom!
People’s memory imprinted this milestone.

The name of the locality where the events related to the Holodomor took place:
village Vovcha, now Berezhnivka, Kobeliatsky district, Poltava region.

What, in your opinion, was the cause of the famine?

At that time, I was only 11 years old, so I had no opinion of my own. My father may have known the answer to this question, but he didn’t tell me because he was afraid that I might say something wrong somewhere and there might be big trouble. People were afraid of each other and did not talk about this topic then. Many people disappeared then because someone wrote a denunciation on them.

Once, I remember, there was an incident. As a child, I saw a photo of Stalin in the newspaper and said: “Look, father, this is our tsar.” My father began to scold me terribly: “Somewhere, God forbid, they will think that I taught you. So that I don’t hear it again.” Now we hear on television that the famine in Ukraine was created on the instructions of Moscow. The reason was not that there were low harvests but that Stalin wanted to destroy Ukraine.

How long did the famine last in the village?

The famine lasted from the time they began to take away food from the people, that is, from the winter, from December 1932. It continued until the summer of 1933. It was especially difficult when all the goods hidden from the Komsomol brigades ran out, and the new harvest was still a long way off. It was in March, April, and May 1933. People ate everything that just started to turn green at the beginning of spring: grass, children-picked acacia, and green cherries. I’ve even heard of people eating people.

How many people died of famine?

Many children were swollen from hunger, and the elderly were dying in the village. Some men looked for work in other republics to feed their families. Our village was small, but about 100 people died of famine there. Most died in winter and early spring.

Do you know how grain procurement took place and its methods?

In our village, the village council organized teams that went around and took everything they found from people. The brigades’ members went with such “sticks” with which they searched the houses and the whole yard. They even searched the haystacks. They took, as they said, “surplus”. These brigades stopped at nothing and condemned people to death by starvation. They spared neither children nor the elderly. Corn collected from people rotted in barns, but they were not allowed to take it. Kaganovych even came to us from the district once to check how the Komsomol brigades were working.

How did you personally survive the famine, and which period of the famine was the hardest?

As I said, I didn’t really feel hungry. My father held the position of director, so we received rations, and Komsomol members did not come to us.

Tell about specific families that suffered from famine.

We had neighbours, Kononenko. There were ten children in this family. Four of them died. Their father, when he went to earn money, became very weak. He lost consciousness in the middle of the field, and the crows pecked out his eyes, and that’s how he died. The mother also died soon.

I once saw such a picture. A family with many children lived in one house. In order to somehow feed them, the mother and father hid a bag of corn in the cellar. The brigade found it there, picked it up and put it on the floor. When the bag was pulled to the door, the children put their hands up to grab the ear of corn, and their hands were beaten with boots.

All the corn, taken from people, was stored in the barn. A guard with a rifle did not let approach it. Sometimes the corn was thrown in a heap, and then the children ran around and grabbed the cobs and gnawed them so that they would not have time to take them away. And the guard fired a gun to frighten them.

The Kononenko’s youngest son studied with me at school. He was very weak from hunger, but he went to school. He died when he wanted to steal a loaf of bread. A man who sold bread caught him and beat him. And the boy was so frail that he died.

I also remember such a case. One boy, Andriy Striuk, drew very well. Once at school, he drew Stalin hugging Maria Demchenko (she was a striker of labour who worked on the beet chain). When the teacher saw the drawing, he was frightened, and then he grabbed it and carried it to the principal. If the teacher had not done this, then he himself would have been punished. After this incident, Andriy was imprisoned for ten years, but he did not return home for much longer.

In those days, people were afraid to say anything about Stalin. They were silent about the famine because they denounced even their own. I still remember that many people died in the Kuzmenko and Pohylyi families. There were still many suffering families.

How did children and the elderly suffer from hunger?

Children were given the last. In many families, parents gave their last piece to save their children. Therefore, it happened that children survived, and the parents died. The elderly were treated more cruelly. Therefore, there were almost no old people left.

The famine of 1932-1933, I experienced with my family in the village of Kologrievka, Lunensky district, Penza province (Russia). We lived on the bank of a small river: mother, father and six of us children. My parents worked on a collective farm. Father was a watchman, and the mother was a milkmaid. We had a small garden. We planted potatoes, beets, cucumbers, and cabbage. The trudodni, which my parents earned on the collective farm, was enough until the new year, and then live as you know. And the parents somehow got out. From the winter of 1932-1933 until the harvest of 1933, we fed on potatoes and vegetables from our garden. Sometimes there was bread. I don’t know where my parents got it. There were times when my mother brought milk waste from the farm, that is, what remained after milk was processed into butter. I remember how we scraped off the remaining oil from the paper in which it was wrapped.

On the collective farm, my father guarded the potato field. He often brought several potatoes into the house. I remember how we cut this potato into slices and baked it in the oven.
In our village, food supplies were not taken away, and searches were not carried out in peasant estates. And what could they take? We lived from hand to mouth, but there was enough food not to die of hunger. During the famine of 1932-1933 no one in our family died.
In 1938, our family left with my father for the Far East, where he was recruited.

The testimony was collected by Doctor of Historical Sciences, Professor Hanna KAPUSTIAN