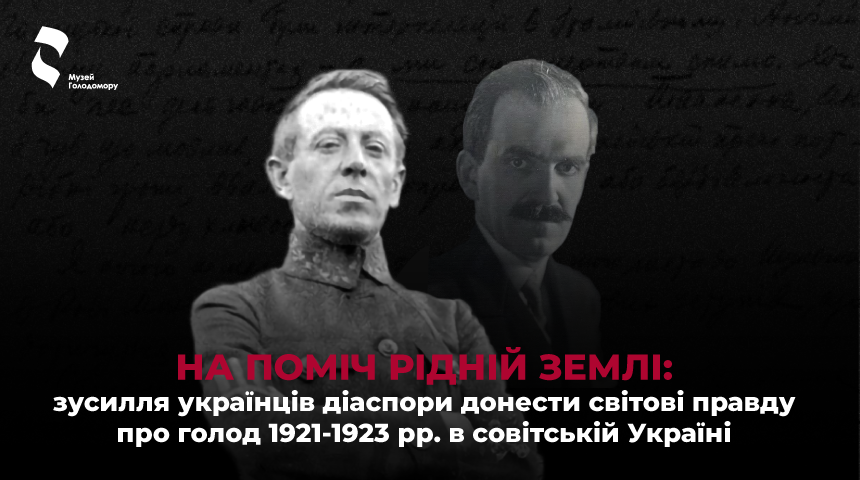 To help the native land: the efforts of diaspora Ukrainians to convey the truth about the famine of 1921-1923 in Soviet Ukraine to the world.

While the Ukrainian Bolsheviks hid the information about the mass man-made famine in Soviet Ukraine from the world public, trying to exterminate the anti-Bolshevik insurgent movement with the help of hunger terror on the instructions of the Kremlin. The opposition Ukrainian public figures, who found themselves abroad in exile, made every effort to convey the world the truth about the humanitarian catastrophe in Ukraine.

Ukrainian public organizations and the UNR government in exile cried out about the Ukrainian tragedy. Thus, already on August 12, 1921, the head of the Foreign Office of the Ukrainian Red Cross in Vienna (Austria), V. Matyushenko, addressed the president of the International Committee of the Red Cross in Geneva (Switzerland), G. Ador, with a Memorandum regarding assistance to the population of Ukraine. A month later, the plenipotentiary representative of the government of the Ukrainian People’s Republic, O. Shulgin, appealed to F. Nansen, the High Commissioner of the League of Nations for Aid to Starving Russia, with a similar request. A month later, he raised this question at the Paris Conference of the League of Nations.

The necessity to spread information about the criminal policy of the Bolsheviks, which caused the famine in Ukraine, was pointed out by the head of the Directorate and chief ataman of the forces of the Ukrainian People’s Republic, S. Petliura, who was in the West at the head of the exiled government.

In a letter to the Prime Minister of the Ukrainian People’s Republic dated May 28, 1922, he wrote, in particular, “…that the terrible misfortune that befell Ukraine was not the result of a crop shortage, not a crop failure, but the criminal activities of its occupying government, its mediocrity and inability to end the disaster. Crop failures can occur everywhere, in every state, famine, where there are appropriate social prerequisites for this. Obviously, the moral culprits of the famine in Ukraine are those “powers” that took away all grain reserves from our land, throwing the unemployed people into the arms of death by starvation. We must prove this truth to the whole world and start anew, on a new basis, the struggle against the occupying power of Ukraine, proving by the influence of the factors of the world that the famine that is destroying our land today will threaten Europe tomorrow and bring it the same misfortunes that we endure.”

Ukrainians abroad closely followed the situation in Ukraine and the position of the Russian Bolsheviks regarding the organization of aid to starving Ukrainians at international forums. The grounds for a successful resolution of the Ukrainian question at the II International Congress of Committees and Commissions for Aid to the Starving in the summer of 1922, where members of the Russian delegation O. Eyduk, P. Smydovych and M. Krestynsky tried to block information about the famine in Ukraine, were prepared by the Ukrainian diaspora . On the eve of the international conference, the Ukrainian National Union in Vienna appealed to the League of Nations, the International Red Cross and national Red Cross Committees with a Memorandum on aid to the starving population of Ukraine, its representatives in the matter of aid to the starving.

The women of the Ukrainian emigration did not stand aside from the troubles in Ukraine. At the International Conference of the Red Cross and Red Crescent Societies in The Hague (June 15-July 19, 1922), a delegate of the Ukrainian Women’s Union in Prague delivered a message about the famine in Ukraine, which shocked those present. And when she asked the Dutch Red Cross the next day why Ukraine did not receive any aid from the European Red Cross, she was told that “they don’t know anything about the famine in Ukraine, they asked to indicate which areas need this aid.” After returning from the congress, the delegate received a letter from the Red Cross in The Hague, which reported “that for the starving Katerynoslavsk and Kherson provinces a canteen will be organized.”

Ukrainians abroad tried to reach international organizations and governments of democratic countries about helping their brothers and sisters in Great Ukraine; they organized the collection of donations among members of the Ukrainian diaspora. Ukrainian newspapers in Europe and America became the mouthpiece of charity campaigns.