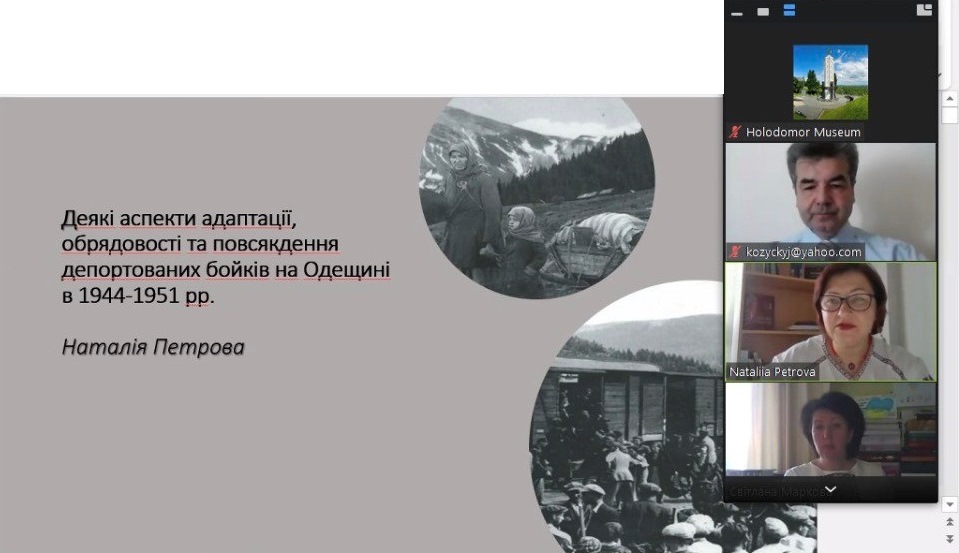 Today we are dealing with a phenomenon called “rashism”: a public dialogue among scientists has taken place.

Today, May 17, there was a public dialogue on “Deportations, mass repressions, man-made famine: policy instruments of totalitarian regimes of the XX and XXI centuries (to the 78th anniversary of the genocide of the Crimean Tatar people).”

The event was organized by the Holodomor Research Institute of the National Museum of the Holodomor-Genocide. The first part of the event took place in Zoom format.

Leading scientists, representatives of the authorities, the Mejlis of the Crimean Tatar people, and educators took part in the event.

Participants in the discussion talked about why it is necessary to investigate the crimes of the communist totalitarian regime in Soviet Ukraine, the similarities between the policies of state terror of the USSR and modern Russia against Ukraine, and why it was possible to repeat the policy of genocide.

“Today, we see the interdependence and gloomy symbolism of numerous historical events much more clearly,” said Svitlana Markova, director of the Holodomor Research Institute and doctor of historical sciences. – On May 15, we honoured the memory of the victims of political repressions. On May 18, we will commemorate the victims of the deportation of the Crimean Tatar people, which is in 2015, the Verkhovna Rada of Ukraine recognized as genocide. In autumn, we traditionally light candles in memory of the Holodomor genocide victims which Ukrainians suffered in 1932-1933. All these events – political repression, deportations, man-made famine – are different manifestations of the same policy of Russian imperialism in its communist guise. “

Svitlana Markova reminded that hunger, as a weapon of mass extermination of the Ukrainian nation, was first used by the communist totalitarian regime in 1921-1923. “The withdrawal and export of bread from Ukraine by the Russian Bolsheviks were brazen, total, and regular,” the historian emphasizes. – It did not stop even when the Ukrainians themselves lacked bread. The stalemate was repeated in 1932-1933 when the Holodomor became an instrument of Kremlin-organized genocide. In the year of the 90th anniversary of the beginning of the genocide, the Kremlin regime is again using hunger as an instrument of extermination of Ukrainians. “ In particular, it steals and exports Ukrainian bread from the occupied territories, destroys elevators and food warehouses, blocks the delivery of food and humanitarian aid to the occupied settlements, exports agricultural machinery, blocks Ukrainian ships with grain, and so on.

According to Svitlana Markova, evil can take different forms, and tools can be various, but the misanthropic ideology is common. “After Putin’s massacre, the world saw and was horrified by the Russian people, the Russian soul, and what the Russians have been turned into by the long-term use of manipulative technologies of totalitarian propaganda, the introduction of hereditary relapses into everyday practice,” she added.

And she emphasizes that for many centuries Russia has wanted to become the “Third Rome” and has convinced its citizens that they are spiritually superior to other nations by the very fact of their birth. And so, they seem to have the right to teach and punish all their neighbours. Today, before our eyes, there is another “reincarnation of the idea of the “Third Rome” in the form of an ideological doctrine that justifies the legitimacy of Putin’s aggression against Ukraine.”

Mykola Kyrychenko, Rector of the University of Education Management NAPS, Corresponding Member of the National Academy of Sciences of Higher Education of Ukraine, Doctor of Philosophy, adds that “today we are dealing with a phenomenon that has already received a scientific definition – “rashism.” According to the scientist, it is essentially about modern fascism in the 21st century. What is happening in our territory is not a war, but it is a genocide of the Ukrainian nation and our state as a whole,” he said. And here, according to him, it is especially important to keep the educational and scientific front, to convey to Ukrainians the truth about our past, which has always been tragic under Russia.

Olha Bazhan, director of the Central State Archive of Public Associations of Ukraine, says that today every conscious Ukrainian who wants to know more about the history of Ukraine can get information from archival sources without leaving home. “Our archive today has an electronic resource that allows you to view documents online,” says Ms. Olha. Electronic copies of documents of the Politburo of the Central Committee of the Communist Party of Ukraine from 1919 to 1935 were uploaded there. That is, everyone can read these documents directly from their smartphone to understand what practices were applied to the Ukrainian people in the XX century and, unfortunately, are repeated in the most shameful form today, in the XXI century.”