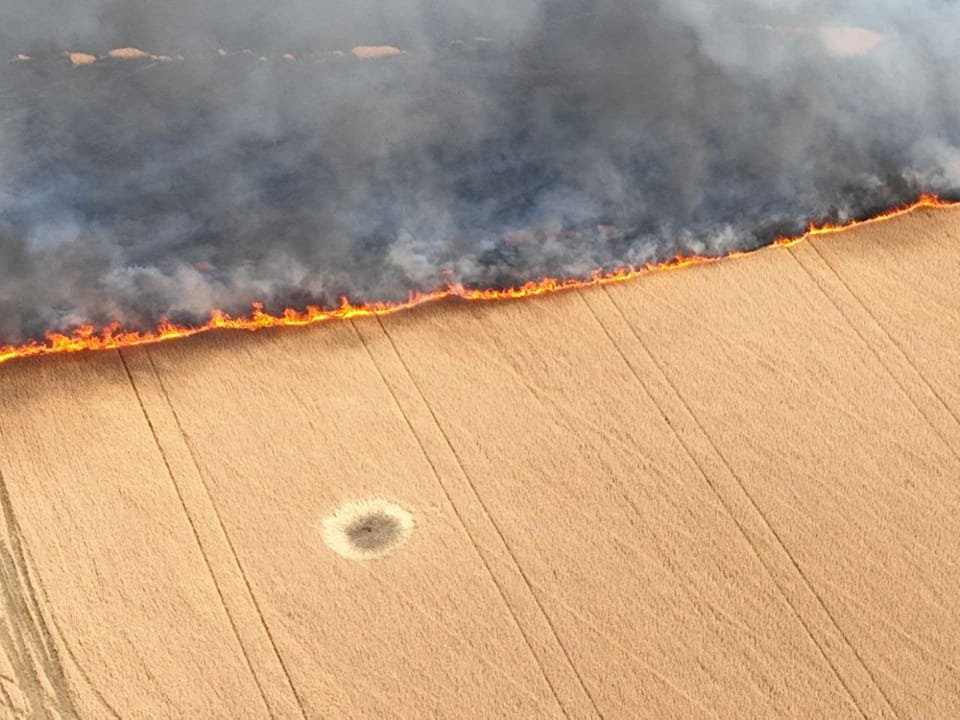 Ukrainian export of grain and Russian intimidation with hunger

The necessity for food is one of the basic human needs. For the body’s function, we need to consume a certain amount of calories daily. Regulation of their number depends on the human activity coefficient and is possible thanks to the variety of food products. But not all people on the Earth have access to even the minimum amount of food. The natural conditions of the territory of residence, the person’s financial situation, and artificially created conditions caused it.

Relatively peaceful coexistence of people in recent decades has become a guarantee of stable economic and trade relations. Exporting and importing countries of food and groups of goods have been identified in the world, and effective logistics for the movement of a large amount of it have been established.

Grain is one of the world’s main food commodities. Its value is extremely essential due to its energy value and relatively small price. This makes it accessible to broad categories and strata of the planet’s population. Thanks to geographical opportunities, the main exporters of cereal breads were identified at the end of the 19th – the beginning of the 20th centuries in the world. These include, in particular, both Ukraine and Russia.

According to the results of 2020, Ukraine and Russia together exported 28.5% (55.3 million tons) of all wheat and 16% (30.2 million tons) of all corn in the world. One of the largest consumers of Ukrainian wheat was African countries, for example, Egypt – 26%, Libya – almost 50%. Also, a significant percentage of Ukrainian grain was sold to Asian countries: Turkey – 11% of the total wheat import, Yemen – 23%, Bangladesh – 25.4%, Lebanon – 81%, Indonesia – almost 30%. Ukraine realized such exports with the previous year’s harvest of 64.6 million tons. But in 2021, the grain and leguminous harvest reached an absolute maximum of 84 million tons, while 81.8 million tons were expected.

The current year 2022 has brought us both natural disasters and a provoked global food crisis. Anomalous drought was recorded in Europe this summer. Germany stated that there had not been such a thing for several centuries. There, the natural disaster, in addition to crop losses, disrupted river navigation due to a decrease in the water level in the Rhine. A similar thing happened in the Czech Republic and France. In Spain, a significant part of the crops was burnt.

The second factor of the food crisis, which has already covered the whole world, was the full-scale invasion of the Russian Federation to Ukraine. Undoubtedly, it also affected the economy. In the central and eastern parts of the EU, this has caused bread prices to rise by an average of 18% per year, and Central African states may not receive more than 55% of wheat, which is usually imported from both Ukraine and Russia.

The organizers of the food crisis in Moscow are not using hunger as a weapon for the first time. But if earlier the consequences of this had local significance – the death of millions of Ukrainians during the Holodomor-genocide, so today tens of millions of people on different continents are at risk of starvation and epidemics. There is a danger of using hunger as a world-class weapon.

According to UN estimates, the planet population, as of July 14, 2022, has crossed the mark of 8 billion people. According to the FAO (Food and Agriculture Organization of the United Nations), at the beginning of September, the number of hungry people in the world, reached 828 million, that is, more than 10% of the world’s population. On September 13, more than 60 farmers’ associations from 11 Central African countries gathered in Yaoundé, Cameroon, to call on the governments in the region to help people cope with food shortages. Cameroon, Central African Republic, Congo, Gabon, Equatorial Guinea, Chad, Angola, Burundi, Democratic Republic of Congo, Rwanda, and Sao Tome and Principe participated in the conference. Therefore, one of the reasons for the lack of food in African countries is the war of the Russian Federation against Ukraine.

According to estimates by the UN World Food Program, before the full-scale invasion of the Russians, Ukraine produced enough food for 400 million people, that is almost ten times the population of Ukraine. It means that our country was able to feed 10 more such countries. The Ministry of Agrarian Policy and Food of Ukraine expects that in 2022 the harvest of grain and oil crops will amount to about 67 million tons. Up to 10 million tons of potential harvest in 2022 was lost due to Russia’s temporary occupation of some regions of Ukraine. Domestic consumption is estimated at 20-22 million tons. The department is ready to export at least 45 million tons from the new harvest starting in October.

In the Russian Federation in 2021, a low harvest was collected – 121.4 million tons. Moscow introduced restrictions on grain exports. However, such a policy was presented as a consequence of the sectoral sanctions introduced by the EU against the Russian economy. It deepened the world food crisis.

In order to eliminate Ukraine from the grain market, the Russian Federation immediately began a blockade of Black Sea ports, and stopped export deliveries of Ukrainian grain after the start of a full-scale invasion. Infrastructure related to the storage and export of grain, is periodically attacked. One of the last – on September 4, Russian missiles destroyed a granary in the city of Voznesensk (Mykolaiv region).

Despite the Russian invasion, the export of grain from Ukraine to the world market did not stop. Already, on June 3, more than 47 million tons of 2021/2022 a/c products were exported. Exports took place through EU solidarity corridors by land transport. From March to August 2022, such exports increased from 200,000 tons to 3 million tons every month, and in total Ukraine exported 11.6 million tons of grain in this way. Most of these exports go to countries in Africa and Asia.

On July 22, two documents were signed in Istanbul with the participation of the UN, Ukraine, Turkey and Russia on the creation of a corridor for the export of grain (the so-called “grain initiative”) from three Ukrainian ports – Chornomorsk, Odesa and Pivdenny. As of September 19, the export of agricultural products through these ports reached 3.9 million tons. The total number of vessels for the countries of Asia, Europe and Africa has reached 169. It is assumed that the volume of Ukrainian food exports through the Black Sea ports can reach 3 million tons every month.

The importance of Ukrainian grain exports is confirmed by the help of many countries around the world. In particular, France and Romania intend to sign an agreement to implement a number of measures for the development of Romanian infrastructure and logistics, which will make it possible to increase the supply of agricultural products from Ukraine to developing countries, especially the countries of the Mediterranean region. It is believed that the grain will be exported by an alternative route – it will be delivered by land and rivers to the Romanian ports of Galati and Constanta, from where it will be exported by sea. In August alone, Danube river ports transported 1.6 million tons of agricultural products for delivery to foreign markets, railways transported about 1 million tons, and motor vehicles – more than 0.6 million tons.

A significant part of Ukrainian grain goes to the poorest countries in Africa. Most of such cargoes are paid for by international organizations. Ukraine also joins this process. In particular, on September 16, the Cabinet of Ministers of Ukraine by Resolution No. 1040 allocated UAH 420 million to reimburse the cost of wheat grain (not lower than 3rd class) in the amount of up to 50 thousand metric tons to provide humanitarian aid to the Federal Democratic Republic of Ethiopia and the Federal Republic of Somalia.

The Kremlin did not believe that Ukraine would restore grain exports because this fact violated Moscow’s plans to intimidate the world with hunger. That is why the President of the Russian Federation stated that “practically all the grain exported from Ukraine is directed not to poor, developing countries, but to the countries of the European Union.” Without hiding his intentions, he asked a question, behind which is hidden the possibility of a missile attack on active Ukrainian ports: “Maybe it’s worth thinking about limiting the direction of grain export and commercial food via this route?”. According to him, Russia will insist that the “grain agreement” is aimed at improving the situation in world markets, not Europe.

In contrast to the Russian leader, UN Secretary-General António Guterres thanked everyone involved in the preparation and shipment of Ukrainian food as part of the Black Sea Grain Initiative to fight hunger. It should be emphasized that the agreement was concluded for only 120 days, and its further extension is an important step in preventing the spread of hunger.

Large stocks of grain against the backdrop of drought in Europe and reductions in crops and crop failures in other exporters can be used by Moscow to displace partially competitors from different regions of grain importers or to monopolize the food supply completely. The Russian Federation’s creation of conditions for the collapse of prices is a direct threat to the destruction of the world grain market.

In Third World countries, such a lever as hunger enables Moscow to interfere in political processes to establish “friendly” regimes.

The Russian Federation’s temporary occupation of some regions of Ukraine and hostilities have made agricultural activity in a large area, mainly active agriculture, impossible. The continuation of the occupation, and the danger of shelling from the Russian Federation is the main negative factors, due to which there is a reduction in the sown area (it is expected to sow 65% of last year’s area – 4.7 million hectares). Victims due to temporary occupation or shelling of the farm will be forced to spend a financial asset for some time on restoration and not on improving technical equipment and purchasing better varieties of grain for sowing. The establishment of new logistical routes for the grain export gives hope for the stabilization of the situation. Ukrainians are aware of future difficulties and continue to work on their land to protect themselves and the world from hunger.

Thus, the Russian Federation’s plans for the absolute destruction of Ukraine’s socio-economic potential in the field of agriculture and the creation of a food disaster in the world have failed. Instead of the broken global food distribution system, a new one is being created, in which Russia is viewed as an unreliable exporter. The participation of world countries in the joint establishment of alternative corridors for the export of Ukrainian grain minimizes the threat of possible Russian intimidation by the starvation of millions of people.