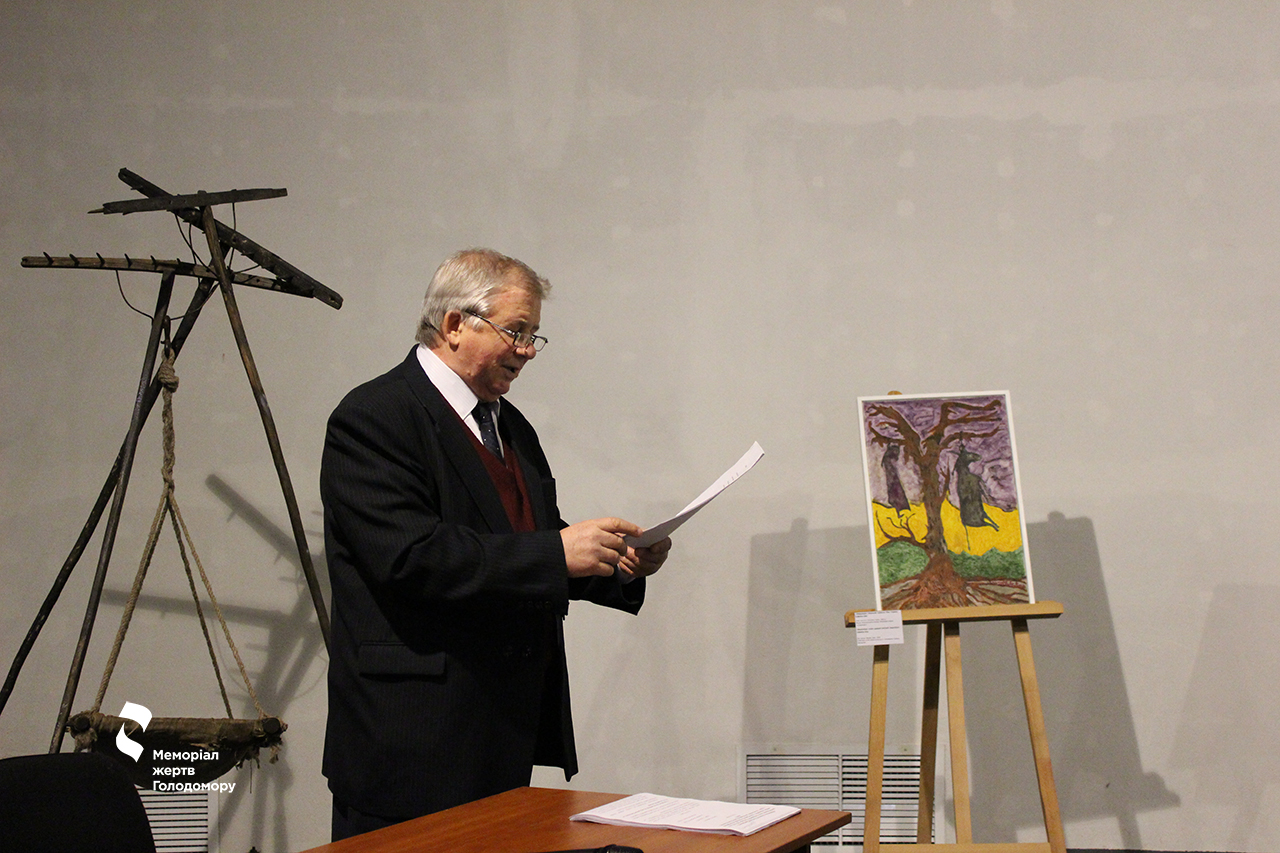 Viktor Skavonik delivered a lecture about criminal case on Holodomor

On October 25, 2018, the National Museum “Holodomor Victims Memorial” hosted a lecture by the Candidate of Legal Sciences, Honored Lawyer of Ukraine, Viktor Skavronik on the issue of “The Criminal Case of Genocide in Ukraine: the Characteristics of the Preliminary Examining by the Court of Appeal and the Problems of the Objective Calculation of the Number of Victims” .

While working as a judge of the Chamber of Criminal Cases of the Kyiv City Court of Appeal, Skavronik made a preliminary review of the criminal case on the fact of committing an act of genocide against the Ukrainian people in 1932-1933. On January 13, 2010 he proclaimed the court ruling in the case. The text of the court ruling can be found at the museum’s website.

Basing on the materials of the pre-trial investigation, the lecturer conducted an excursion into the historical circumstances of the crime. Also, he spoke about the differences between the famine in Ukraine, in the Kuban (where 75% of the population were Ukrainians) and in other regions of the USSR. Using the material of the expert opinion of the pre-trial investigation, he recounted the actions of the Soviet Union authorities in 1932-1933, that confirm the intention to destroy the Ukrainian nation as such.

In his lecture, the judge focused on the uniqueness of this criminal case, which was closed in connection with the death of persons who committed a crime of genocide. “We consider it necessary to explain to all kinds of “opponents” that it is possible to speak about “the condemnation” of Stalin, Molotov, Kaganovich and other persons who committed a crime of genocide on the territory of Ukraine in 1932-1933, about the ruling on a “court sentence” only figuratively and only in a political, philosophical, historical, moral sense.” – the lawyer said.

This is explained by the fact that the case was considered at the stage of preliminary consideration only (according to the rules set forth in chapter 23 of section 3 of the CPC of Ukraine) and, in accordance with the requirements of Art. 245 of this Code, it was not considered by court and was not able to be considered by it.

Also, according to the statements of the CPC of Ukraine (in the wording of 1960), which was in force at the time of the investigation and trial of this criminal case, the presenting of charges to the dead persons, and drawing up an indictment on them was not foreseen, as well as it is not provided for by the current procedural law.

However, this does not mean that Stalin, Molotov, Kaganovich and other organizers of the Holodomor are innocent. The decision to close the case clearly states: “After verifying the facts of the case set forth in the resolution of the pre-trial investigation body, the Court of Appeal, on the basis of a thorough analysis and a comprehensive assessment of the evidence gathered in it, collectively notes that the consequences that Stalin J. V., Molotov V. M, Kaganovich L. M, Postyshev P. P, Kosior S. V, Chubar V. Ya., Khataevich M. M. committed a crime, that is properly qualified in part 1 of Art. 442 of the Criminal Code of Ukraine as genocide of a part of the Ukrainian national group, are correct”.

In 2009, the Security Service of Ukraine instituted criminal proceedings in connection with the commission of an act of genocide against the Ukrainian people in 1932-1933. The court and prosecutor’s staff, historians, lawyers and other involved experts conducted impartial and thorough work, to carried out a mission that Ukrainians have been waiting for centuries. The day of January 13, 2010 became an event in Ukrainian history, because on that day the Kyiv Court of Appeal’s ruling confirmed the legal qualification of the Holodomor of 1932-1933 in Ukraine as a crime of genocide.

In providing of this criminal case, the Security Service of Ukraine was guided by the norms of both national legislation and those international treaties, which according to Art. 9 of the Constitution of Ukraine and Art. 3 of CCU are the part of Ukrainian criminal law. In addition to the 1948 UN Convention on the Prevention and Punishment of the Crime of Genocide, the international legal instruments, such as the 1950 European Convention on Human Rights, the 1966 International Covenant on Civil and Political Rights, 1968 United Nations Convention on the Non-Applicability of Statutory Limitations to War Crimes and Crimes Against Humanity.