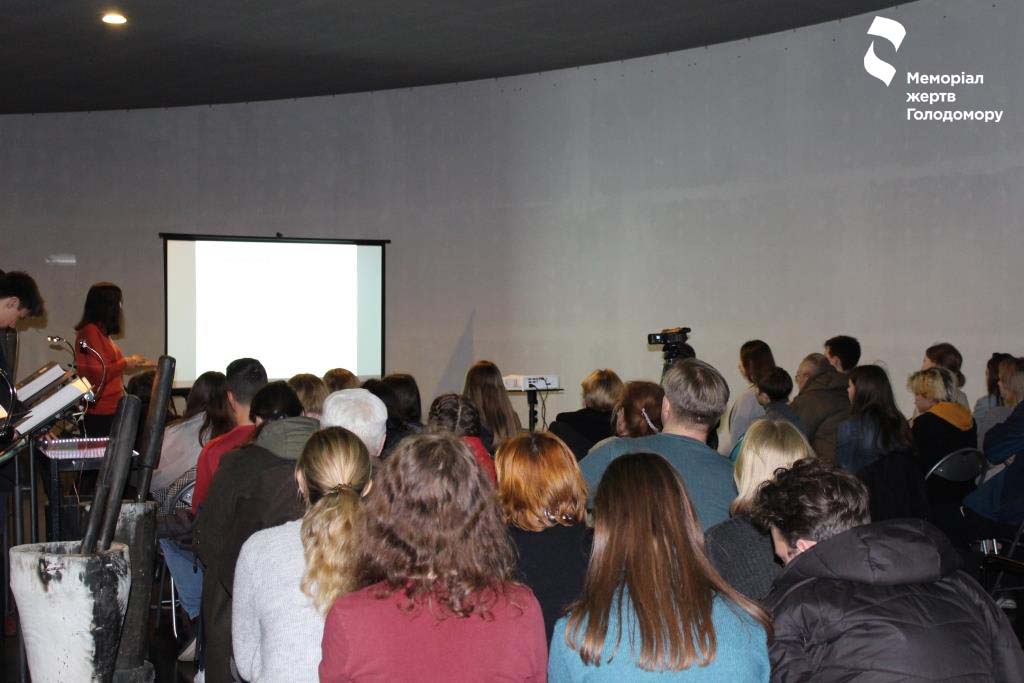 Visual Images in the Memories of the 1932-1933 Holodomor Witnesses

On April 17, 2019, in the Hall of Memory of the Holodomor Victims Memorial, a lecture of the candidate of historical sciences, ethnologist Iryna Batyrieva “Visual Images in the Memoirs of the Holodomor of 1932-1933 Witnesses” took place.

The lecture was based on the concepts relevant to contemporary historical research such as image and memory. The analysis of general and concrete “visual images” was focused on two perspectives: first, the constructing and imposing of the images of “enemy” and “not enemy” by the Soviet totalitarian power, and the reflection of these images in the memories of eyewitnesses; second, the reproduction of visual images by the individual and collective memory of people who have experienced internal psycho-emotional processes and feelings generated directly by the disaster of the Holodomor.

The researcher described how the propaganda and agitation tools in the Soviet Union established the myth of a fatal threat from the “inner enemy,” having pinched its label to certain social groups of Ukrainians: intellectuals, priests, and peasants.

On the example of the first Soviet animated film Soviet Toys (1924), directed by Dzyga Vertova , there was shown how the regime used propaganda to share the ideas among the general public, for manipulation of public opinion and psychological preparation of society for mass murder – the destruction of the Ukrainians by famine.

On the basis of the analysis of Holodomor eyewitnesses’ accounts, the scholar told about the dominant images of memory of famine: images-characters, images-things, visual, olfactory, and touch images. In the wave of the atmosphere of fear and violence of the Holodomor, in the narratives of the Holodomor witnesses, the negative images of the immediate executors of artificial famine organized by the Kremlin and the positive images of the child, mother-woman, and “farmer-kulak”, as opposed to its “sovietized” image, antipode.

The listeners were able to listen to the discussion and get the answers to pre-emerged questions: Who became the so-called “enemy” of the Russian Bolsheviks in Ukraine? Who and for what, has formed the images of “Ukrainian bourgeois nationalists”, “Petliurists”, Ukrainian “kulaks”? What were the methods of humiliation used by the Soviet totalitarian regime towards Ukrainians? Why the Holodomor? How does human memory reproduce the internal psycho-emotional processes and feelings generated by the peril of the Holodomor? What the dominant Holodomor images still live in human memory? What does this knowledge give us today?

In consequence, Irina Batyrieva showed the parallels between the historical past and the present, drew attention to the urgency of today’s threats, which propaganda mechanisms of any totalitarian regimes include, manipulation of consciousness, etc. Even nowadays, the Soviet past of Ukraine is important. From time to time, it appears in the form of a mythology constructed in the past.