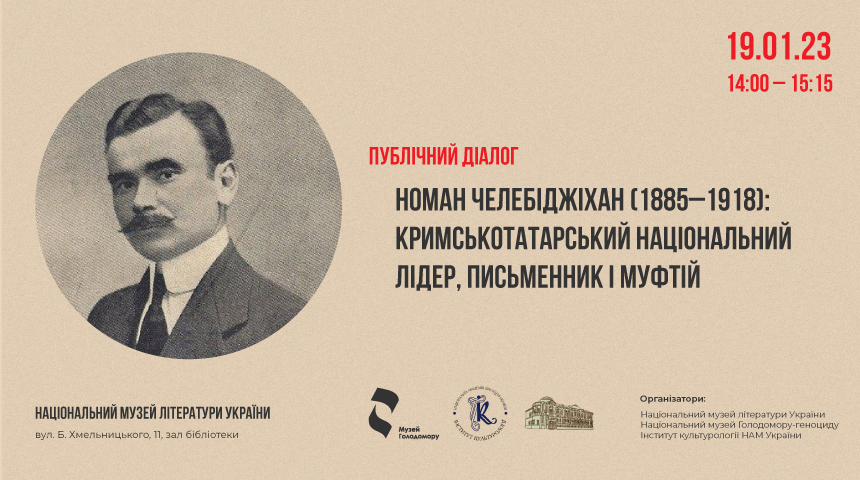 We invite you to the public dialogue “Noman Chelebijihan (1885–1918): Crimean Tatar national leader, writer and mufti”, which will be held on January 19, 2023, at the National Museum of Literature of Ukraine.

Noman Chelebijihan is a Crimean Tatar politician and statesman. One of the organizers of the first Kurultai, the first head of the government of the Crimean Democratic Republic proclaimed in 1917, the first mufti of the Muslims of Crimea, Lithuania, Poland and Belarus. The words of his poem “Ant etken!” (“I swore!”) became the national anthem of the Crimean Tatars. In January 1918, he was arrested by the Bolsheviks and shot on February 23 in the city prison of Sevastopol.

Moderator of the event – candidate of historical sciences, leading researcher of the National Museum of the Holodomor-Genocide Andrii Ivanets.

1. Portrait against the background of the epoch. The biography of Noman Chelebijihan based on the books of the Crimean Tatar writer and researcher Yunus Kandym and the Ukrainian historian Andrii Ivanets. Speech by Andrii Ivanets.

2. Literary work of Noman Chelebijihan in the context of Crimean Tatar literature at the turn of the century. Speech by the editor of the series “Crimean Tatar Prose in Ukrainian”, senior researcher of the Institute of Cultural Studies, Nadiia Honcharenko.