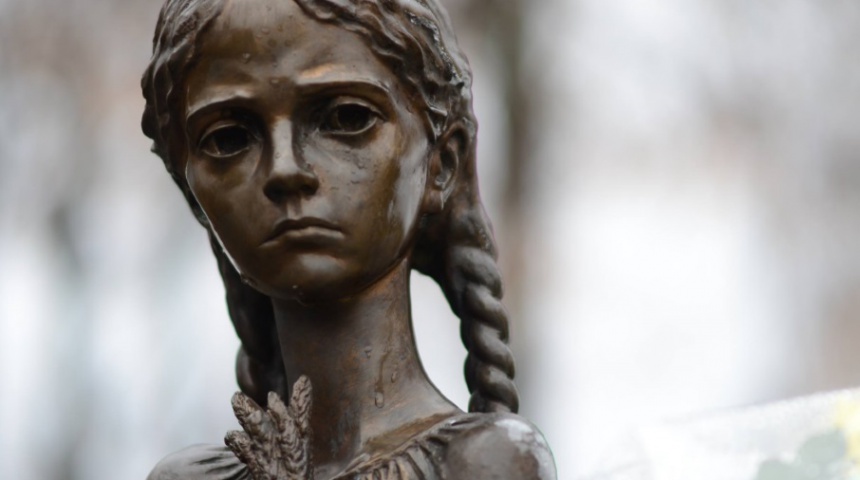 On the night of August 21-22, unknown individuals tried to destroy the sculpture “Bitter Memory of Childhood” on the territory of the museum. This news outraged Ukrainian society and the world community. We publish the reactions of intellectual and diplomatic circles to the event.

Olesia Stasiuk, Director General of the Holodomor Museum, commented on the act of vandalism against the monument: “The nation’s culture is built on the foundations of historical memory. The memory of the Holodomor is a part of the history of every Ukrainian, which we have no right to forget in order to have a sustainable future. What was done today with the “Bitter Childhood Memory” sculpture is an unacceptable act of insult to the memory of an entire nation.”

The Consulate General of Ukraine in San Francisco was one of the first to condemn the actions of vandals.

In connection with the act of vandalism, the 22nd Prime Minister of Canada Stephen Harper called for support for the Holodomor Museum. He wrote about this on his Twitter page.

Canadian politician James Bezan, a member of the House of Commons and author of the Holodomor bill in Canada, also called for an investigation into the incident as soon as possible.

Also,  Yvan Baker, a member of the House of Commons of Canada, expressed his concerns about the act of vandalism. He named the desacration an attempt to trample on the memory of the millions of victims and survivors.

The Ukrainian World Congress has appealed to the Ministry of Internal Affairs of Ukraine to investigate as soon as possible and ensure adequate state protection of the memorial.

UWC President Paul Grod said: “We have been witnessing a global and coordinated anti-Ukrainian operation, including vandalism of memorials and disinformation campaigns that distort and falsify the truth about Ukraine’s history. It includes the desecration of the Holodomor memorial in Kyiv, vandalism at a Ukrainian cemetery in Toronto, defacing the future Communism victims memorial in Ottawa, among others. Kremlin propaganda is attempting to rewrite the history of our people, erase the memory of millions of Ukrainian victims of the totalitarian regime, turn our allies against us, and sow discord in our global communities. I call upon all Ukrainians and friends of Ukraine around the world to stand up to these anti-Ukrainian provocations and Russia’s global disinformation campaign. Truth is on our side.”

In his article for KyivPost, First Deputy President of the World Congress of Ukrainians Stefan Romaniw called the desecration of the monument another attempt to destroy historical memory.

The US Holodomor Committee also condemned the act of vandalism on Twitter and called on the Ukrainian government to investigate it.

In addition, the President of the American-Ukrainian Business Council Morgan Williams made a statement about the incident:

“The recent act of vandalism against the Holodomor sculpture “Bitter Memory of Childhood” at the National Museum of the Holodomor Genocide in Kyiv was a horrible, despicable, outrageous, cowardly and tragic act against the millions of Ukrainians who were starved to death, under Stalin’s leadership, during the Holodomor, 1932-1933 in Ukraine.  The President of Ukraine, Volodymyr Zelenskyy, should immediately speak out strongly against this act of desecration and take all actions necessary to investigate the desecration and bring those responsible to justice.  The Government of Ukraine should be immediately providing significant leadership in Ukraine and throughout the world by standing firmly against such acts of violence and hatred.

The National Museum of the Holodomor Genocide in Kyiv belongs to the people of Ukraine as a major institution of the government of Ukraine. Construction is underway to significantly expand the size of the Holodomor Museum, to be the largest museum in Ukraine. The world-class expansion is a major step forward and is being paid for through a public/private partnership set up between the government of Ukraine and several special private, not-for-profit Foundations, established in Ukraine, Canada and the United States, for the purpose of raising funds from private donors.”

The People’s Deputy of Ukraine, historian Volodymyr Viatrovych noted in his Facebook: “… somewhere near us live monsters capable of plundering such a monument. Then they took away the bread, now they want to take away the memory. “

Ukrainian writer and public figure Oksana Zabuzhko compared the desecration of the sculpture to the destruction in 2012 of a memorial cross to those shot in front of the October Palace.

The news is updated.