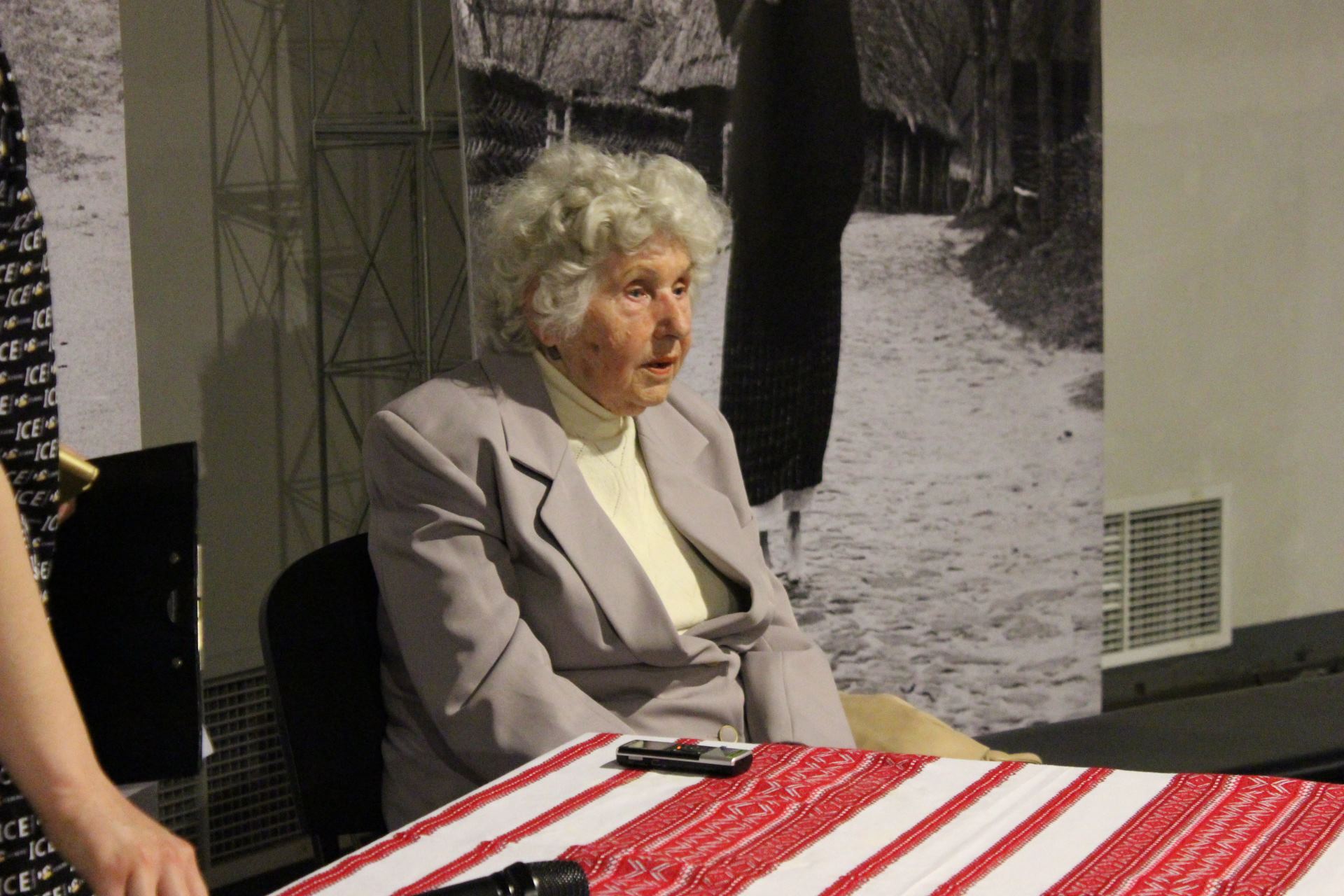 Yevdokiya Mikhailova:"I will never forget that millet porridge. I never cook it, even now "

On May 19, 2017, students of 6th grades from school №53 (Kyiv) with intensive study of German language had a meeting with a witness of Holodomor – Yevdokiya Pavlovna Mikhailova (born 20/10/1928). She was a child when the Soviet regime made a decision to destroy her, her family, a part of her nation; she lived in village Zlatoustivka, Kryvyj Rig district of Dnepropetrovsk region.

The respondent was a 5-year-old girl and only separate images were etched in her memory: she who was exhausted by hunger as she slept on the stove bench as her older brother was giving her pink water.

– I was lying on the stove bench hungry and swollen. I remember vaguely. Only as I was asking my brother: Grysha, tell me, do you remember how you gave me pink water to drink? He said: it was when we had all our harvest taken away and to survive somehow mom was steaming cherry branches, – says the narrator.

Family of Yevdokiya Pavlivna survived only thanks to crumbs of food that mom of the witness was bringing for her children from the farm, “I will never forget that millet porridge. I never cook it, even now. “

While growing up, Yevdokiya Pavlivna was asking her brother about the horror which took place in 1933. The brother told her the story, that when he asked the village head for some food for his little sister and Karapetskyy, the head of the village council, gave the boy half a kilo of soybeans to feed “Dusen’ka” who was swollen from hunger.

There are also many facts which Yevdokiya Pavlivna’s mother told her: “Dad found a piece of oilcake somewhere and mom somehow cooked a dish of it, which we called makorzhenyky.”

The witness remembered how she and her brother were hunting gophers, “Brother said that there were such creatures in a field, gophers, they live in fields and eat grain. Brother filled the ground pit with water and gopher ran out of it. Hit it on the ground and you already have meat. “

“God forbid you to survive something like this” –said Yevdokiya Pavlivna to the students.

We thank Yevdokiya Pavlivna for her memories and the opportunity to hear the real story of a person who survived one of the greatest catastrophes of the XXth century – Ukrainian genocide 1932-1933. Our task is to preserve this memory and to pass it to the future generations in order to not let anything like this Holodomor ever happen again.

We remind you that everyone can leave their memories or memories of their relatives about genocide-famine for the museum and history and send them to the official museum address: [email protected] or mail them: 01601, Kyiv, Lavrska str. 3.

Museum also maintains a register of Holodomor victims ‘names, based on martyrology of the National Book of Memory and testimonies of relatives of those who were killed.