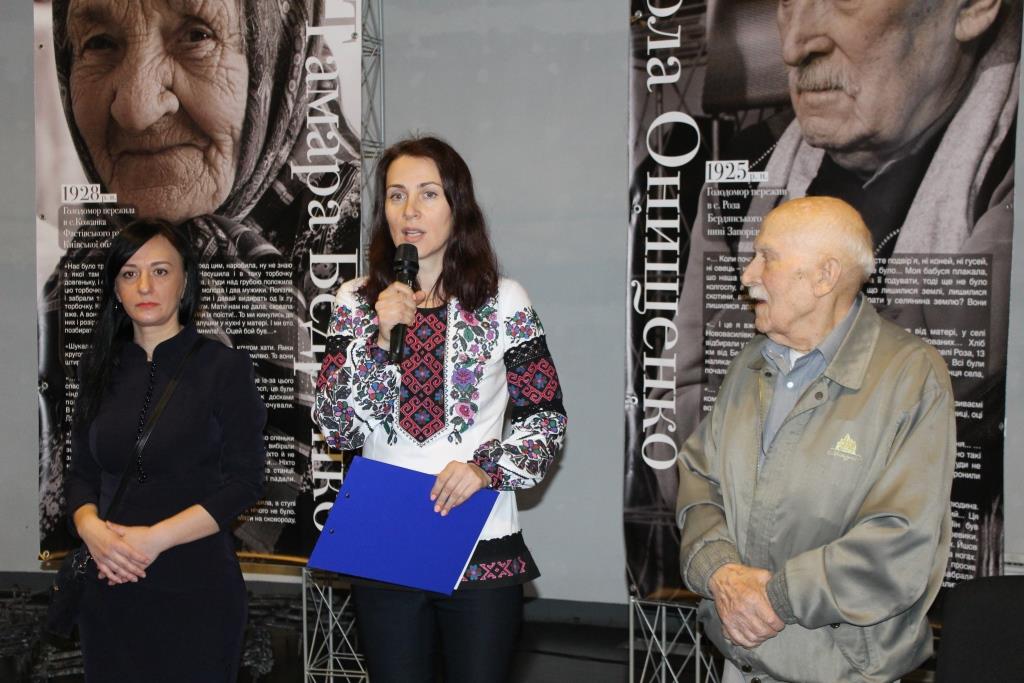 10 narrations as one story: photo exhibition «The Watchmen of Truth» was opened in the Holodomor victims' Memorial

On April 11, 2018, the photo exhibition «The Watchmen of Truth» was presented at the National Museum «Holodomor Victims’ Memorial». In it, before the visitor, there are stories of ten people who survived during the Holodomor and shared their memories with museum staff. And all these personal memoirs are framed in one holistic story – the story of the crime of genocide – the Holodomor against the Ukrainian nation.

The exhibition was presented by Director General of the Memorial  Olesya Stasyuk, the photographer of the project Ksenia Piliavskaya, who is both a granddaughter of one of the witnesses, a witness of the Holodomor and one of the heroes of the exhibition, Mykola Onischenko, and the daughter of witness Zinoviy Maslo, Antonina Naboka. From the UOC of the Kyiv Patriarchate in the presentation of the exhibition, on the blessing of His Holiness Patriarch Filaret, was Pavlo Melnyk, Ph.D., the senior teacher of the Department of Theology of the Kyiv Orthodox Theological Academy.

The exhibition is based on the materials of the expedition on collecting testimonies of victims of the Holodomor, carried out by the staff of the National Museum «Holodomor Victims’ Memorial» in the summer of 2017. As part of the expedition, there were visits to the villages of Fastovsky, Baryshevsky, Obukhivskyi and Kyiv-Svyatoshinsky districts of the Kyiv region and Kyiv, where they recorded testimonies of people who are both victims and witnesses of the Holodomor.

Among them are 99-year-old Oleksandra Zverhovskaya from Maryanivka, 93-year-old forced migrant from Luhansk Mykola Onischenko, 96-year-old Galina Rih, Head of the local lore museum in Berezan,  and the His Holiness, the Patriarch of Kyiv and All Rus’-Ukraine Filaret,  who survived during the Holodomor in the Donetsk region in his childhood.

The memories of people unfamiliar with each other are striking by their typical character, each of which is an additional proof of the crime of genocide committed by the communist Soviet government in relation to the Ukrainians. Excerpts of narrations from each of the ten heroes in the exhibition are interwoven into a single story, sincere and emotional. At the same time, because of indescribable grief from the loss of the closest people, the lost childhood, the fractured fate, the persistence of the spirit of these elderly people, the wisdom acquired during such a difficult life, and … light love for people.

Recall that on November 16, 2017, a meeting with three heroes of the photo exhibition «The Watchmen of Truth» Zinoviy Maslо, Tamara Bedrenko and Mykola Onyshchenko was held in the Hall of Memory of the National Museum «Holodomor Victims’ Memorial».